Please allow us to give you an overview of some of the cultural highlights of 2013!

2013 was a very productive year for Dutch Culture in the United States, with an unprecedented amount of successful projects and events. The Cultural Department at the Consulate, which has a US-wide role in supporting Dutch arts and culture, assisted and/or promoted some of the best of Dutch art that came to the US. Please allow us to give you an overview of some of the highlights!

Several Dutch architecture firms and designers won commissions and continued to work in the US in 2013. A selection: Amsterdam-based Concrete was selected to design the food court for Westfield at New York’s redeveloped World Trade Center and the design for skyscrapers at Harborside Plaza in Jersey City, NJ. Piet Boon is working on the design of a new residential complex in Williamsburg, Brooklyn, NY, while finishing his luxury condo highrise Huys on Park Avenue South in New York City. Francine Houben / Mecanoo is finishing the Dudley Municipal Center in Boston, MA, and West 8 completed the first phase of the new Governors Island Park. !melk / Jerry van Eyck had a banner year with the commission for the re-design of public space on the Las Vegas Strip, a commission to re-design the Margaret Hance Park in Phoenix, AZ, and a commission for a masterplan and re-design of the downtown Scottsdale Civic Center Mall in Scottsdale, AZ. UC Davis selected emerging Dutch practice SO-IL to design a new campus art museum, and Rem Koolhaas / Office for Metropolitan Architecture was chosen to re-design a large swath of Miami Beach by winning the bid for the Miami Beach Convention Center, and by receiving commissions for the new Faena Arts Center and a mid-rise residential complex for the Terra Group in Coconut Grove.

A team of Dutch designers and thinkers, including Hella Jongerius, Rem Koolhaas, Irma Boom, Gabriel Lester, and Louise Schouwenberg, reconceived the Delegates Lounge, one of the most essential spaces in the United Nations headquarters in New York. The lounge is a meeting place for world leaders and thousands of politicians, policymakers and diplomatic representatives of the 193 member states of the UN.

Furthermore, the strength of Dutch 3D printing in art and design can be seen in the ‘Out of Hand: Materializing the Postdigital‘ exhibition at the Museum of Arts and Design. This fall, iconic Dutch design company Kikkerland launched its first retail venture into brick and mortar with a flagship store in the heart of Greenwich Village, NYC. The Art Institute of Chicago presented ‘3 in 1: Contemporary Explorations in Architecture and Design’ with an ambitious presentation by Dutch designers Scholten & Baijings, and design studio Metahaven exhibited in MoMA/PS1. Also, Dutch designer Piet Hein Eek was on view with Ruinart at Art Basel Miami Beach and Simon Heijdens for Perrier-Jouet at Design Miami/2013. Daan Roosegaarde won the World Technology Award in the category “Design”.

For the second time, The California College of the Arts hosted some of the most exciting Dutch designers in the fields of architecture, industrial design, graphic design, and interaction design during their own Dutch Design Week and Otis College of Art and Design followed suit by again hosting a group of experimental and forward thinking Dutch graphic designers during its second Design Week in June. 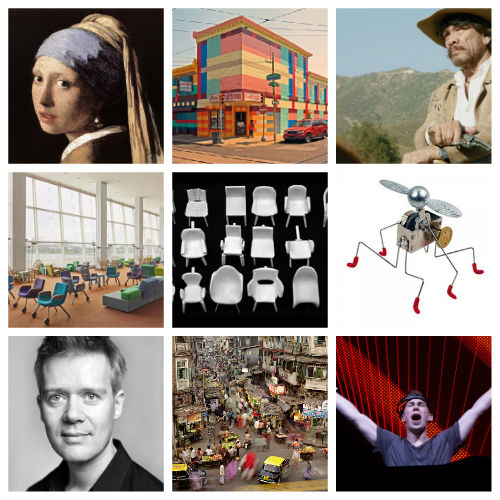 The legacy of New Amsterdam and New Netherland continued this year with new literature, as well as educational programs for teachers and young emerging scholars. Shot in ten countries over four years, The EMPIRE project examines the immersive consequences of Dutch colonialism. Eline Jongsma and Kell O’Neill’s documentary screened at the New York Film Festival and REDCAT festival this year.

There was still a lot to learn about our own history in the year 2013. The 2013 New Netherland Seminar entitled “The Dutch Revolt and New Netherland” was held on October 5 at the New-York Historical Society. Young academics met established scholars to discuss their research on New Netherland at the Consulate General in NY, during a Emerging Scholars Roundtable. Lastly, we reinforced our relations with the Native Americans this summer during a Two Row Wampum ceremony at the Hudson River.

Dutch DJs are among the most popular in the world and this year there were more than 400 Dutch EDM activities in the United States.

The Fourth of July is a magical time of the year and in 2013 the Dutch took over New York on July 4th, and presented Dirty Dutch featuring Chuckie, Gregori Klosman at the beautiful outdoor beach venue of Governors Island. Moreover, plenty of Dutch DJ’s toured the US this year, including Afrojack, Tiesto, Dash Berlin, Saskia Laroo, Chuckie, Bingo Players, Sander van Doorn, Sunnery James & Ryan Marciano, Sidney Samson, Quintino and of course Hardwell, who has been announced as the #1 DJ in the world.

During the holiday season, most Dutch DJs are performing in the US: http://bit.ly/1c3DtYI

The world premiere of a Documentary on the Philly Painting Project of the artists Haas&Hahn (Jeroen Koolhaas and Dre Urhahn) took place at the Dutch Consulate-General in New York. Moreover, the Dutch have won several prizes at this year’s  Chicago International Childern’s Film Festival.

Fished for over a thousand years, the Hollandse Nieuwe (Dutch New Herring) is a phenomenon that has become a national cultural icon. More recently, the Dutch herring fleet has lost a great deal of its importance as only two vessels are now fishing for herring under the Dutch flag. The documentary ‘Raw Herring‘ premiered at the Tribeca Filmfestival in New York, as well as Paul Verhoeven’s ‘Steekspel’.

On October 13, the US premiere of Tula. The Revolt, a film featuring Danny Glover, took place at the Seattle Social Justice Film Festival.

At the end of the year Film Forum New York hosted the world theatrical premiere of The New Rijksmuseum, a documentary by Oeke Hoogendijk. An other documentary, Dutch Influence, about the success of the Dutch electronic music scene, made its North American debut at the CBGB’s Film Festival October 11. World-renowned Dutch house DJ’s like Tiësto, Armin van Buuren, Nicky Romero, Afrojack and more are featured in the film about fame, celebrity and the head-spinning popularity of Dutch DJs around the globe. And, finally, with help of the Consulate in NYC two US screenings of the George Sluizer movie ‘Dark Blood‘, starring River Phoenix and co-starring Jonathan Pryce and Judy David, were an opportunity to see a movie that otherwise would have been lost.

The Dutch Masters were popular as always in the USA this year. Vermeer’s Girl with a Pearl Earring, a stunningly beautiful Dutch girl whom many men had a crush on for years, finally returned to the United States as part of the special exhibition ‘Vermeer, Rembrandt and Hals: Masterpieces of Dutch Painting from the Mauritshuis’ in San Francisco, Atlanta, and New York. The National Gallery of Art announced the acquisition of a Dutch masterpiece by Gerrit van Honthorst (1592–1656), considered one of the greatest painters of the Dutch Golden Age and The Phillips Collection in Washington DC presented Van Gogh: Repetitions.

Vermeer painted less than forty pictures during his career and, Young Woman Seated at a Virginal, is believed to be one of his last. Philly Museum of Art displayed this work in 2013; almost ten years since a painting by Vermeer has been on view in Philadelphia.

‘What Vincent Saw’ ran unitil November at the Art Institute of Chicago and was a special exhibition about the places which are captured in Van Gogh’s paintings, visited and photographed by Daniel Catton Rich, Peter Pollack and Vincent Willem van Gogh.

The year started well with the Dutch presence at the APAP and IPAY festivals for performing arts with Edit Kaldor’s “C’est du Chinois” at the Under the Radar Festival and Collective 33 1/3’s “Bluebeard” at the Prototype Festival. Dance company De Stilte and Etienne Borgers were presented during the IPAY Showcase.

We are proud that this year The Royal Concertgebouw Orchestra performed at Carnegie Hall and Kennedy Center in Washington DC, and The Netherlands Dance Theater at the Lincoln Center (presented by the Joyce Theater) as well as several other places at the East and West coast.

Also worth mentioning: Michel van der Aa won the 2013 Grawemeyer Award for outstanding works in contemporary music for his multimedia cello concerto Up-close, which offers a unique blend of cello concerto with film. Additionally, Van der Aa was presented at the White Light Festival in Lincoln Center and at the 21c Liederhandfestival. There are further North American performances in the new year, when Johannes Moser and the Los Angeles Philharmonic give the West Coast premiere on January 28. This is followed by performances in Seattle in February given by Julie Albers and the Seattle Chamber Players.

Lastly, 2013 was the year of ‘baroque pop multi instrumentalist’ Jacco Gardner. After taking Europe and the USA by storm and releasing two killer singles and his critically acclaimed full-length album “Cabinet of Curiosities”, Gardner returned with two new, exclusive tracks for Trouble in Mind.

In September the Consulate supported a wide array of Dutch photography at the Photoville Festival in Brooklyn with special presentations by among others FotoFestival Naarden and Noorderlicht, and Dutch mural and street art was showcased during Art Basel in Miami. In the summer of 2013, students were able to participate in the first Marfa Summer School in Marfa, TX, a new initiative by TAAK (Amsterdam) in collaboration with a number of Dutch and American art schools that allowed students to explore the dynamics and social impact of art in this staggering little desert town.

In August Grand Valley State University spearheaded a unique set of exhibitions on the life and work of 81-year old Dutch artist Cyril Lixenberg. Additionally, The Hirshhorn Museum and Sculpture Garden organized an exhibition with Gerco de Ruijter in its Black Box series, and the Philadelphia Museum of Art presented a solo exhibition by Manon the Boer in early 2013, followed by Fiona Tan: Inventory, a multiprojection installation inviting viewers to consider museum collections as well as the human compulsion to capture the transience of time and lived experience. An just before the end of the year, the Museum of Fine Arts in Houston opened the “Bureaucratics” solo exhibition by Jan Banning.

In November Performa presented “Super-Sargasso Sea (phantom play #1),” a new performance by Gabriel Lester at the Abrons Arts Center in New York. Lester’s new performance is a fragmented and atmospheric exploration of the powerful narrative qualities of light and sound. Also in November, The Museum of Art | Fort Lauderdale opened the exhibition “Spirit of Cobra,” a prelude to a much larger traveling exhibition in 2016 on the influences of Cobra. Organized by the Cobra Museum (Amstelveen, Netherlands) and Nova Southeastern University’s Museum of Art | Fort Lauderdale. In the same month, The Drawing Center presented William Engelen: Falten, an exhibition of a new series of musical scores for percussion.