A Dutch Halloween in New York

Celebrate a Dutch Halloween in New York with Pacha

This weekend and the week after Pacha New York hosts a wide array of Dutch Dj’s including the number nine Dj of the world Dj Afrojack.

Starting on October 25th Laidback Luke will kick of a week of Halloween celebrations. In 2012 the evolving Dutchman took to the USA with his initial bus tour ‘Speak Up’ invading fans’ cities across the nation with a bangin’ show on wheels. After the success of this premier tour, 2013 sees Luke ditch the jets for the bus again with ‘Musically Driven’. With a truckload of staggering production and visual elements while welcoming his newest recruits in Moska and D.O.D, the bus is on boost! Sparking unpredictable and dynamic electricity the tour isn’t driving on gas- just music! Stirring up the tour circuit with full energy, Laidback Luke also recently began a solid residency ‘Revolt’ at Las Vegas’s new premium party spot Hakkasan.

October 26 Sander van Doorn take the booth at Pacha NYC. Van Doorn is without a doubt one of the world’s most essential, influential and popular DJ/Producers in dance music today. Sander has become synonymous with excellence – both production wise and in front of the thousands he plays to, nightly. He is truly one of the strongholds in dance music. A generation defining artist, that reshapes our perception of what dance music can be and he does it all with that electrifying Sander van Doorn-smile.

On Halloween night the number nine Dj of the world, Dj Afrojack, will haunt Pacha NYC. In the span of less than 2 years, Afrojack has become one of electronic dance music’s major icons. From humble DJ beginnings in his native country of Holland, he has grown to become a multi-award winning, platinum-selling producer. His skills are some of the most sought after in the world, and with two Grammy Awards under his belt, it’s easy to see why. In addition to this, his DJ sets have fast become both iconic and unparalleled, providing an explosive take on the current state of dance music across the board.

Come November first and Don Pepijn Schipper, known to the musical world as Don Diablo takes the stage. At fourteen he started a successful club night and raised enough money to build his own studio. One thing led to another and he was offered his first record deal after his friends sent out some of his demos. ‘It was a very exciting time, no boundaries; I was able to grow up with freedom. At first I mainly worked as a ghost producer for other people, trying out all sorts of different styles and through all of these different influences I developed my own sound.’ Since then he’s collaborated with the likes of Example, Diplo, Angela Hunte, Laidback Luke, Noisia and Dragonette and remixed a diverse array of artists that includes Public Enemy, Martin Solveig, Macy Gray, The Chemical Brothers, Gorillaz, Tinie Tempah, Cassius and many others. 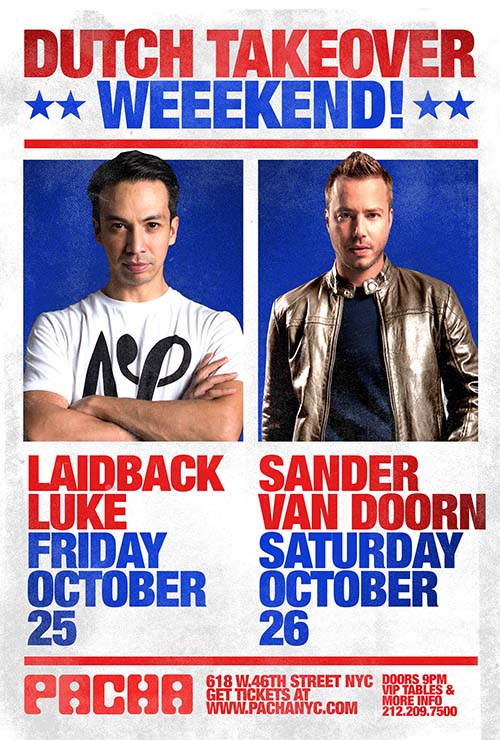