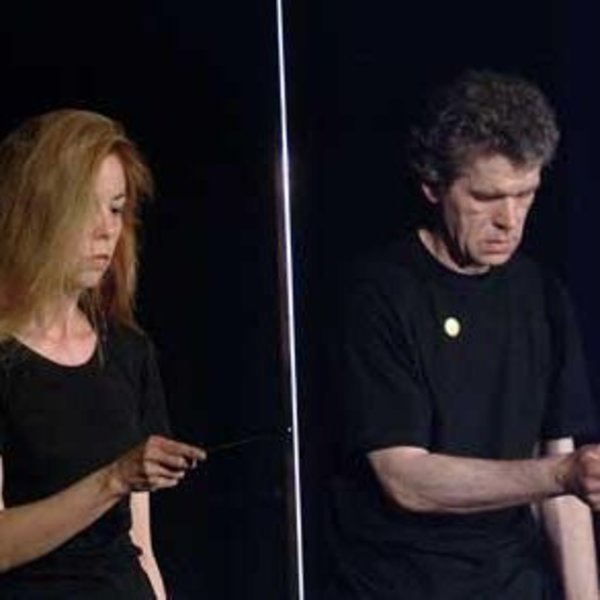 The AC Institute in New York has recently published 4 recordings of  sound artists Mario van Horrik and Petra Dubachin’s “WAVES” project in a podcast on their website.

Three of the recordings are made in 2016 and 2017 in an empty church in Eindhoven, using two 50 meters long strings with 3 different feedback systems. The 4th recording was made in their studio using a feedbacking guitar, a magnet and a short metal rod.

is a system where each string is amplified and prepared (small objects are hanging from the strings, like curtain hooks and such). The vibrations of the strings slowly “transport” the objects along the length of the strings. So there is no human interference; the system produces, mixes and changes it’s own sounds. We followed the roman catholic mass division: Introïtus, Kyrie, Sanctus, etc.

Dr. Jekyll and Mr. Hyde has the same setup as “Introïtus” , but now the sound signal of the first string “steers” the second string and vice versa. So the strings are interactive with another. Where the strings interact with each other we titled them famous couples like Adam and Eve, Lennon and McCartney, Charles and Diana.

(DIATRYPE BULLATA)
has the 2 strings driven by an external sound source. In this case a mike placed on the alter of the church. The whole system is interactive with the architecture of the church and changes in the sounds are caused by Petra who is slowly moving through the space. We titled them after fungi that specifically are interdependent: they grow on trees or plants and take vitamins out of the plants, but give minerals to the plants. If one of them dies, the other dies as well.

is created by a magnet with a piece of metal that is dancing on the feedbacking strings of a guitar, making a rhythm.Slow movements of Petra around the guitar and the instability of the system give it the character of a minimal music piece. “He” is one of the many nicknames James Joyce made up for one of the characters in Finnegan’s Wake.

"Our work is concerned with the relationship between the elements of 'sound,' 'Movement,' and 'image'; all in the widest meaning of the word. We are well aware of the fact that one element cannot exist without the others. This awareness is the basic interest from which our words emerge; and the works leads us towards new and always changing relationships between the elements' 'image,' 'movement,' and 'sound;' all in the widest meaning of the words." Petra Dubach/Mario van Horik, 1993, Plasy

Mario van Horrik and Petra Dubachin are  sound artists from the Netherlands. Their work combines sound, movement and image in all possible combinations.  ”Without movement there is no sound and vice versa.”  They present installations, concert, performances and  in situ projects world wide and since 1983.