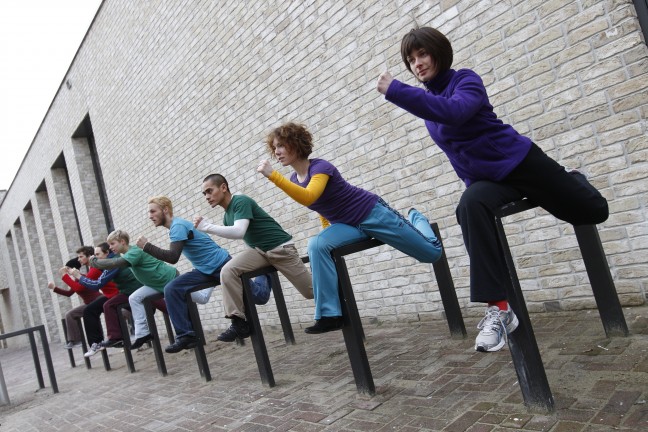 Throughout February, Arch8 will tour the United States with their dance performance “Tetris.” In January 2016, Tetris won the People’s Choice Victor Award at IPAY 2016 in Montreal.

“Tetris” is a dance quartet that uses the shape games of Tetris, along with audience interaction, to explore the themes of belonging, curiosity, and playfulness. It doesn’t ask how we can fit into the world, but how we can change the world to fit who we are. It is suitable for audiences of all ages and through inclusion it expands the definition of what dance is.

Not an everyday dance company, Arch 8 views theatrical tradition as a resource from which to create new forms. They then share these new forms in public space, architectural space, and theatrical space.

Arch 8 create dance performances for ages 6 and up utilize a high degree of interactivity in their work. They consistently encourage an active viewing, a participatory imagining on part of the public. With its innovative approach, the company has performed around the globe, including St. Petersburg, Istanbul, Cairo, New York, San Francisco, Vancouver, Senegal, and throughout Europe. The company has also made collaborative performances with local artists in Benin, Senegal, Alexandria, Cairo, Frankfurt, Dusseldorf, Utrecht, the Hague, Maastricht, and Hasselt.

Choreographer Erik Kaiel has been making dances for many years. In subway stations, sculpture gardens, empty swimming pools, city streets, and occasionally on stage. In 2003, after a decade in New York City, he moved to the Netherlands. He performs, choreographs, and teaches throughout the Netherlands, Europe, and the world. Erik is the artistic director of Crosstown Den Haag, a choreographic fellow at Danslab, and a faculty member at the Artez Dance Academy in Arnhem. In 2010 he won the Dutch national prize for choreographic talent and the No Ballet Competition in Germany.