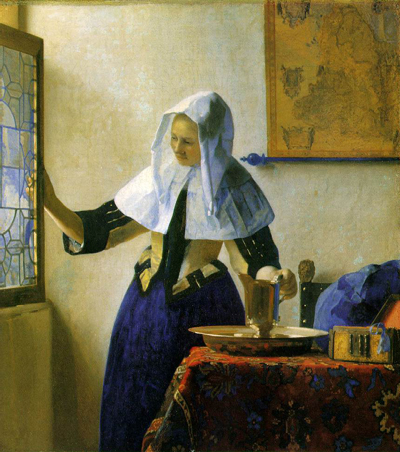 Linda Blair presents a five-part lecture series covering 17 Century Dutch Art, one of the most glorious eras in Western art which produced names like Rembrandt, Vermeer, Frans Hals and many other artists. The lecture series takes place at Athenaeum Music & Arts Library in La Jolla on Thursdays, January 15, 22, 29, February 5 and 12, at 7:30PM. Admission is $60 for members, $85 for nonmembers. Individual lectures are $14 for members and $19 for nonmembers. More info and tickets here.

It is not an overstatement to refer to 17th century Dutch art as the Golden Age, for it is one of the most glorious eras in Western art. In the space of just three generations, tiny Holland bursts forth with genius—Rembrandt, Vermeer, Frans Hals and many other brilliant, innovative artists—and then, having done so, wearily sinks back, never to do so again (Van Gogh did not achieve his mature vision until Paris). In addition, the Golden Age was uniquely innovative: true landscape painting is conceived; still-life paintings acquire new, expressive language; and the first genre art is created.

Sold out
Art must be placed within its historic context to be fully understood; this first class will examine Dutch economic, political and religious factors seeking clues to explain why such artistic genius flourished in this time and place. An overarching factor is 17th century Holland’s uniqueness within the European experience. Its long, ultimately victorious war of independence from Spain freed the Dutch from the only power structures Europe had ever knownâ€”king and Church. A solid middle class emerged and was quickly fortified by the immense riches of its maritime empire, and, lacking sufficient land to build vast estates, and admonished by Calvinist stricture against ostentation, sublimated its wealth into art patronage. (There were more artists than bakers in mid-century Amsterdam.)

This class examines in greater depth the paintings the Dutch loved to see on their walls: landscapes, evocations of a land dearly wrested from the oppressive rule of Spain and from the sea; still lifes, from glorious floral bouquets sparkling with butterflies to dour skulls and smoking candles; and genre painting, the latter evidence of a people able to laugh at themselves and their foibles.

This class will be a meditation on Jan Vermeer, an artist today celebrated in literature and movies, but after his death forgotten until the 1850s, when a French art critic stumbled upon a masterpiece (View of Delft) by a mysterious artist he thought might be named Meer, and devoted the rest of his life to searching out more “Meers.” Today, of course, Vermeer’s crystalline cubes of light-filled space and masterful reflections make him one of the most revered of painters.

When the young Rembrandt arrives in Amsterdam in 1631, he is not only ambitious, but, judging from his self -portraits of that period, brash and cocky, confident of his artistic power. Determined to prove that he was the equal of the Flemish artist Peter Paul Rubens, recognized by all Europe as the greatest artist of the age, Rembrandt paints in Rubens’ Baroque style. But a decade later, Rembrandt realizes that despite the drama and theatrical lighting effects of Baroque art—characteristics he will retain—he needs to seek a different, more profound, art. In short, his unrelenting need for drama deepens, as he moves toward the drama of the soul.

In his last years, buffeted by grievous personal and financial losses, Rembrandt turns inward; the cockiness of youth yields to a tragic vision of age and loss. Western art has never experienced such magnificent examinations of what it is to be human. Rembrandt’s portraits present compelling, sentient beings, who think…feel… remember. This is an art that reveals us to ourselves, informs us, defines and enlarges our humanity. In these classes, we always speak of the role of art within its given society, but Rembrandt’s evocations of man’s inner life and of the tragedy of life, makes his art universal, transcending boundaries and borders, time and place.