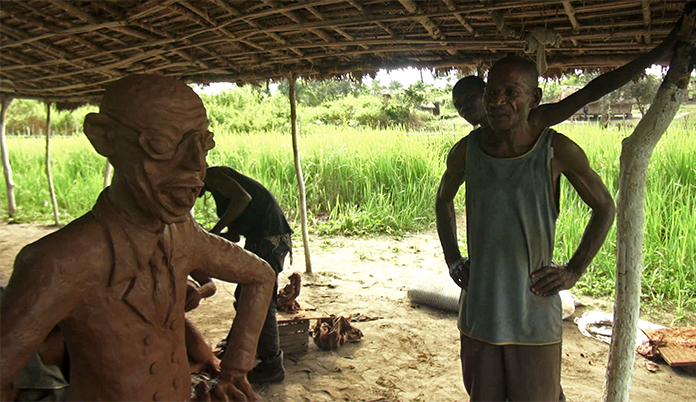 From January 29-March 27, SculptureCenter will present the first exhibition of the Cercle d’Art des Travailleurs de Plantation Congolaise(Congolese Plantation Workers Art League or CATPC) in the United States. Creating sculptures with cacao as a primary material, the artists that comprise the CATPC are plantation workers who harvest raw material for international companies. The project is a collaboration with their sister organization the Institute for Human Activities (IHA). The IHA has been working in Congo since 2012, where it attempts to diversify the local economy through critical artistic engagement. Dutch visual artist Renzo Martens is its founder.

In the Congo, as elsewhere, plantation workers are grossly underpaid for their contribution to global industry, whether to the $100 billion chocolate industry or to the production of palm oil, broadly used in common household products. The Congolese plantation laborers cannot actually afford to live off of the wages they receive for their work and survive without basic amenities such as clean water and electricity. By using material sourced from cacao plantations worldwide instead to make artworks, the members of CATPC can occupy another place in the global value chain, one normally reserved for middle class artists.

Many of the sculptures created by CATPC members are future, present, and ancestral self-representations, and take up symbolic figures such as the art collector. First molded from clay, then 3D printed and cast in chocolate, the sculptures are made in collaborative settings and the materials used refer back to and overwrite the exploitative economics of global trade. The CATPC reinvests profits in new, self-owned, and regulated agricultural production-provoking questions about the division between those who should work on plantations and those who are allowed to reflect on this, about the inherent value of art and its market, and challenging art’s potential as a tool for broader social change.

Unprecedented wealth (financial and cultural) has been extracted directly from plantations worldwide and redeployed in the production and acquisition of art in major global cities, resulting in local gentrification and the reaffirmation of class disparities. One striking example may be the Unilever Series at Tate Modern, funded by a corporation that has a large stake in the Congo. How can we assess the conditions and motivations around the consumption of critically engaged art when it is funded by plantation economies? What is the value of art that is not only about a site of conflict as a subject, but actually originates from that place? Can we extract wealth from the art system and repatriate it to the plantations where it originates? Can art turn the plantations into inclusive and ecological test sites? 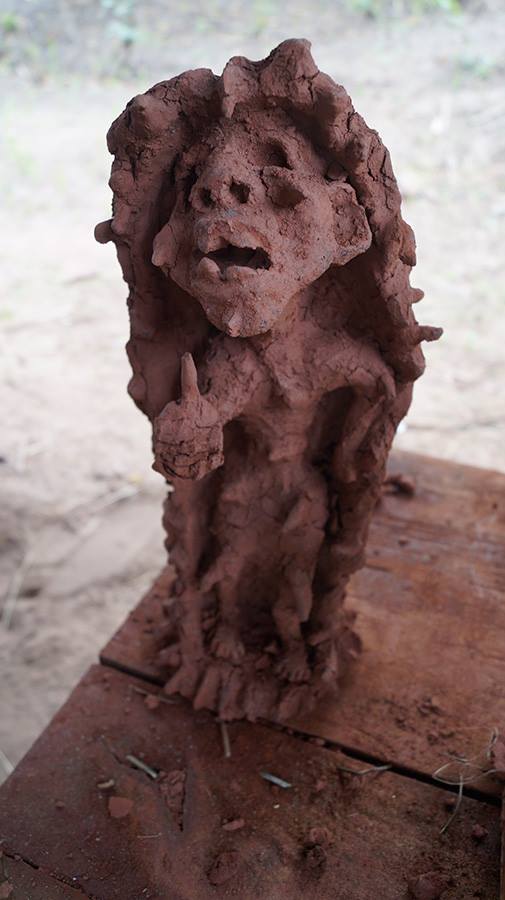 In collaboration with their sister organization the Institute for Human Activities (IHA), CATPC is currently building a research center in Lusanga on a former Unilever plantation in a remote rainforest within the Democratic Republic of Congo, which aims to put the quintessential white cube to service as a vector for social and environmental change. Its location is of crucial importance: the research center is constructed in Lusanga, formerly Leverville, where the Lever Brothers (later the Unilever company) founded their first palm oil plantation in 1911. It is here, at heart of the plantation system, at the crossroads of ecological and economic urgencies, where the research center will establish a program to redefine the mandate of art.

This exhibition will include existing and new sculptures and drawings produced by members of the CATPC, as well as materials about the larger activities and context of the IHA in the Congo. A series of public programs on topics raised by the exhibition will be announced at a later date.

Renzo Martens was born in 1973 in The Netherlands. He lives and works between Amsterdam, Brussels, and Kinsahsa, Democratic Republic of the Congo. He is a filmmaker, artist, and the founder & director of the Institute for Human Activities (IHA). With the IHA and CATPC, he has organized exhibitions such as A Lucky Day, KOW Galerie, Berlin (2015); The Matter of Critique, KunstWerke Berlin (2015); A New Settlement, Galerie Fons Welters, Amsterdam (2015); and A Capital Accumulation Program, The BOX Gallery, Los Angeles (2014). Martens and the IHA have also been featured in Artes Mundi 6, National Museum Cardiff, Wales (2014); 9 Artists, Walker Art Center, Minneapolis (2014); and Forget Fear, 7th Berlin Biennial, Berlin (2012). Episode III, a.k.a Enjoy Poverty, his critically acclaimed documentary filmed in the Congo, was first shown at the Stedelijk Museum Bureau, Amsterdam in 2008. This and other films have been shown at the 6th Berlin Biennial, Tate Modern in London, Centre Pompidou in Paris, Van Abbe Museum Eindhoven, Kunsthaus Graz, as well as at numerous film festivals and on public broadcast channels. Martens was named a Yale World Fellow in 2013.