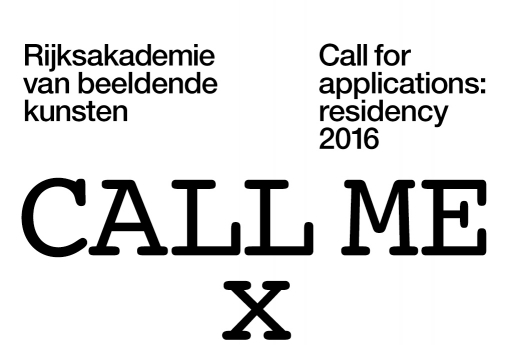 Application for the 2016 Residency at Rijksakademie van beeldende kunsten in Amsterdam is possible until February 1st.

Application for the residency January – December 2016 at the Rijksakademie van beeldende kunsten in Amsterdam will be possible from 1 January until 1 February 2015.

Application is open to upcoming artists with a few years of professional experience after their education. Most candidates have a MA degree and are between 25 and 35 years old.

Artists who are or were connected as participant to another post academic institution in the Netherlands (Jan van Eyck, De Ateliers), will not be considered for a Rijksakademie residency.

The selection procedure consists of a number of rounds which take place from March until June. All applications are considered at first. In the following rounds, works are examined in more depth, looking at the vision of the artist about their own work and their motivations for coming to the Rijksakademie. Artistic quality, possibilities for development and the place in their career are considered. The jury (consisting of artists and theoreticians affiliated to the Rijksakademie as advisor) invites a few candidates for an interview with the selection committee in June, and forms the last round of the selection procedure.

The Mondriaan Funds supplies stipends to individual artists who wish to participate in the Rijksakademie program. Applications from Dutch artists and artists based in the Netherlands will be considered in collaboration with the Mondriaan Fund.

A number of candidates are invited for an interview in June at the Rijksakademie in Amsterdam.
An application consists of:
– the online application form, completed (the form will be available online from 1 until 31 January)
– documentation of work
– CV
A non-refundable application fee of 50 euro is charged, with an exception for artists living in the following countries (more information in the application form).

A studio, stipend (in 2015: €12,200) and working budget (in 2015: €1,500) form part of the facilities.
The Rijksakademie is partly supported by the Dutch government and the Mondriaan Fund. The Rijksakademie Trust Fund—in cooperation with the Rijksakademie and resident artists—raises additional funds from private and governmental foundations, corporations and private donors, both nationally and internationally. Every resident artist is asked to raise a Fellowship of € 15,000, preferably in their home country. Selected candidates will be provided with more information after the interview round.

The annual contribution is €2750, to be paid before the start of the residency.

Questions about the application:

Application for the 2016 residency