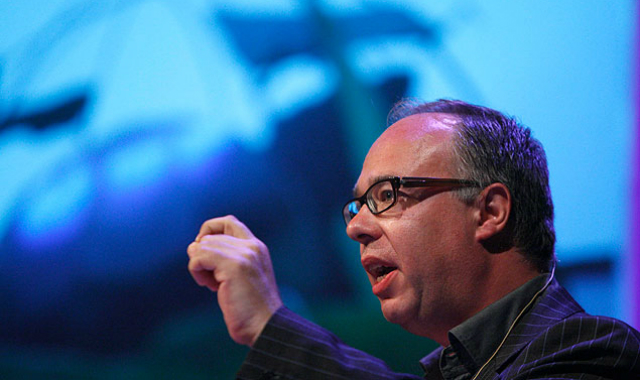 On January 15, 2014 The Center for Curatorial Studies at Bard College (CCS Bard) announced that Charles Esche, Director of the Van Abbemuseum, Eindhoven, Netherlands and Co-Director of Afterall Publishing, Central Saint Martins, London, England, is the recipient of the 2014 Audrey Irmas Award for Curatorial Excellence. The award with the Audrey Irmas Prize of $25,000 will be presented by Lauren Cornell, Curator, 2015 Triennial, Museum as Hub and Digital Projects, New Museum, at a gala celebration and dinner on April 2, 2014 at 6:30pm in New York City. Esche is the seventeenth recipient of the award.

For almost two decades, Charles Esche has been a protagonist in reshaping the curatorial landscape.  His work as a director of important European institutions, curator of major biennials and both writer and publisher of critical texts have sought to investigate the role of art as a catalyst for social change and the societal or political contexts in which art comes to be made public.  His commitment to different forms of pedagogy and experimental institutional models has profoundly influenced exhibition practices today.

Since 2004, Esche has been Director of Van Abbemuseum. In 2010, he established the L’Internationale confederation together with 6 other European museums from Istanbul to Madrid. The initiative aims to construct a pan-European modern and contemporary art institution by 2017.  Between 2000 and 2004 he was the Director of Rooseum Center for Contemporary Art in Malmo, Sweden. Before that Esche was at Tramway, Glasgow (1993-97) and founded the proto-academy in Edinburgh (1997-2001).

He is co-founder and co-director of Afterall Publishing with Mark Lewis. Afterall is a contemporary art publisher, which was launched in 1998 and is based at Central Saint Martins, University of the Arts London. It publishes a four-monthly journal in partnership with M KHA, Antwerp, and the University of Chicago, the One Work of Art series, and Exhibition Histories in partnership with CCS Bard. Afterall also produces occasional readers such as Art and Social Change edited by Esche with Will Bradley.

This year, Esche will curate the 31st São Paulo Bienal with Galit Eilat, Pablo Lafuente, Nuria Enguita Mayo, and Oren Sagiv. He has co-curated a number of international contemporary art biennales and other events including: It Doesn’t have to be Beautiful Unless it’s Beautiful at National Gallery of Kosovo, Prishtinë, 2012; Strange and Close, CAPC, Bordeaux, 2011; An Idea for Living, U3 Slovene Triennale, Moderna Galerija, Ljubljana, 2011. In 2009 and 2007 he was co-curator with Khalil Rabah and Reem Fadda of the 2nd and 3rd RIWAQ Biennials, Ramallah, Palestine. In 2005 he curated the 9th International Istanbul Biennial with Vasif Kortun, November Paynter, and Esra Sarigedik ; and in 2002 the 4th Gwangju Biennale, Republic of Korea with Hou Hanru and Song Wan Kyung. In 2000, he curated Intelligence: Tate Triennial at Tate Britain, London with Virginia Button, and Amateur: Variable Research Initiatives at Kunstmuseum, Göteborg with Adam Szymczyk and Mark Kramer.

In 2012 he received the European Cultural Foundation’s Princess Margriet Award for Cultural Changemakers in Brussels and in 2013 the Minimum Prize from the Pistoletto Foundation, Biella. Esche was born in 1962 in England and lives between Edinburgh, Eindhoven and São Paulo.

The award has been designed by artist Lawrence Weiner, and is based on his 2006 commission Bard Enter, conceived for the entrance to the Hessel Museum of Art at CCS Bard. The award also comes with the Audrey Irmas Prize of $25,000.

For sixteen years, the Center for Curatorial Studies at Bard College has celebrated and awarded the individual achievements of a leading curator or curators whose lasting contributions have shaped the way we conceive of exhibition-making today. For the third time, the 2014 award will be given under the name of patron Audrey Irmas, who has bestowed the endowment for the Award. Irmas is a board member of CCS Bard and an active member of the Los Angeles arts and philanthropic community.

About the Center for Curatorial Studies

The Center for Curatorial Studies at Bard College (CCS Bard) is an exhibition, education, and research center dedicated to the study of art and curatorial practices from the 1960s to the present day.

In addition to the CCS Bard Galleries and Hessel Museum of Art, the Center houses the Marieluise Hessel Collection, as well as an extensive library and curatorial archives that are accessible to the public. The Center’s two-year M.A. program in curatorial studies is specifically designed to deepen students’ understanding of the intellectual and practical tasks of curating contemporary art. Exhibitions are presented year-round in the CCS Bard Galleries and Hessel Museum of Art, providing students with the opportunity to work with world-renowned artists and curators. The exhibition program and the Hessel Collection also serve as the basis for a wide range of public programs and activities exploring art and its role in contemporary society.

For more information on the Audrey Irmas Award for Curatorial Excellence Award Gala Dinner or to purchase tickets, please contact: