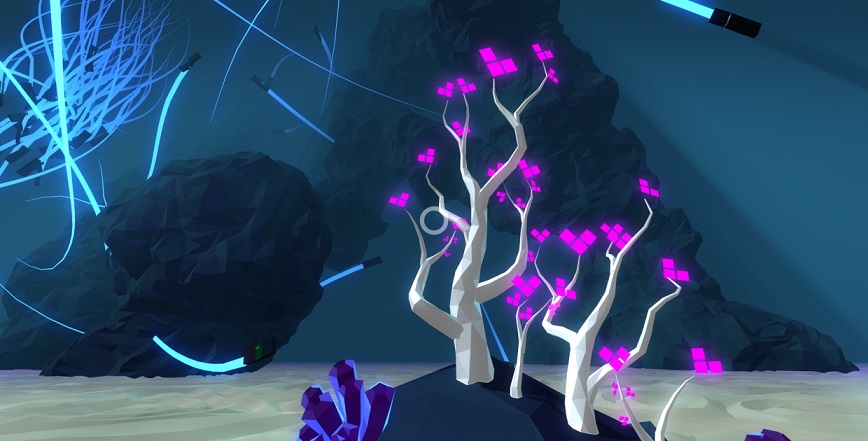 A virtual reality 'game' that teaches you how to breathe

DEEP is a Virtual Reality film that teaches you how to breath constructed with game-elements, created by Owen Harris and Niki Smit. It already is a very good year for DEEP, as it will be screened at Tribeca Film Festival, and even won the Doc Leipzig Award!

”For ubanites who find themselves growing disenchanted with the noise and congestion of big cities, the Virtual Reality project DEEP is a film you have to see definite. DEEP is a Virtual Reality game very accesible for both adults and the younger ones. “The idea is that it’s better for us to get into the habit of breathing slowly and deeply into our diaphragm, rather than quickly and shallowly into our chest.”

This deeply meditative and thrillingly psychoactive VR journey from co-creators Owen Harris and Niki Smit is wholly controlled by the user’s breathing. Players wander through a beatifully immersive underwater seascape that’s at once soothing and surprising, compeling us to comfortably question the ways in which our body and mind can work in union, free of stress or anxiety.

In an interview with Tribeca, Smit recounted the first time she saw a user lose himself in the experience: ‘I saw my player going quiet. His movements became more subtle, his breathing changed, and when he finally came out, he was suddenly very soft-spoken. Almost shy. Just grinning and nodding a lot. It was the first time I realized how big this breathing impact can be on people.’

Cinekid started 30 years ago as a new initiative of theatre and conference centre De Meervaart in Amsterdam. It was the year in which the Dutch film was put firmly on the map with titles such as The Assault, Abel and Flodder. Dissemination of culture was a broadly shared ideal. Ten years earlier the Berlin film festival started a subdivision for children and the first film festivals for youth appeared.

Cinekid also had its own TV corner in De Meervaart. One screen, a video recorder and some cushions on the ground. No matter how small, the roots of the present Cinekid were here. The foundation is now regarded as a global multimedia player with a maximum coverage of the primary target population.