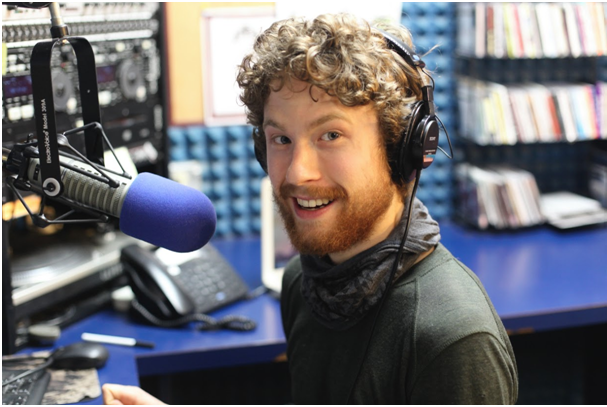 If you ever thought Dutch Hip-hop is confined within its country’s borders, Jack Ewers is proving
you wrong. His weekly radio show “Netherlands in Alaska” introduces Dutch Hip-hop artists to an Alaskan audience.

“It is now 5pm in Emmonak and 3AM in Duiven: this is Netherlands in Alaska!” With this message Jack typically opens his hour-during radio show, linking a random place in Alaska to a random Dutch Village. Jack’s radio program “Netherlands in Alaska” airs every Saturday on KSUA 91.5 FM College Radio in Fairbanks, Alaska. Asking him how this slightly unusual idea came into existence Jack explains that he first came in touch with Dutch Hip-hop music while he was living in Fairbanks.

‘Als ze langsloopt’ by Flinke Namen was the first Dutch Hip-hop song that came to Jack’s ears and sparked his interest for the music. With the help of YouTube Jack was able to explore more Dutch artists. After moving to the Netherlands, where he learned to speak fluent Dutch in just eight months, Jack familiarized himself with the local Hip-hop scene and decided to transfer the music to Alaska.

While new media and interactive entertainment channels are gaining ground elsewhere, radio is still a popular medium for the Alaskans. Radio stations, especially those that are non-commercial or public in nature, are not merely used to broadcast mainstream music, but also offer a platform for local bands and musicians.  In rural areas radio is often still used as a vital lifeline as well as a means of connecting with the outside world.

The unusual blend of Dutch Hip-hop music in Alaska turned out to be an unexpected success. Not only has Jack received many positive reactions, his program also received the ‘Alaska Broadcasters Award’ for Best College Radio Program on KSUA 91.5 FM, a station which was among other accolades was named the Best College Radio Station in the United States by MTV in 2013. The success of his show came a bit as a surprise to Jack, who was slightly concerned his program would only attract one-time listeners. Instead “Netherlands in Alaska” has a substantial group of regular listeners from whom Jack receives many compliments.

When asked why people in Alaska would like Dutch Hip-hop music Jack explained that the answer is threefold. First of all the language barrier is not a big problem, since many people don’t actively listen to the lyrics of songs in English. He adds that the guttural sounds of Dutch, such as the harsh ‘ch’ and ‘g’ consonants positively influence the music’s rhythm. Finally, according to Jack,  Alaskans are also very open to other cultures despite their geographic isolation, and consequently like engaging in new musical experiences.

Every week the show features albums from different Dutch artists.  Jack prefers to play full albums on his show in order to give listeners a complete experience of the artist’s work. Every episode also features background information on the musicians, and in addition Jack translates some parts of the lyrics, which he adds to the program’s website.

Jack’s love of Dutch culture has encouraged him to plan other events that link the U.S with the Netherlands. While he’s determined to continue his weekly show, he also hopes to organize a small film festival in his small city featuring Dutch films that are largely unknown to American audiences. He hopes to give fellow Alaskans a more realistic insight into a country that has more to offer than wooden shoes and windmills.

“Netherlands in Alaska” airs every Saturday 5:00pm local time (Sunday 3:00am in the Netherlands) and can be listened to live from everywhere across the globe.