Het Klankcafé, a Dutch radio program, will be making a show on October 12th in The Netherland Club of New York

Het Klankcafé, a Dutch radio program, will be making a show on October 12th in The Netherland Club of New York. Occasion is the premiere of the opera Anaïs Nin & Odysseus’ Women by Dutch composer Louis Andriessen, which will be performed in both New York City and Amsterdam. Het Klankcafé has the honor to present pieces of the production before it will be premiered. In Het Klankcafé director Jorinde Keesmaat will tell all about the opera in a live interview, and mezzo-soprano Augusta Caso will perform some of its pieces. Furthermore, a pre-recorded interview with Andriessen will be presented. Other guests of the show are two Dutch musicians living in New York: composer Ruben Naeff and violinist Tosca Opdam.

Het Klankcafé will be broadcasted on Dutch radio channel Concertzender and on Q2, the contemporary classical music channel of radio station WQXR. Presenters of the show are initiator of Het Klankcafé Louis Gauthier and composor and WQXR presenter Phil Kline. This edition of Het Klankcafé will focus on the historical and cultural ties between the Netherlands and New York. A lot of Dutch musicians started their career in New York. And New York still carries the cultural roots of the time the city was known as New-Amsterdam. Every reason to pay tribute to this special connection.Dutch talent in New York

The free show will be recorded at The Netherland Club, one the oldest clubs of New York City (1903). The club is a meeting point for Dutch people living in the US, and is situated in an amazing spot just around the corner of Radio City Music Hall. Support for this edition of Het Klankcafé comes from The Netherland America Foundation. The team of Het Klankcafé is proud to announce that this show was awarded with a cultural grant. 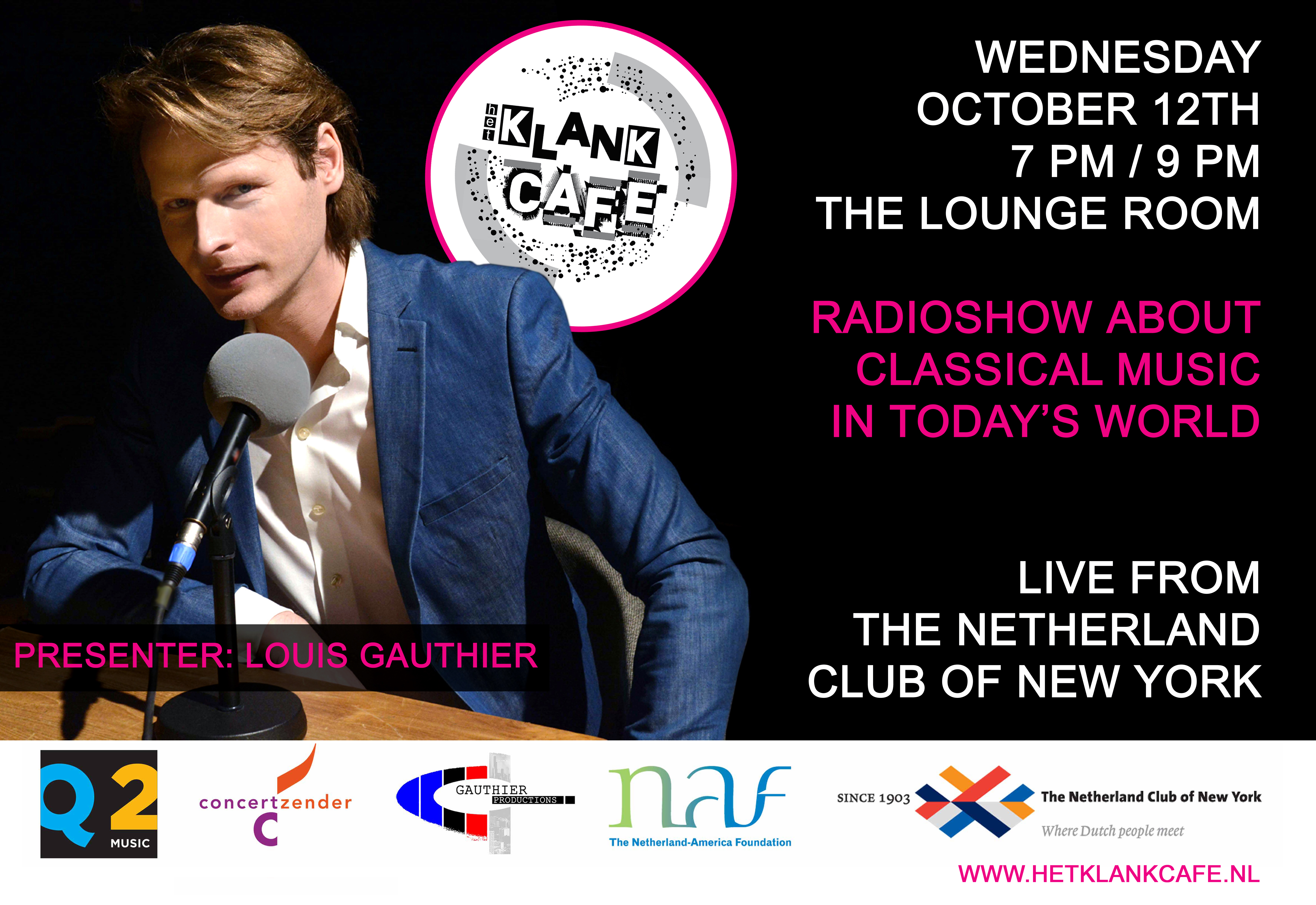 Het Klankcafé, which can be literally translated as The Soundcafé, is a live radio show in which host Louis Gauthier brings classical music to today’s world. Every month Louis welcomes well-known artists as well as yet unknown but promising young performers in a one hour program. During the easy-going, lighthearted interviews Louis gets them to talk about their inspiration, motivation and dreams. The show offers plenty of time for live music. Classical music is the foundation of the show, but jazz, pop and rock influenced by classical music appear in the show as well.

About the Netherlands Club

The Netherland Club of New York is a private club that offers social and business events mixed with Dutch cultural tradition for its members and their guests. Since 1903 the club has been offering a lively meeting point for mainly Dutch people living in and around New York: a touch of Old Amsterdam in the heart of New Amsterdam. They share a historic building with crystal chandeliers, high ceilings with art deco touches. The clubhouse is conveniently located in the heart of Manhattan, just across from Rockefeller Center and off Fifth Avenue.