Now an annual signature program of Asia Contemporary Art Week, FIELD MEETING Take 4: Thinking Practice is a two-day exclusive forum for arts professionals dedicated to newly conceived performances, lecture-performances, and lively discussions by 30 compelling figures, hosted at the Solomon R. Guggenheim Museum & Asia Society Museum, New York on November 11 & 12. Dutch artist Jonas Staal will be virtually present to be one of the speakers at this event.

Emulating the experience of a studio visit on a communal scale, FIELD MEETING yields an experimental and performative realm for creative individuals to embody their work through their own presence to an audience of New York & US-based curators, scholars, and museum directors. The program transcends conventional educational symposia to stage a showcasing of people, their ideas, research, and significant activities, whereby new materials, concepts and projects are tested and reflected upon collectively.

Staal will talk about how places like Catalonia, the Basque Country, Kurdistan, Baluchistan, Azawad, West-Papua, and the Aboriginal Nations enter into an art practice. In this lecture-performance, Staal who is founder of New World Summit, an organization working with territories excluded from democracy, conjures the political history of art, while contemplating the artistic history of politics in connection with his recent commission to build a parliament for the autonomous Kurdish region of Rojava, (Northern Syria). Get your tickets for FIELD MEETING here. 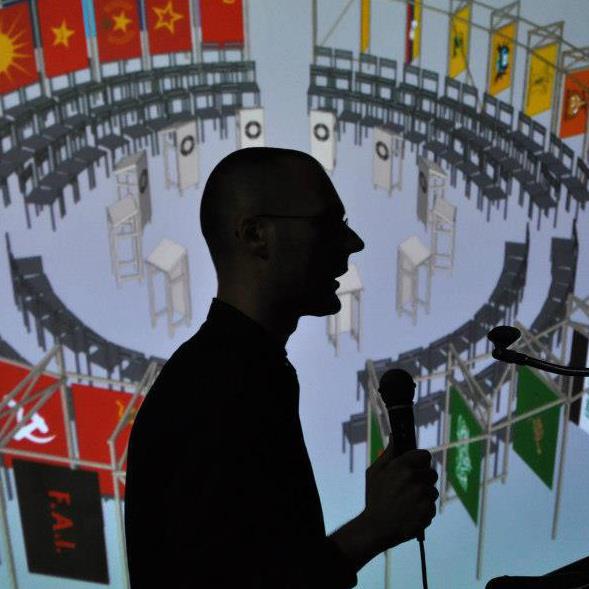 Jonas Staal founded the artistic and political organization New World Summit to create a space that encourages us to alter our perception of “democratic” governments across the globe. Since 2012, Staal has convened groups including the Kurdish Women’s Movement, the Basque Independence Movement, and the National Liberation Movement of Azawad to discuss designated terrorist lists and other methods of exclusion that systematically ban bodies from political order.

Staal is currently working on his PhD on art and propaganda in the 21st century. His most recent books include Nosso Lar Brasília (2014), which explores the relationship between Spiritualism and Modernism in Brazilian architecture, and The Art of Creating a State (with Moussa Ag Assarid, 2014), on the role of art and culture in the foundation of the new state of Azawad (northern Mali).