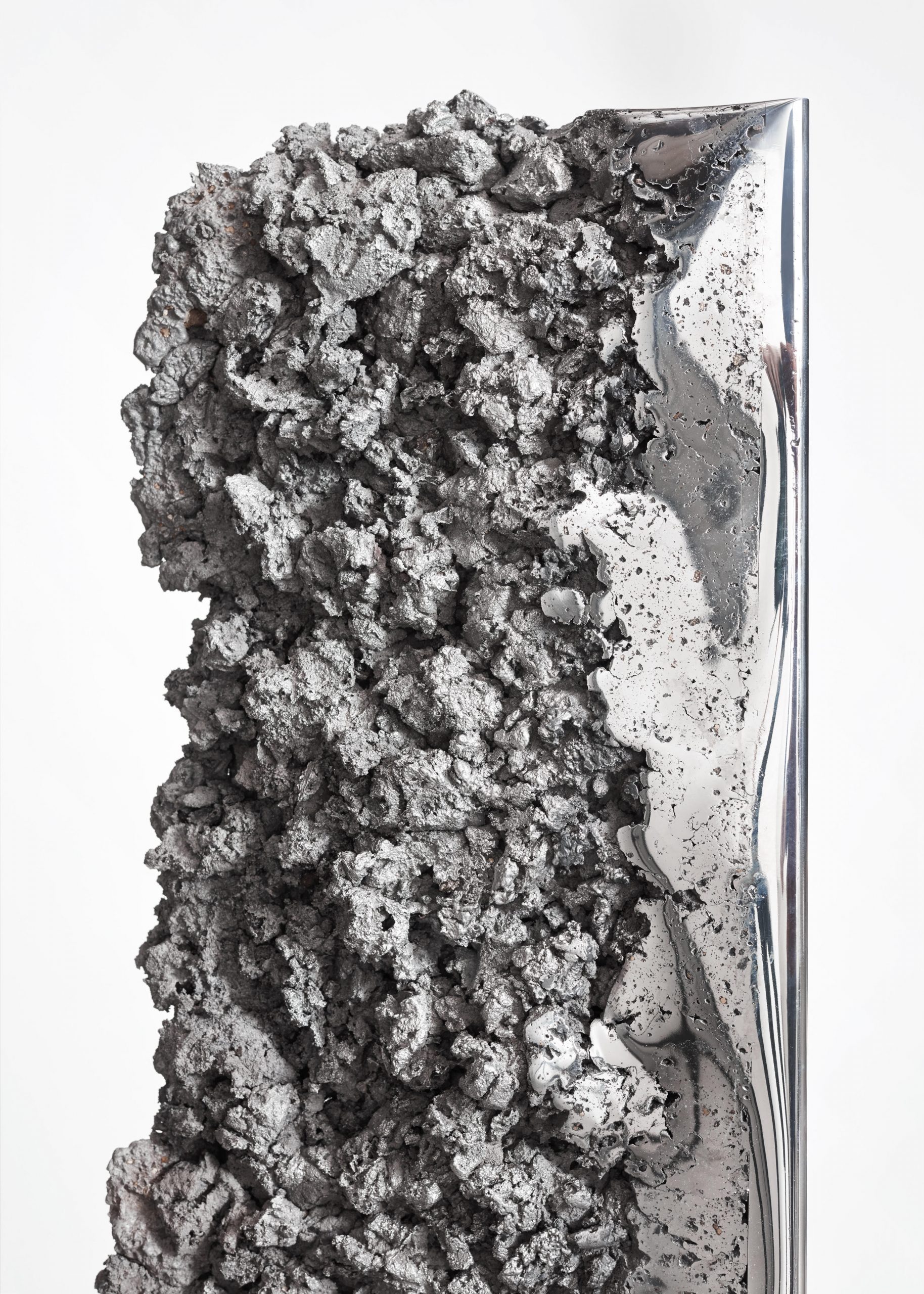 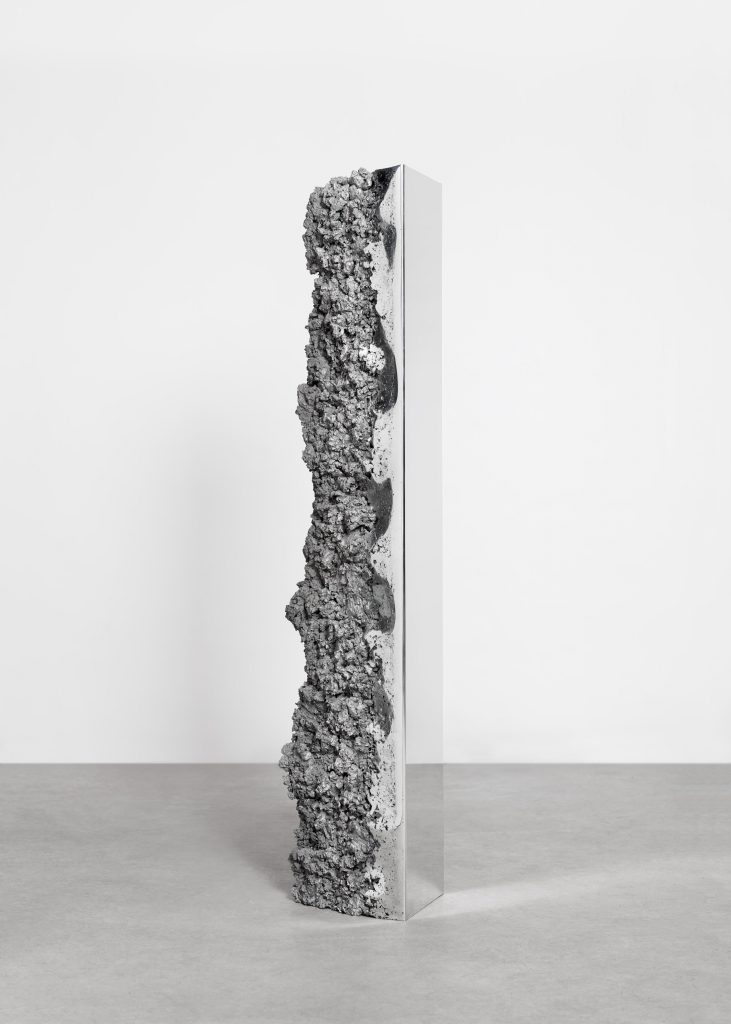 The boundaries of time and material are blurred and compressed in these series of monolithic objects. In each, rough-hewn forms fuse into sleek refined surfaces, as if expressing an evolutionary arc conveyed across a single object: from the rubble of a primitive deep history to a smoother and an imagined smoother, more elegant future context. These works made in either aluminum are the outcome of an experimental casting method that blends ancient techniques with modern technology. This allows the transformation of a material to be captured in a single work, a metamorphosis that blurs the organic and the machined until it is no longer clear what separates the natural from the artificial. 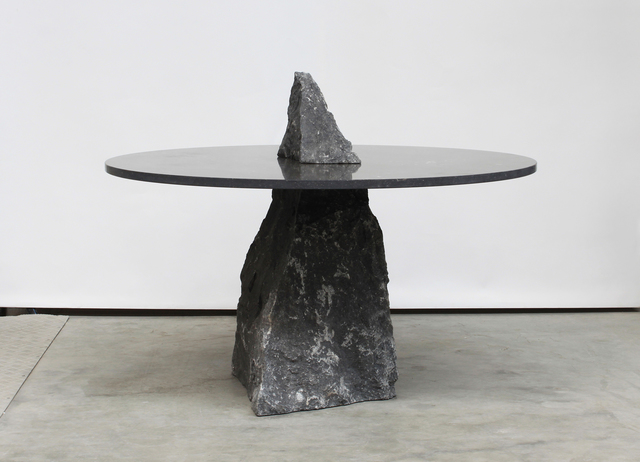 Nature and geometry are at the nexus of the Fragments collection. From one extreme, found looking rocks are intersected by polished planes. At the other extreme, completely finished stone is fragmented by different marbles and colors. Fragments was conceived at the quarry, where irregular and organically shaped boulders are being transformed into perfect industrial geometry. The initial interpretation of this juxtaposition between the original rock and the finished products, is in the group of work where rough found boulders are intersected with planes of perfectly finished and honed machine parts.

From this point more subtle variations in concept occur. This is the case for the cross base dining table and coffee table. The idea came from watching the process of turning raw blocks of stone into slabs to be used as surface. By utilizing the quality of the end slab, both an irregular surface and a polished plane appear. The irregular surface creates a texture that invisibly becomes a technical joint for the base, constructed from two regularly finished slabs, and cut from the same block.

Lex Pott is a Rotterdam-based designer who produces arresting experimental works that fuse natural inspiration with sleek, modern aesthetics. Incorporating both art and function, Pott creates one-of-a-kind pieces that celebrate the raw essence of a material, whether it is wood, metal or stone.

Born in 1985 to artistic parents, Lex Pott was immersed in creativity, production and innovation from a young age. After attending the Design Academy Eindhoven, he began his practice of connecting the principles of design with the use of raw materials – a groundbreaking combination. His graduation project, which included wooden shelves and an oversized stone table, utilized natural materials beginning a dialogue around sustainability and ecology.

Lex Pott ’s True Colors collection incorporated treated metals, panels, shelves, and vases that exposed the exuberance of uncorroded metal; his Diptych collection was a break into organic and geometric shapes; and his Pivot line of silver corner shelves and gold cone embellishment was a streamlined take on classic functionality. But it was the Pivot shelf that caught the eye of Hay, the Danish manufacturer, who picked up the collection in Milan in 2013, a move that catapulted Pott onto the world design stage. 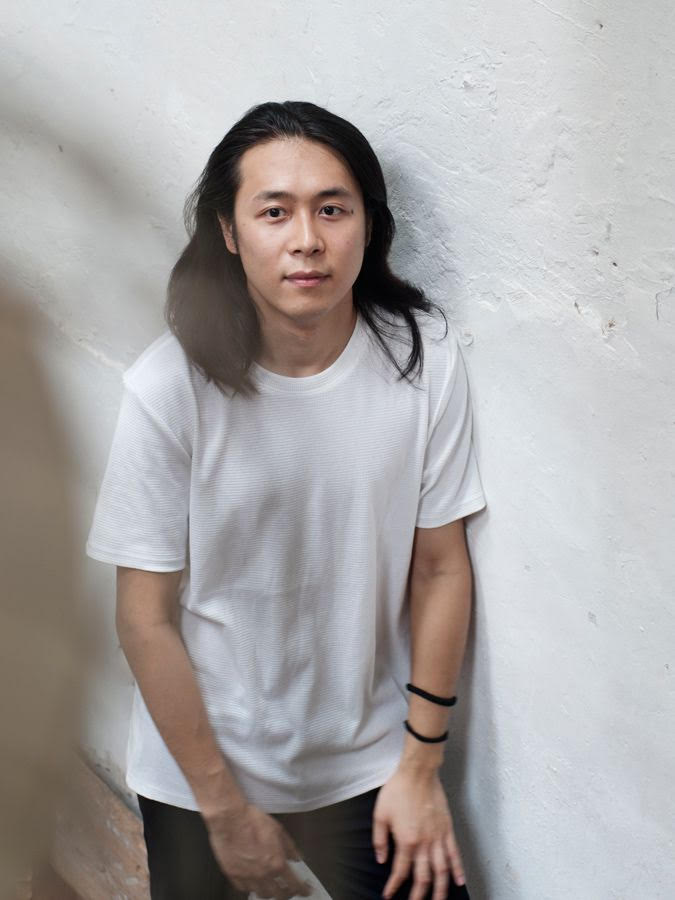 Hongjie Yang’s work is characterized by objects that exist in liminal states of being, capturing the ambiguity of multiple dualities within a single form. This approach is informed by an exploration of the analogies and interconnections between humankind, nature, and the cosmos, and by the premise of the universe constantly evolving as an implicit whole under the collective dynamics of explicitly opposed forces and processes. Yang studied in the USA and at Design Academy Eindhoven, the Netherlands, where he received a Master in Contextual Design in 2015. He is currently based in the Netherlands.

About the Future Perfect Gallery

The Future Perfect was born from a desire to create a showcase for exceptional decorative arts and design. In September of 2003, amidst a gathering of friends and enthusiasts, founder David Alhadeff opened the original store in Brooklyn with a party celebrating the burgeoning local design community. From those modest beginnings, The Future Perfect embarked on a path of steady growth and broadening horizons. Though still involved with the Brooklyn design scene, The Future Perfect has moved on from its Williamsburg roots, becoming a platform for design from around the world at its two locations in Manhattan and San Francisco.

They feature many unique and special edition objects and furnishings from a diverse group of distinguished designers. Some work is by established figures in the design world while other pieces are by emerging talents. Taken together, they present a rich and compelling tapestry of dazzling possibility.