Since last April, Dutch product designer Karlijn Sibbel has been conducting research at the world’s first communal bio hacking lab: Genspace in Brooklyn, NY. Newly graduated from the ArtEZ University of the Arts, Karlijn won the Design Stipendium 2015 at the Groote Sociëteit in Arnhem. This prize brought her to New York, where she currently explores the possibilities of bio-organisms to connect production methods to natural processes.

Merging existing boundaries between science and art, Karlijn not just designs her products, but, in a way, also her materials. When the young designer starts a new project, the final product is actually not even on her agenda. “For me, the product serves as a tool to communicate the material. When I finish a product, I want people to focus on the material’s possibilities. If I would say I am designing a chair during the process –something I am always truly hesitant about – people will start focusing only on the chair. And for me, it is not just about the chair, but the process in which it came to be. The product or application is there to offer a context to the material’s possibilities, and to say: look what it can do!”

For the final project of her program, Karlijn took her first steps into the world of algae. Here, she soon discovered the scale in which a whole branch was devoted to algae, and a fascination was born. “I just had to know more: why are people so concerned with such a tiny organism? What is so special about it?” At Wageningen University (WUR), Ward Blanken and Jeroen de Vree opened their lab to the designer. “I bet they didn’t know what to do with me; a girl from art school, suddenly showing up in their lab. I reckon that does not happen too often. Luckily, those borders are increasingly becoming more and more vague, but that doesn’t mean you don’t have to work through them. That’s actually the fun part!” 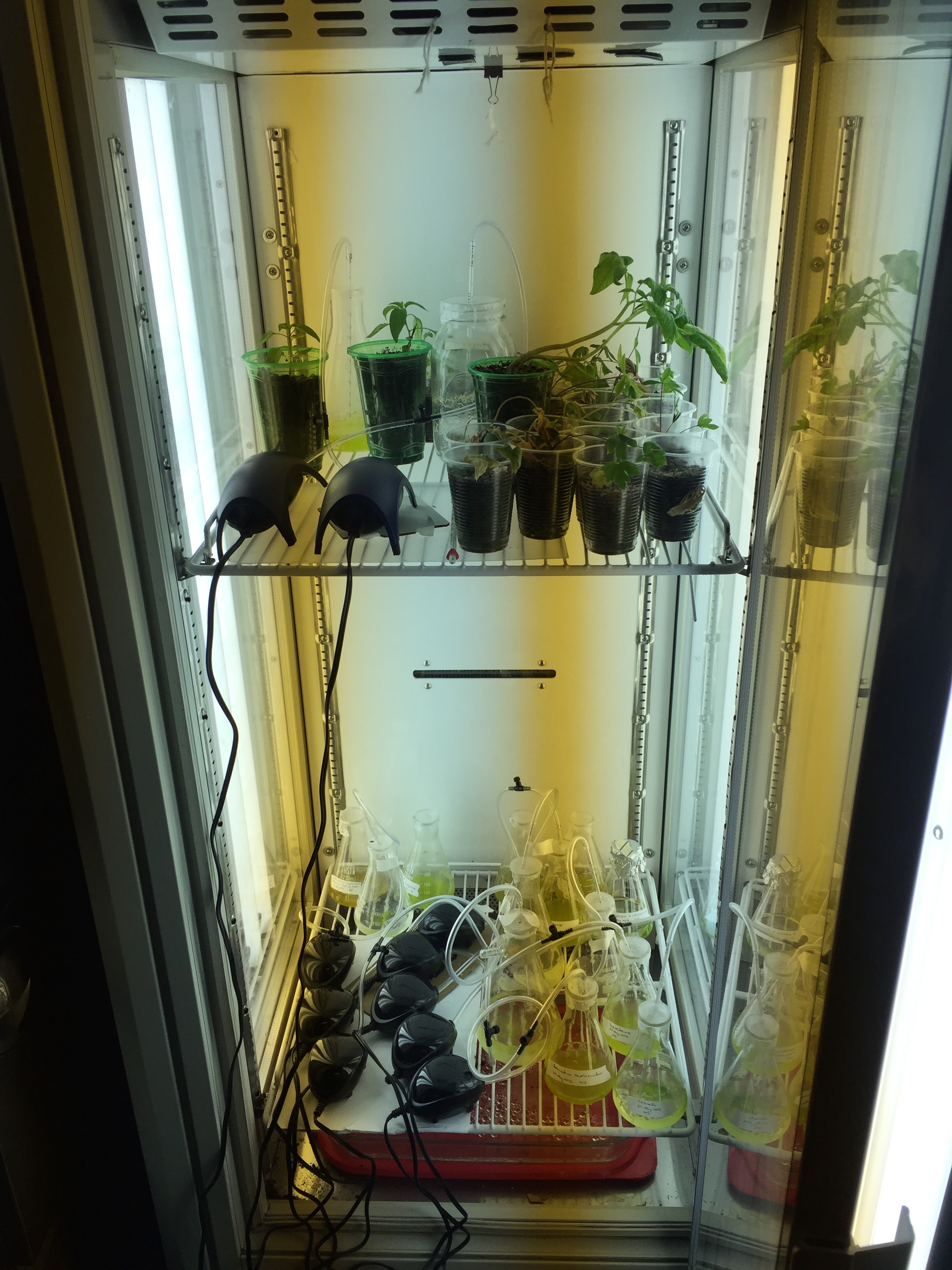 At WUR, Blanken and de Vree introduced Karlijn to their research on algae. At that time, Blanken was in the process of building a bioreactor, which is an engineered system that supports a biologically active environment wherein organisms can grow. “It was a flat disk, spinning slowly in the water, which is where the algae lives. While the disk was illuminated by light, the algae themselves were kept in the dark. Because they need the light to grow, the algae started to grow on the disk. I thought it was amazing they could manipulate the algae into sitting on the disk by navigating an external factor. By this, they could actually steer the physical shape of their growth.”

While the scientists primarily aimed to separate the organism from the water, Karlijn envisioned a whole new way of producing products. “For a designer like me, it was fascinating to see how this method created a ‘placard’ of algae. I then asked myself: can’t we make this disk three-dimensional?” Karlijn build her own bioreactor to grow algae in a 3D shape. “Instead of treating sheet material to create products, I started to think about manipulating biomaterials to grow into the right shape. Could I actually fit the growth of these materials and design in the same process?”

At Genspace, Karlijn continues this project by experimenting with the algae’s attribute to change color in relation to the water’s concentration of salt.  “When you look at salt pans, you see all these beautiful shades of green, red, and everything in between. The same goes for the pink lake, that owes its name to this green algae, that turns red.”

With no access to a lab, Karlijn mainly built her own instruments in the Netherlands. At Genspace, they offer more than just the right tools; they teach a basic knowledge that Karlijn previously lacked. “At my arrival, I felt slightly overwhelmed, as I did not know what most devices were for. But that actually went by very quickly. Working in a lab, is like working with formulas: if you are not into math and you see formulas, you panic. However, if someone explains them to you, you discover the knowledge is actually quite basic.”

From using an extreme pressure cooker (autoclave) to sterilizing her work, Karlijn has now gathered the tools to do more accurate experiments back home. However, making her own instruments will always be a part of her process. “Most of the time, I am aiming for different outcomes then the existing tools offer. What I do is very specific, so I am still inclined to alter conventional instruments into something new. However, most people at Genspace do this, as do scientists at academic institutions.” 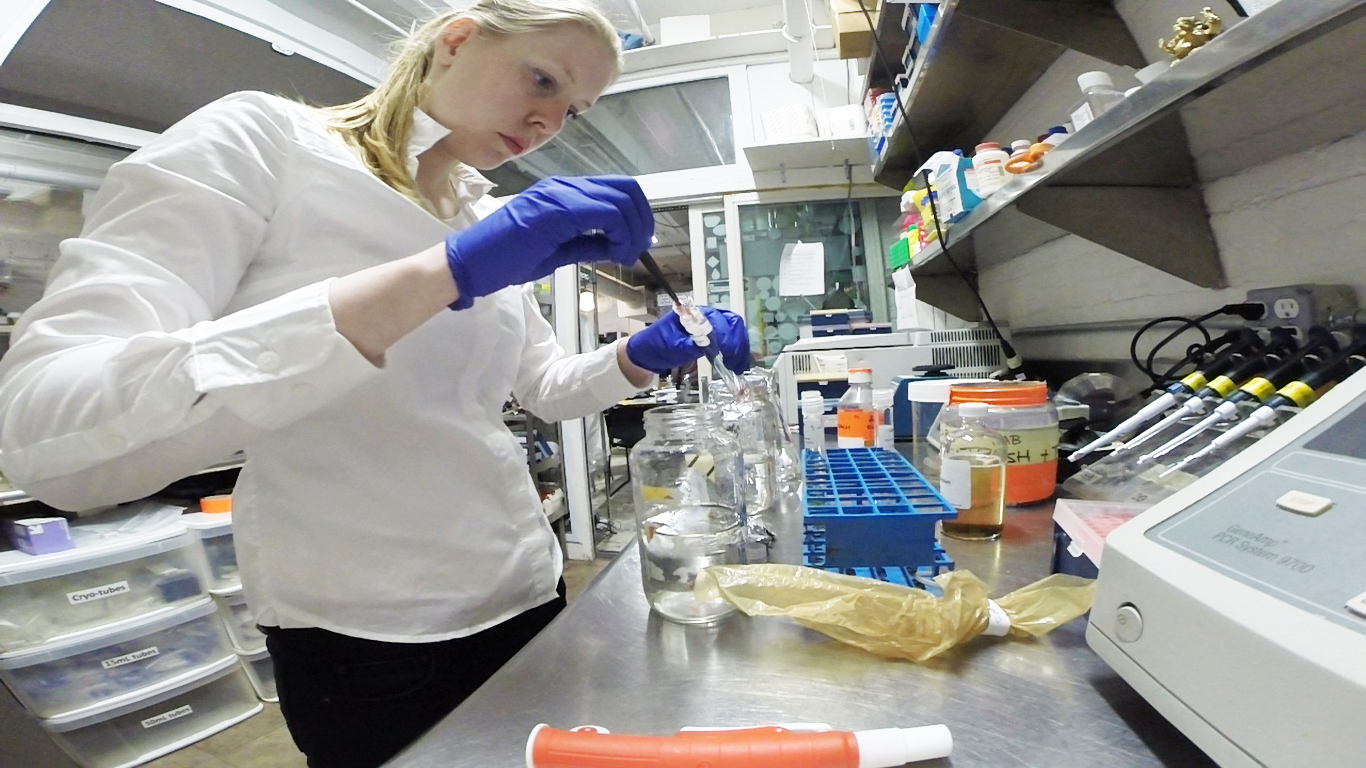 Besides algae, Karlijn is also working with kombucha, which is a fermented tea created by a symbiosis between bacteria and yeast. “It is kind of the new health craze – especially in New York. You cannot really see the culture, but when you feed the culture with green tea, sugar and vinegar, it converts the sugar into cellulose. This cultivates a leather-like layer, which floats on top of the tea. You could actually say it creates its own material.” Karlijn points out that New York based artists are already creating clothing from kombucha, which poses an interesting question: “What if we found a way to do it on a larger scale, and we would be able to grow our textiles? It would be an interesting alternative to working with woven textiles and chemicals.”

Right now, Karlijn is wondering if it is possible to ‘grow’ a pattern in the material. “Since I have heard that the thickness of the cellulose is related to the depth of the culture, I made beveled bottoms to see if I could create a steep layer. While I expected it to be the other way around, it actually became thicker on the shallow side of the culture. I have not yet figured out why, but at least it has an effect. One of my next steps will be to try and grow a more folded structure into the cellulose.”

It seems like anyone can start a project of genetic manipulation at Genspace, which is why it has attracted a lot of buzz. In result, the bio hacking community lab has built this exciting, almost futuristic reputation. However, Karlijn is quick to put our feet back on the ground: “It is only Bio Level Safety One,” she laughs. “We cannot work with viruses, or basically anything dangerous. Besides, Genspace has to approve your plans before you start your research. So, no: you cannot clone people here. With just the right amount of knowledge, these are experiments that could potentially be done at home, as Kickstarter companies are making more accessible instruments.”

But if you can also do it at home, what is the advantage of working at Genspace? Karlijn immediately points out the advantages of being part of a community. “For example, one of the other lab members is working on a project to increase the growth of bacterial cellulose, by using genetically modification techniques. There is a great overlap between our projects, so it is really interesting to discuss our work together. He is really smart, sharing all kinds of new knowledge and referring me to articles I should read, while I might be able to give a creative twist to his work with the results of my experiments. That is the most wonderful thing about this place: that you can complement and inspire each other.”

On that note, Karlijn believes the Dutch have a thing or two to learn from New Yorkers: “People are so open to new people and experiences – it is way easier to get in contact with the right people, and visit studios or companies. It is something I noticed on both a personal, and professional level: people are just not that difficult. They just go with whatever comes their way, which creates a more collaborative climate of endless possibilities.”

Karlijn Sibbel is a creative researcher and designer based in Arnhem, the Netherlands, with a background in beta and a creative education in Product Design. As a creative researcher and designer Karlijn is fascinated by the growing overlap and opportunities for collaboration between scientists and designers. As a designer, she is able to experiment freely and beyond the traditional methods of scientific research. This provides Karlijn with a fresh perspective and allows her to combine different approaches.

A curiosity towards materials lies at the heart of Karlijn’s work. It is this curiosity that inspires her to research the characteristics of a material and to discover how its features may be transformed and used to develop new materials and production processes. For the remainder of June, Karlijn will continue her research at Genspace before returning to the Netherlands to continue working on various projects.

Genspace is a nonprofit organization dedicated to promoting citizen science and access to biotechnology. In December 2010 Genspace opened the first-ever community biotechnology laboratory, a Biosafety Level One facility in Brooklyn, New York. Here, they offer hands-on courses to the public, provide extracurricular experiences for students, and encourage scientific entrepreneurship, particularly in the fields of molecular and synthetic biology. As a community-based lab, Genspace offers members the unique opportunity to work on their own projects and experience the joy and wonder of science firsthand.