We sat down with Linda van der Heijden and Wout Westen to reflect on Circus Family’s evolution over the last year, and to look forward to a future of blending and combining both artistic and commercial projects.

Just like last year, the Amsterdam-based design collective Circus Family presented their LED installation “Day & Night” at the NYCxDesign opening of WantedDesign Brooklyn in May. Their main objective? “To create content that moves people” – and no, not just figuratively. We sat down with Linda van der Heijden and Wout Westen to reflect on Circus Family’s evolution over the last year, and to look forward to a future of blending and combining both artistic and commercial projects.

Circus Family made its American debut in Texas, creating their first installation on US soil at South By Southwest in 2014. Moving forward, the collective met with Wanted Design, and came up with a proposal for NYCxDesign 2015. Linda speaks of an instant connection, that resulted in “an open dialogue of ideas. It all happened very organically – we did not really have to pitch our story. They said: this is the location, where would you like to do it?”

Last year, their installation in Brooklyn’s Industry City was connected to a DJ, and located above the stairs. This year, their project was set up in the length of the space, closer to the ground, and more interactive with its visitors. Linda emphasizes the importance of being innovative, and showing how the collective has grown the second time around. “You don’t want to do a similar thing twice, because people would come to see it as our standard trick, and think: ‘oh, it’s those guys again.’’

Industry City is characterized by its raw, industrial spaces: long pillars, long vista’s, and high ceilings. “First, we drew the installation in the center of the space – blocking the rest of the event,” Wout laughs. “Obviously, we had to move it a little bit, but otherwise we were granted complete creative freedom. That might seem like a basic starting point, but that doesn’t change the fact it’s a good thing to have. This year we had the tools and the technical savvy, but also the right atmosphere to make it bigger, and better. It’s a completely different design.” 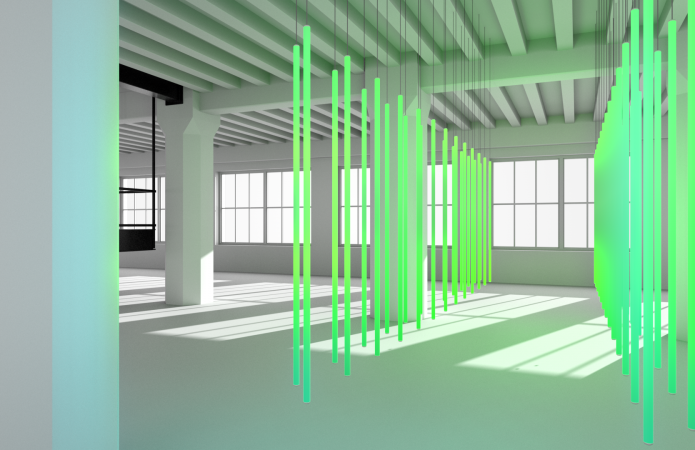 The collective loves old-fashioned strip lights. “Mainly the feeling of them,” Wout explains. “These days you can create them with modern techniques, and we updated it to LED so we would be in complete control. We started to experiment, and decided to use geometric shapes as they perfectly fit into this long, industrial space. In the end, we created a tunnel of long, straight tubes that seemingly float in the air. We decided to leave the space alone, which felt like the right thing to do when we reviewed the sketches, and even better when we arrived in Brooklyn.”

Last year’s installation was purely there for the party, but Linda feels that this year’s project was more ambiguous. “It’s already in the name: ‘Day & Night.’ The beautiful thing about LED light is that it’s just as visible during the day, so it could be a part of the day-time exhibition, as well as the party at night.” Wout adds: “The LED changes its character during the day. While the light was very serene and clean at first, its intensity increased at night, creating a warm, colorful glow.”

In contrast to last year, the audience was invited to connect to the installation, and walk through ‘the tunnel’ of LED light. Wout: “We installed the depth cameras, which tracked all movement. Because the camera followed each person that walked through the installation, people triggered the sounds and colors of the tubes themselves. When multiple people were present, the computer automatically created a musical scale of different sounds.” However, Circus Family wanted the installation to be organically interactive. “We wanted to invite people to explore the installation, without them realizing it. There is no need to jump around or wave your arms, we just want people to be like: ‘hey, it looks like I am triggering something. Let’s figure out why.”

The ambiguity of “Day & Night” is in line with Circus Family’s evolution over the years. According to Wout, they are aiming to create more room for personal, artistic projects besides their regular work. “Coming from our commercial background, we have done the light support for many DJs, acts and musicians. We have mastered those techniques and know how ‘the night’ works, so the main challenge is to create more of our own work. With this installation we also invested in ‘the day,’ looking for that contrast to create two completely different visual sensations. If you think about it, it is kind of symbolic of this dynamic direction in which Circus Family is heading.” 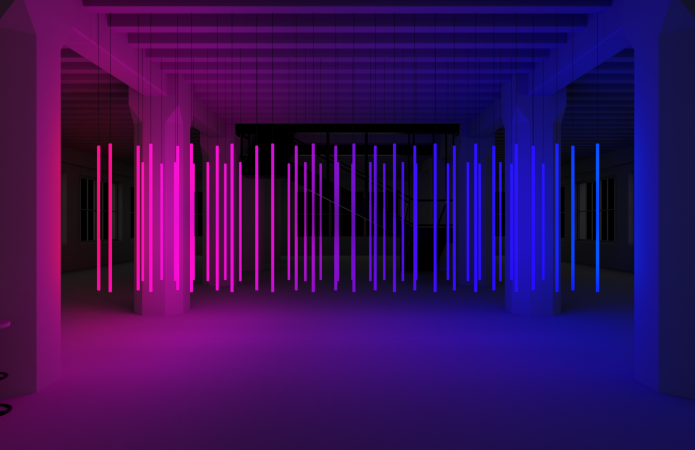 However, Linda insists that their strength is in the combination of both worlds. “You learn a great deal during commercial assignments, but, because there is always someone in between, you are also limited in your own creativity and ideas.” Wout adds: “And of course that is how it’s supposed to be, but the fun thing about artistic work is that you can put your own soul and vision into it, which also inspires and improves your commercial projects. That interaction is probably our most interesting challenge.”

“It’s not just to improve ourselves visually, but also technically. We put a lot more time into this installation to write our own software, and improve our set of skills’’, Linda explains. “By making that investment in ourselves, we are now able to do things we couldn’t have done last year.”

Usually Circus Family consists of 6 to 7 individuals, but Wout – originally a journalist himself – explains that their team’s composition is very diverse and flexible. “We are always trying to create a balance between people from different backgrounds, that master a broad range of techniques. Our designers are not defined by a single ability; we believe in the strength of diversity, and occasionally try out positions that we don’t have. Sometimes people only stay here for a 3 to 6 months, or occupy one of the flexible workspaces in our office. It keeps us receptive, and open to new things.”

In order to develop ‘Day & Night,’ Circus Family attracted new people with the right knowledge and skills to join their team. “ We had all this technology, but we could not connect it to each other yet. We were like: if we want to do this, we need that kind of knowledge, and how does this connect to what we are already doing commercially?” However, Linda adds that the people at the core of the collective remain the same. “They are your brand, the face of Circus Family – you don’t want to change that.”

Linda refers to ‘Day & Night’ as the “the perfect project for us to grow, and get to the place we are now.” Last year they would have used animation to create movements of color and sound, while this year they used the audience to trigger that movement instead. “This entirely changes the game behind the scenes, although we also still connect the installation to the DJ at night. It is a continuous process of trying out, combining, and improving techniques, and we always make sure there are projects on the calendar that leave room for experimentation. For example, when we create visuals for an EDM act like Yellow Claw, we also like to try out new things and create something different every time. We want to keep that excitement.”

Circus Family is a family of audiovisual designers with a passion for bringing high-end 2D projects to life, using design, moving image, music and interactive technology. They specialise in the fields of fashion, music, sports, and luxury. As well as commissioned work, for brands such as Nike and Tommy Hilfiger, and events including SXSW and New York Design Week, Circus Family loves to create their own projects – just for the fun of it.