Dutch archivist Helene van Rossum has found a unique collection of documents in the archival holdings of Rutgers University in New Jersey. The collection consists of letters that were signed by famous Dutch naval commanders and statesmen from the 17th century. In response to her discovery, I got in touch with Helene. As a new Junior Cultural Officer at the Consulate General of the Netherlands in New York, I was curious how these Dutch letters would end up in an archive in New Jersey. I also wanted to find out what these documents would mean for the Dutch history.

On Friday, March 17th, I called Helene to ask her several questions. She was happy to share her story with me and the readers of Dutch Culture USA. 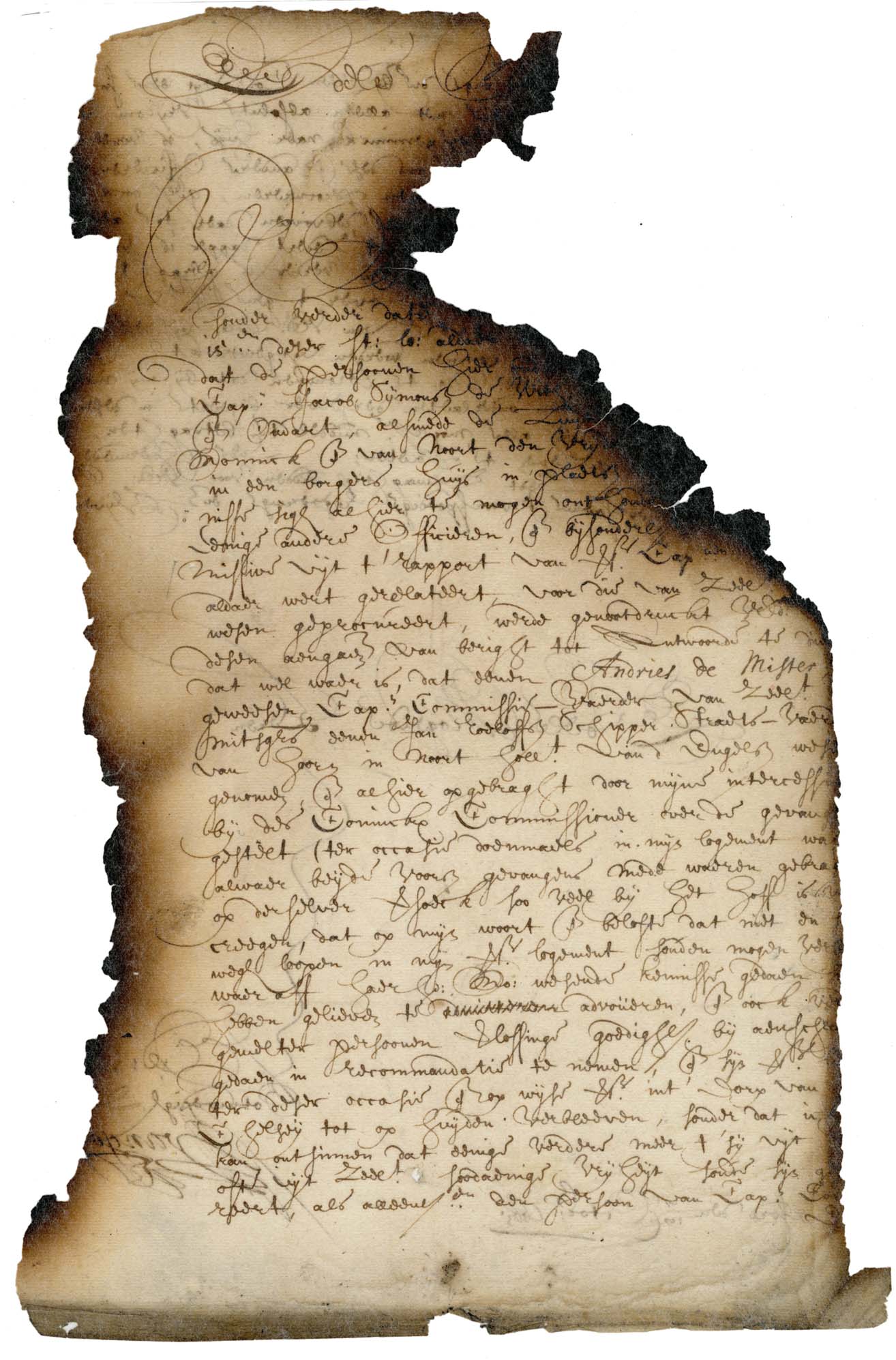 How did you end up working in the United States?

“I studied History at the University of Amsterdam. I already decided that I wanted to become an archivist during my studies because I enjoyed working with historical documents across the centuries, covering a wide variety of topics. When my partner, who specialized in musicology of the Middle Ages and the Renaissance, got a research fellowship in Oxford, England, I decided to do an archival training in London. When my partner subsequently got a job at the Music Department at Princeton University, I continued working as an archivist in the United States, first at the Seeley G. Mudd Manuscript Library in Princeton, then at the Curtis Institute of Music in Philadelphia. Last summer I started working at the Department of Special Collections and University Archives at Rutgers University in New Brunswick. It is here that I found these unique documents.”

How did you get a hold of these documents?

“Rutgers Special Collections and University Archives has an unusual amount of Dutch materials among its collections. This is because of the close connection between Queen’s College (renamed Rutgers College in 1825) and the Dutch Reformed Church. Most of the documents relate to 18th century Dutch Reformed communities in New Jersey and New York. Thus, the staff of Rutgers University was delighted that I could read Dutch and dig into their Dutch materials, although nobody expected anything this spectacular. Me, too, thought I would only find material concerning Dutch reformed communities. Among the materials that did not have a finding aid yet were the papers John Romeyn Brodhead, an American historical scholar. The brief summary of the papers merely said ’17th-century Dutch documents collected by J.R.B.'”

Why are you so excited about Brodhead’s papers?

“Brodhead had visited European archives to collect transcriptions of documents concerning the early history of New York. If people came across the reference to the Dutch documents in the past they may have assumed they were copied from the archives in The Hague. But when I opened the folders, I immediately saw that these were authentic Dutch documents. “I couldn’t read the first two letters due to the different handwriting in the 17th century. Yet, with the third document, I recognized the signature right away. I could not believe my eyes: it was Michiel de Ruyter,” she said joyfully. Michiel de Ruyter, about whom the Dutch film “Admiral” was made in 2015, is one of the most famous admirals in Dutch history. Brodhead’s collection consisted altogether of 25 documents which were signed by famous Dutch people of that period.” 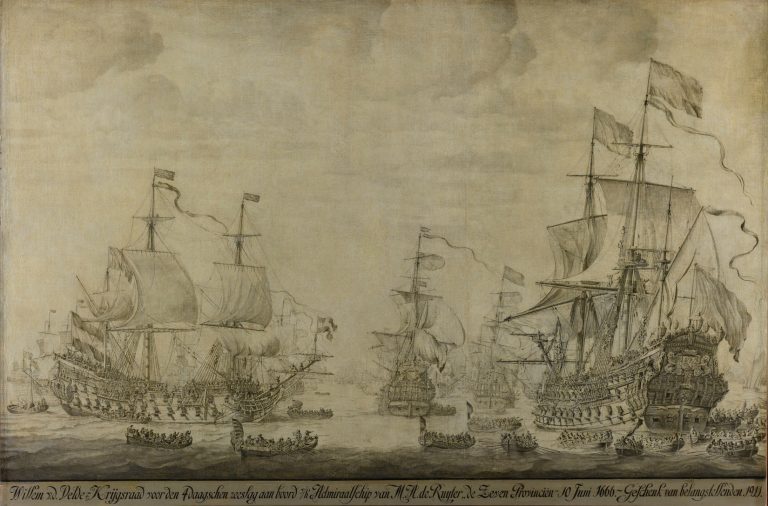 “It had been quite some time that I had read Dutch 17th century handwriting as a student, so I did not immediately understand what it was about. I recognized the name “Pleymuyden” in the document, but couldn’t understand the meaning of the name. When I started reading up about Michiel de Ruyter, I soon found out that Pleymuyden referred to the “Battle of Plymouth” in 1652, and that the document was written two days after the battle. It was actually not a letter but a resolution by De Ruyter and his war council to go after the English fleet again while they were not expecting it because they were still repairing their ships in the Plymouth harbour.”

But, how can a Dutch letter, written by a Dutch admiral from the Golden Age, end up here?

“When I found out that the third letter was from Michiel de Ruyter, I wanted to know who wrote the other 24 documents. I asked Jaap Jacobs , a visiting historian, for help, since he is specialized in 17th century Dutch and colonial history. Jaap instantly recognized a few other signatures, including two letters signed by Johan van Oldenbarnevelt, a famous Dutch statesman. Jaap could also explain why the majority of these documents had stains and burn marks, and why they all related to naval matters. As Jaap told me, the archive of the admiralties, including these letters, were kept at the Ministry of the Navy in The Hague. On January, the 8th in 1844 a candle started a fire in the Ministry’s building. To save the archives from burning the people in the building threw them out of the window. Many of the papers got lost, because the wind spread them over the city of The Hague, which was covered in snow. At that time, people were fond of collecting autographs, so they ended up in the hands of collectors, including John Romeyn Brodhead, who was visiting European archives at the time.”

So, what does it mean to you personally that you found these documents?

“Archival documents always give you a direct window into a certain time and enable you to look over the shoulder of somebody who wrote a document. The resolution of Michiel de Ruyter shows you that it was not just him merely giving orders. The decision was the result of a discussion, important enough to put on paper. The other documents also very much show you what life was like aboard the ships that during the various wars that were going on in the 17th century. It makes history come alive. Of course, it is also a great story why these documents are scorched and ended up at Rutgers. The fire was so newsworthy in 1844 that a whole pamphlet was written about the event, with foldout images of the building before, during, and after the fire.”

What is the impact on Dutch cultural heritage?

“The documents do not change the big picture of history. But to write history you depend on available sources, and new sources always add new pieces to the puzzle, which is never complete. It is also phenomenal that these documents are found in such an unexpected place. Perhaps this could lead to more heritage related documents.”

Concluding that for an archivist as Helene this treasure is what her work makes it interesting and exciting. You never know what you will encounter while doing your job. Being an archivist is not just going through old stuff, as some may think, but it is also, as Helene proves, an exciting job!