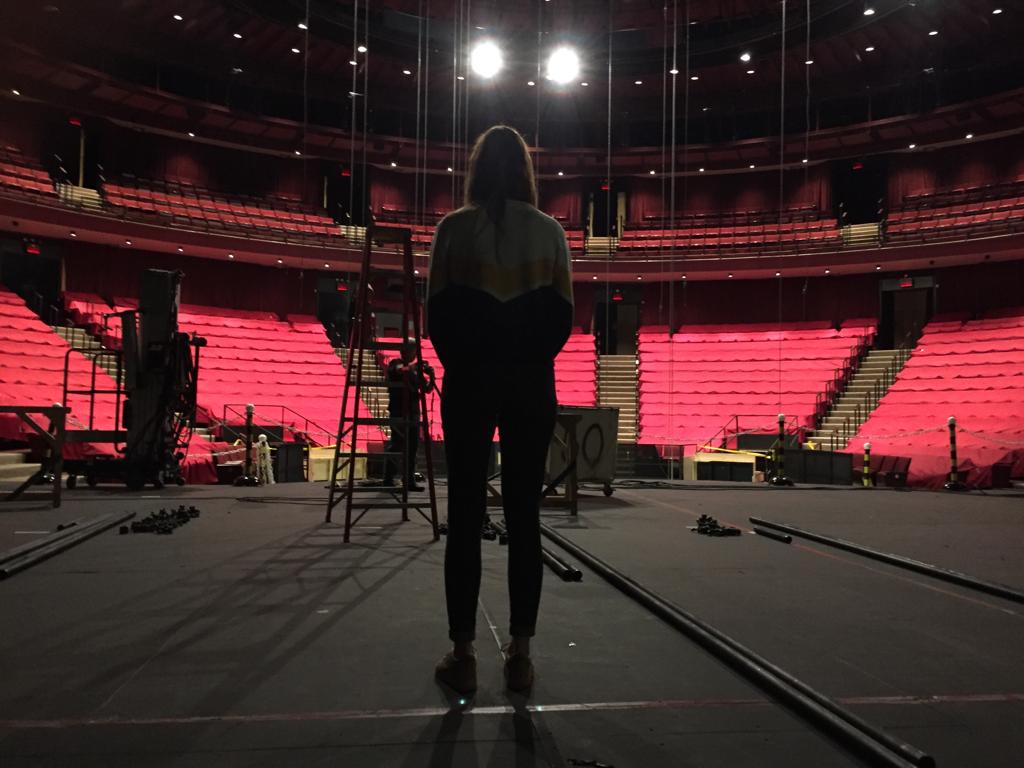 Every year, the Lincoln Center Theatre organizes its LCT Directors Lab, a developmental program for nurturing stage directors from around the country and around the world. Every year, the prestigious program accepts around 70 directors who participate in a series of workshop, shared sessions, rehearsals, investigations, and discussions. One of the participants this year is Dutch director Merel van Huisstede.

Merel van Huisstede (1988) has always been interested in the practice as well as the theory of theatre-making. She received a BA in Theatre Studies and MA Dramaturgy at the University of Amsterdam. You can find more information about her projects on her site. 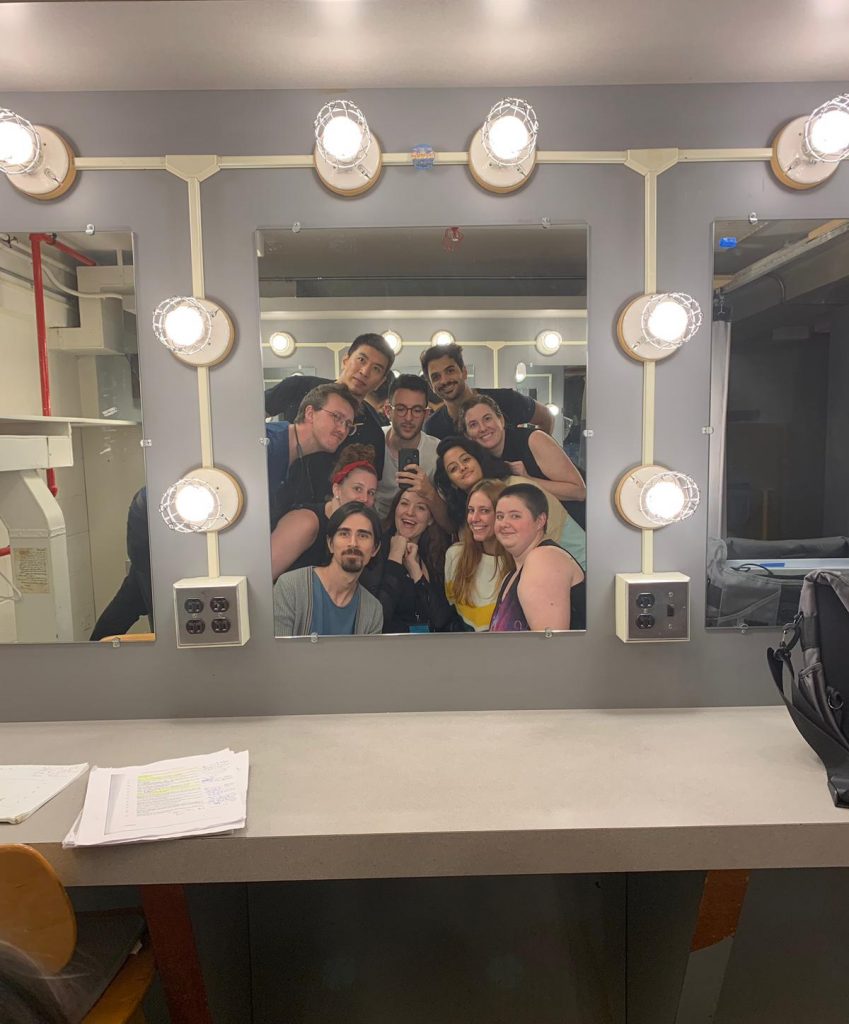 What were your previous experiences as a director?

I created my first play in 2011 for which I got the idea during the Amsterdam Fringe Festival. I thought: what this director does – that is what I want to do: to have your own view of a play and realize it through various artistic means; for me, that felt like the ultimate artistry. I worked with writer Rinske Bouwman (1988) for that first performance and we created Rauw (2011, de Brakke Grond, Amsterdam). It was about a man who tries to reproduce his actions every day. He ultimately hopes to be able to control his thoughts with this, something in which he naturally fails. However, it doesn’t matter: that failure gives him a human character. He becomes an anti-hero, something the public can identify with the most. My teachers were enthusiastic about Rauw and they let me make my own show as a graduation project. Therefore, I created Niemand in het bijzonder (2011) by Enne Koens. After this project I knew for sure: this is what I want to do.

In 2015, Rinske and I founded TG Tiefschnee. So far we have created and produced five shows. The sixth, Vantablack, will premiere in Utrecht in February 2020. It is a comforting horror show about the first designer baby and his creator. In addition to performances for Tiefschnee, I directed, among other things, the youth performance De Broers, and I worked for The Lunatics on Oerol. During my studies, I had an internship with Toneelgroep Amsterdam, NTGent and Wunderbaum. I worked for Wunderbaum and Stichting Nieuwe Helden. For Corrosia I led De Theaterkijkclub for two years, for which I gave lectures on theater. In addition, I worked with various directors.

One of my colleagues participated in the Directors Lab, which has made me so excited that I decided to submit an application. I was overjoyed when I heard that I was admitted.

Can you tell something about your activities at the Director’s Lab?

The Directors Lab is an intensive three-week program. In the first week,  you dig into the theme and you get to know each other. This year’s theme is Collaboration. How do you work together in a performance process? Are there specific rules in a rehearsal room, or not? As a director, are you “the boss” or not? What role does an actor or designer play in the process?

You are immediately thrown in at the deep end. We got the order to make a short show with someone else about someone you have lost: “You have less than an hour. Success.” I’ve learned a lot. Then we started with two texts: Godblog by Jeanette Winterson and Six Characters Looking for an Author by Luigi Pirandello. We worked on the texts in groups, consisting of seven directors, two actors, a designer, and an assistant stage manager. We dealt with the first text in a short process, ending with a presentation of thirty minutes. For the second and longer text, each group gave a one-hour presentation. The last week consisted of Shared Sessions: we shared our knowledge and expertise in short sessions for which you could register. In addition, special guests came to speak during the weeks: Bartlett Sher, Ann Roth, Ben Krywosz, Lileana Blain-Cruz, Rubén Polenko, and Ayad Akahter and Anne Cattaneo, Andre Bishop and Adam Siegel of the Lincoln Center Theater shared their insights. 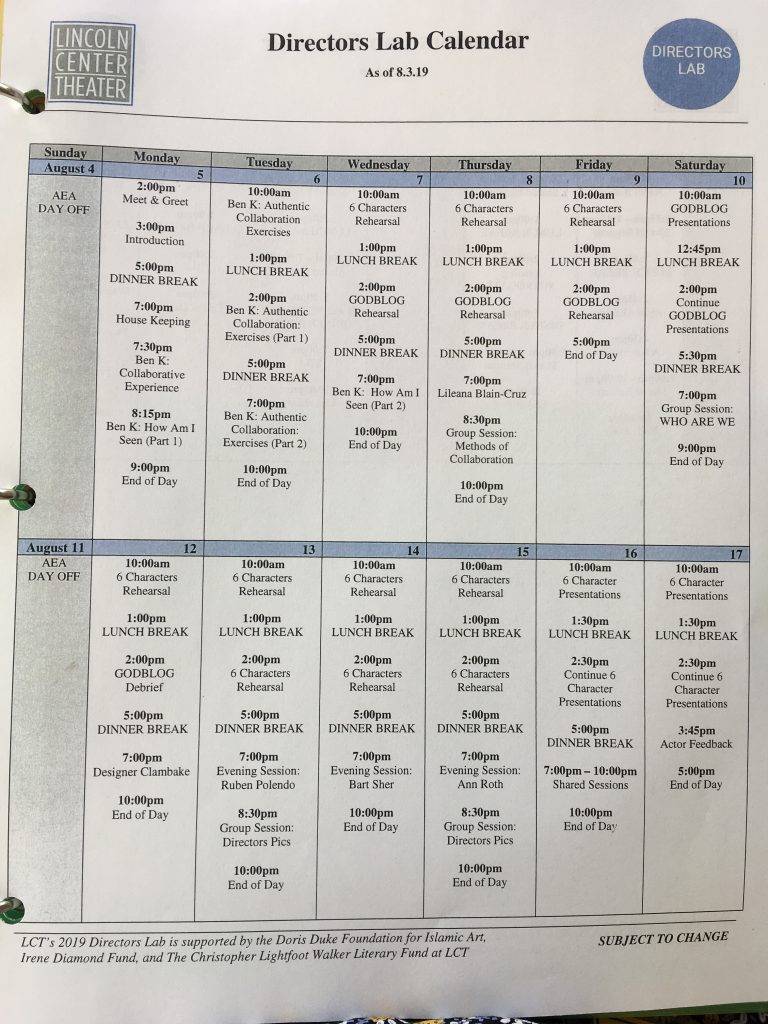 How did the application go?

In January the registration form was posted on the Lincoln Center Theater website. In March it must have arrived by post at the LCT. On the form you describe a special theatrical experience, you explain three projects that you want to realize in the future and you answer specific questions about the theme. It is important that you work as a professional director and that you can show who you are as a director.

What do you consider the highlight of this experience?

The highlight for me is two-fold. First, having the time to work on theater projects with like-minded people from all over the world, in such an energetic city, is a huge privilege and inspiring. This realization reached its peak at the beginning of the second week when you are slowly getting used to it, you know your way around, and you know that you have almost two weeks to go. Amazing.

Secondly, the network that I have built. As I said: almost no one has the same artistic and cultural background, but you still share so much with each other through your joint ambition. It is a motivating idea that I now have a diverse, global network with like-minded people. 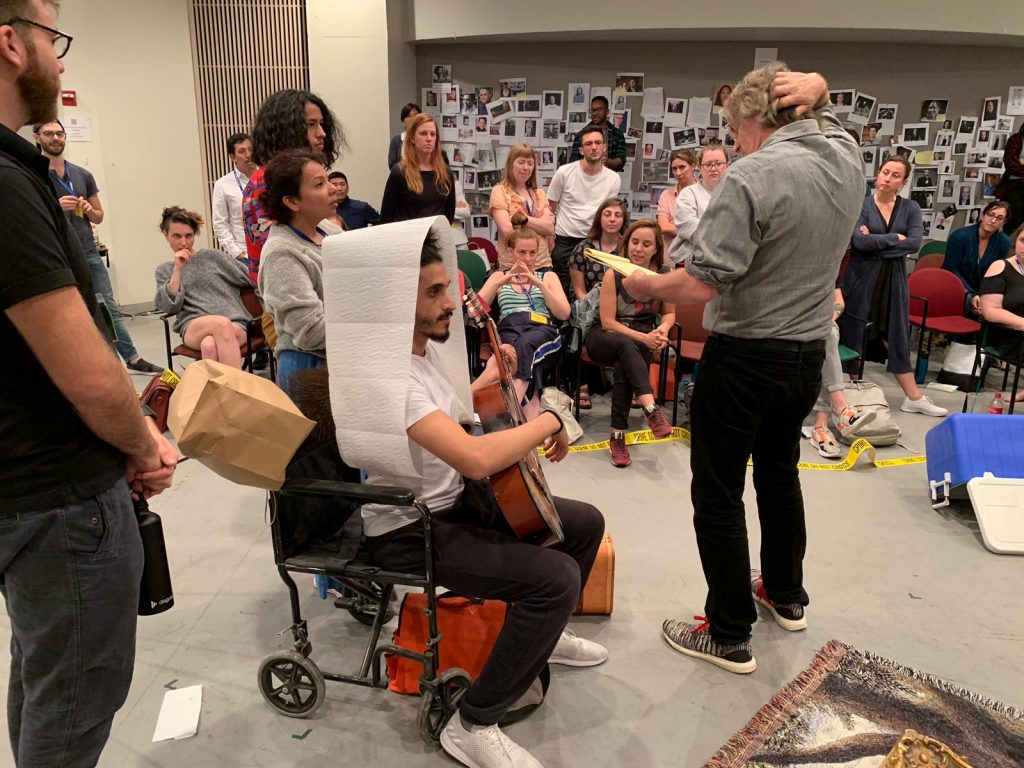 What do you take home from the Director’s Lab?

I learned a lot about the American theater system. It is interesting to compare it with the Netherlands. I have also become aware of the collaboration techniques that I already apply and that can still be applied in my own rehearsal process. I have gained more insight into the role that an actor, designer or technician can play in a process and I received a lot of specific knowledge about directing. For example, I learned about the Medusa strategy of Slobodan Unkovski, the abstract theater of Tadeusz Kantor, queer theater, the role of the writer, the editing of texts, the scream of Artaud, and oh, so much more.

What are your plans for the future?

I want to continue directing shows for TG Tiefschnee. As a freelance director, I want to tackle projects and I want to collaborate with directors who are more advanced in their career. I think I can learn a lot from that.

What are your tips for beginning, ambitious directors?

Formulate what you want to make as a director. By that I mean: think about what kind of theater you want to create, why now, and what you want to talk about in your performances. Making theater just to make theater is not enough, I believe. A director with a specific voice says much more. 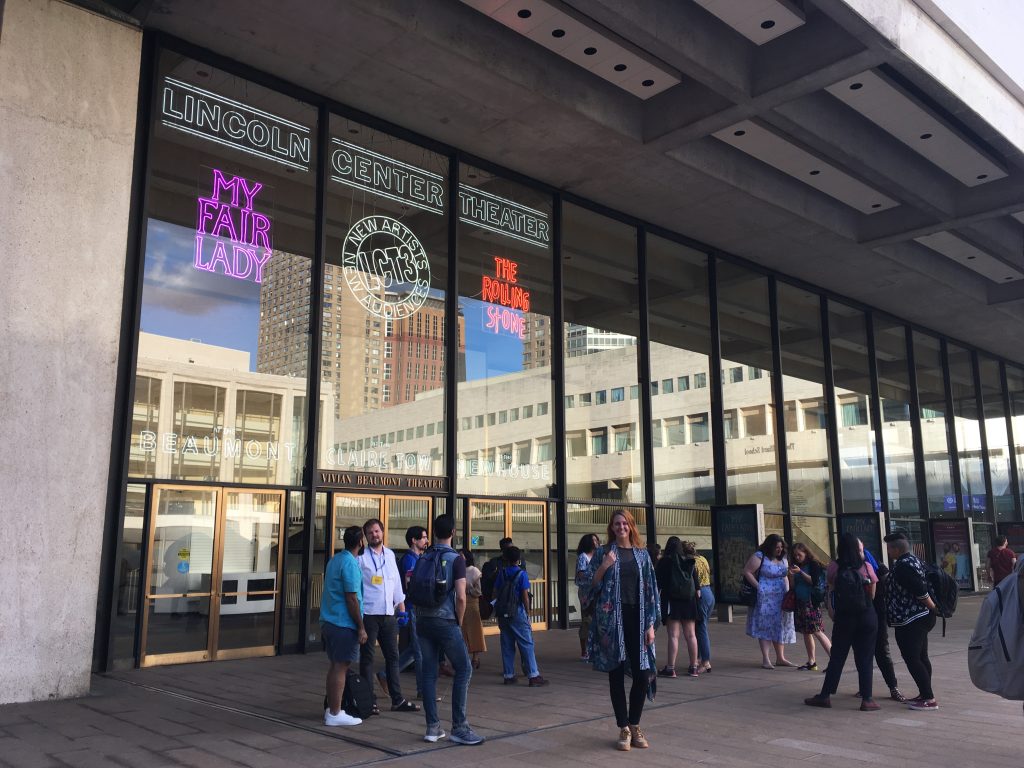