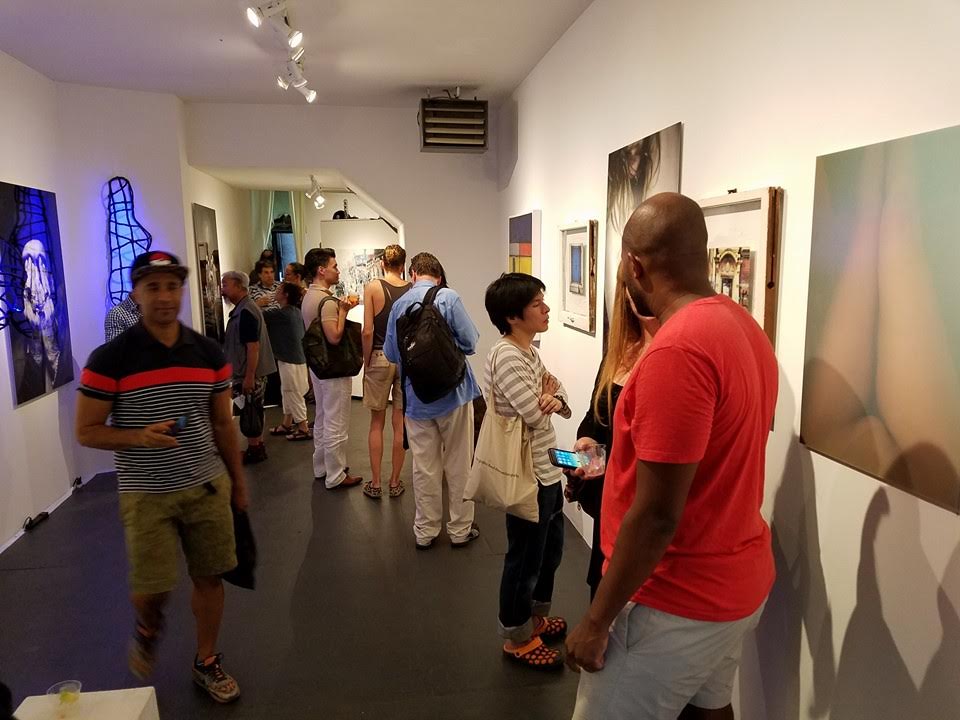 Zjef van Bezouw, an established name in the Dutch art world, who came to New York for business and to seek opportunities, is the gallery owner of OneMoreGallery. As his exhibition LINKED started this week, which he organizes together with Patrick Cupid, it’s the perfect time to look back on the artistic road he has traveled so far. Zjef started off as an artist himself in the Netherlands, where he had established his own name and professional business network since 1992. After coming to The States in 2011, being granted a green card as an artist, he considered himself not only an artist, but also someone who could provide a platform for other artists, as a mentor, especially for young talented contemporary emerging artists who could benefit from this.

So he started a collaboration with Jenna Weber, a young art professional which he had met on Craigslist, and who had her own gallery in Red Hook, named Gallery Brooklyn. They instantly connected and started working together for two successful years. Eventually they were pushed out the space, as the rental lease came to an end. But also the lack of art buyers in Brooklyn and Manhattanites not willing to make the trip to Red Hook on a regular base. Even though their fan base was huge and they had stabilized a good name for themselves, sales weren’t sufficient enough, so moving the gallery to the art buyers/collectors in Manhattan was the only option to maintain a sustainable business in art.

After a long search for the right location in Manhattan, which doesn’t come that easily as all New Yorkers might know, he found out that the penthouse level Rooftop Lounge in his own building in the charming NoMad area was available for small size events. His cousin Claudette van de Rakt, a Dutch photographer, became his first artist for his “OMG Pop-Up Art Events” that he organized there; a pop up due to the fact that these Art Events only last for one day. 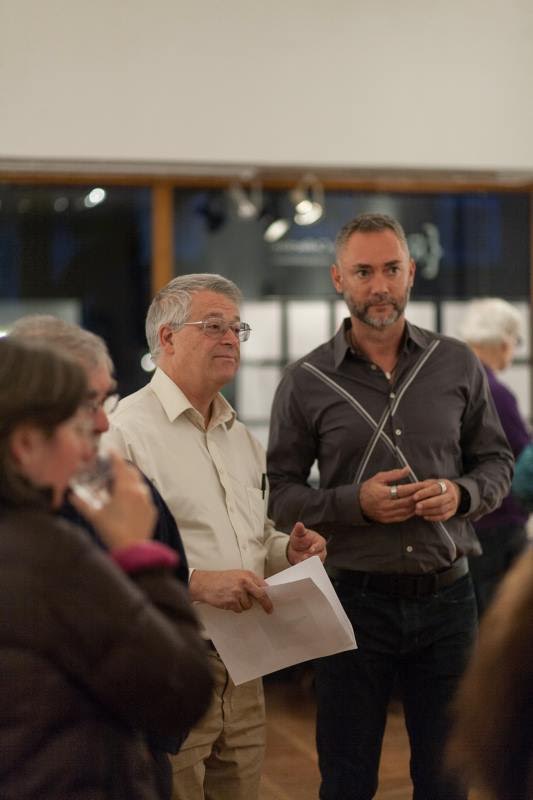 The OneMoreGallery Pop Art Events became a venue, where buying art “right on the spot” is the way to go. But buying art at Zjef’s event comes with an extra responsibility: ‘I think it’s really important to make everyone feel welcome and comfortable at my event. To share a passion for art, drink a glass and when the art is bought, I often even come to the customer’s home to hang the art with them. Together with champagne and some invited friends, we turn it into a celebration. That connection, and that way of sharing, that is what makes art and life beautiful in my opinion. It’s not just about selling a painting; it’s about building a relationship, a friendship.’

Due to these monthly exhibitions Zjef was able to grow his client base bit by bit, which was also supported by his work as an event designer, for companies like Estée Lauder and MAC Cosmetics. When Zjef was setting up his business here in New York, he had to close down his atelier in Amsterdam, which he still managed overseas at that point. ‘When that happened, it really felt like I was burning down my bridges. I couldn’t go back anymore. And it really took some time to adjust here in New York, which was pretty though in the beginning. Not only the people and the way of communicating is different, but also the production of art. Space is limited, and in general the houses aren’t that big as in the Netherlands. Normally I like to make big installations, but I had to change the whole process to make it suitable for New York habitats. That was pretty hard, because it was not my instinctive way of creating. But now, business is doing better and step by step I managed to build my life over here, and it feels good and satisfying.’

On the question why he organizes events, he answers very promptly: ‘I just like to see people happy. I’m not focused on how much money I could make with selling a painting, but I just really enjoy bringing people together. And of course you need to sell to keeps things going, but If I wanted to get really rich of it, I’d have to start doing something else, smile.’ Together with Patrick Cupid he organizes the LINKED Art Week exhibition, which started this week and will showcase eight different artists from around the world. It’s the first time they are working together, but when Zjef and Patrick met at the PULSE art show in Chelsea, they noticed an almost instant connection on how to bring artists and their art to art lovers and buyers. This was a perfect base for a collaboration. ‘When we first started talking we came to the conclusion that we have a similar background in fashion, and share the same vision in art and design. We share the same passion and are both very open and enthusiastic to create something together, reflecting off each other. For me it’s major to share that same vision and passion towards art, you don’t find that very often with people.’

Both Zjef as well as Patrick are drawn to the aspect of bringing people together, which was the first idea when they started thinking about what kind of Art and Artists they wanted to do together. Finding a space was the trigger for the event to start. ‘We found a space in the Lower East Side at Gallery128, and we shared our ideas with the gallery owner. When we visited she instantly called us ‘Black and White’, because from a physical aspect, we are of course a black and a white man. So she gave us inspiration for our event in an unexpected way. The name LINKED felt right, since we wanted to work with bringing people together. And literally everything since that moment has sort of fallen into place. All of a sudden everything made sense.’

Providing a platform for artists, that is their mission. Normally the sour side of organizing an art event, is that not every art is right for the theme of the event. But LINKED doesn’t have a specific theme, so they could be very open in their choice of artists, and be receptive for whatever the artist had in mind. For example, Ye Jianqing (China), made two new paintings specifically created for their event. ‘He was so pleased to work with us, that he created something new and different than what he was used to, and to make it fit in the gallery. It’s a great feeling and honoring to see that an artist trusts you enough to do this, which isn’t that obvious.’ 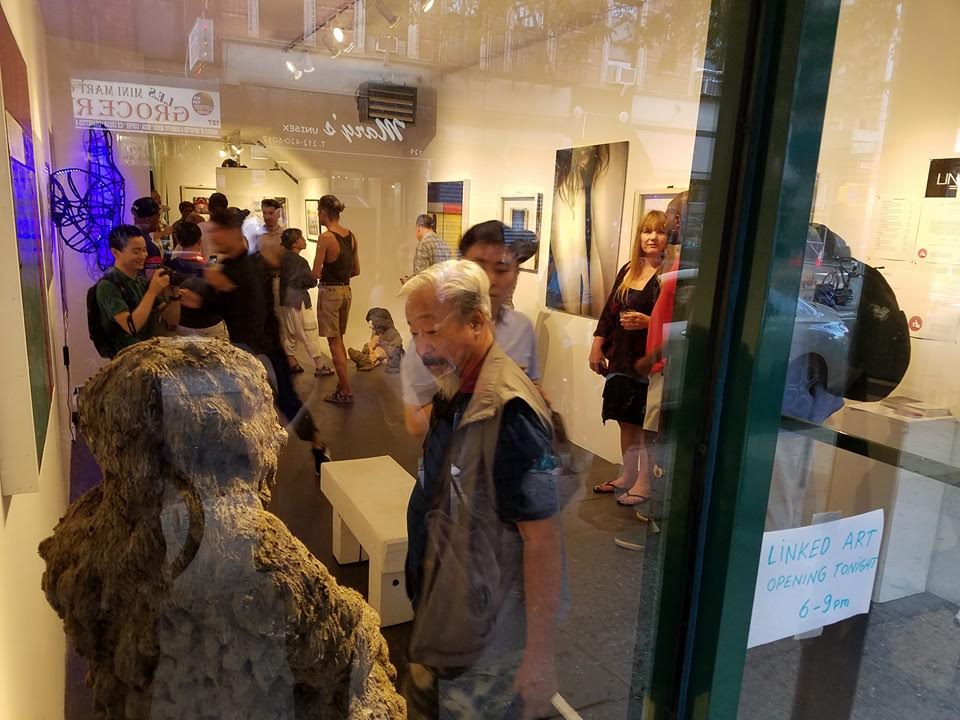 The artists that are exhibited at the LINKED event are a mix of completely different styles. They formed this group by placing a so-called open call on the website, and through contact that was already established. When Zjef and Patrick saw multiple similarities in the artist’s work, they decided to really link them to each other. An aspect that they will find out on the day of the Art opening itself. For example, sculptures by Paul Suepat (Jamaica) and paintings of Guy Stanley Philoche (USA); even the color has the same appearance. Linking them was just the most natural thing to do. We are so sure about our gut feeling regarding this linking aspect, that we only foresee positive reactions. And hopefully it will open up their minds as well. In this time, especially as an artist: you need each other. It’s simple as that. And after all, the idea and intentions come from a good heart.’

Next to organizing events, and some new projects that are coming up as an event designer, Zjef will keep himself busy with the production of his first men’s leather bag line “Big Apple Bag”, which is currently going into production in India. It will be the first fashion job again, since he moved to the United States. What started off as an innocent question from a friend, turned into an inquiry for three different men’s bag styles. So the future might not be set in stone for Zjef yet, but with his background in Shoe Design, it’s definitely heading towards a positive, creative direction.

Join the LINKED Art Week exhibition started on August 16, with a closing party on August 21. Throughout the week there will be some side-performances as well. Join in, explore and share your passion for art.