Dutch Culture USA met Remy Jungerman in his studio in Chinatown to talk about his residency, work, and motivations as an artist.

Sculptor and mixed-media artist, Remy Jungerman, is invited by the Marc Straus Gallery to work as their residence artist from May until July 2015. This Dutch/Surinamese artist studied at the Academy for Higher Arts and Cultural Studies in Paramaribo, Suriname. He then relocated to Amsterdam in 1990 to study at the Gerrit Rietveld Academy. Dutch Culture USA met Remy in his studio in Chinatown to talk about his residency, work, and motivations as an artist.

In his small but bright studio, Remy sits and begins to discuss Marc Straus’ residency invitation. Even though they had already met in 2009, it was only after Remy’s previous residency at Art OMI in 2013 that Marc showed interest in his work. A couple of months later, Remy received an invitation for a residency at the Marc Straus Gallery. On his way to participate in Prospect 3 The New Orleans Triennial last year, he also visited Marc in New York.

Marc Straus opened in the Lower East Side of New York in 2011. The gallery continues the contemporary art traditions of its founder to identify and foster examples of the best new international art talent. Sixteen artists are represented from 10 countries, most of whom have not  shown their work before in the United States. Marc Straus and his wife Livia have collected art since age twenty, focusing mainly on new and emerging artists. 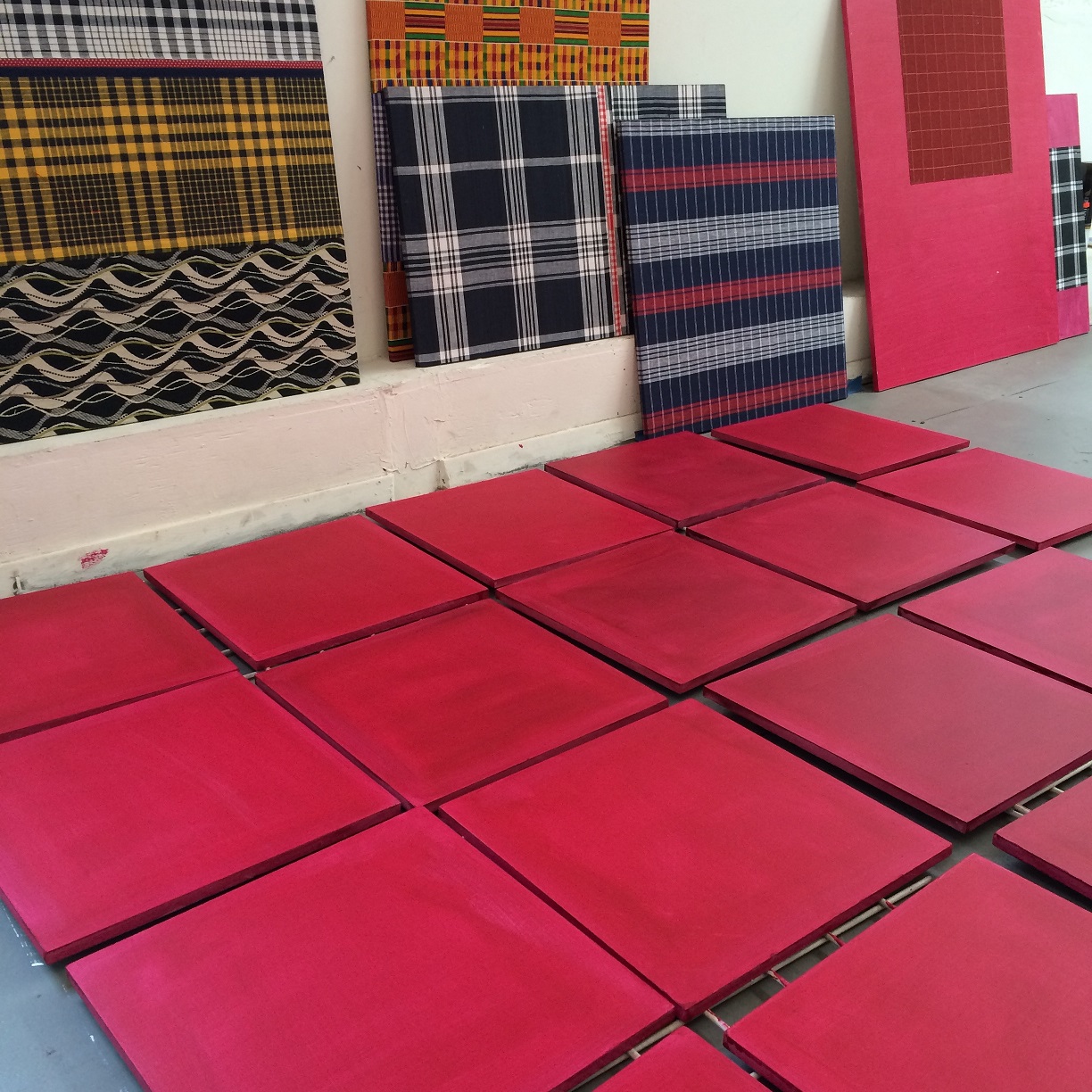 Remy expressed gratitude for this opportunity, which is financed through an interest-free loan from the Mondriaan Materiaal fund, ensuring he could leave for New York in May with some basic tools.

His artistic inspiration is spontaneous: “Like a painter who goes into the fields with just a little suitcase and some pencils.” Remy did have some ideas of what he wanted to accomplish prior to leaving. He had begun working with panels, and he plans to continue that idea and underlying mentality. He is inspired by the African textiles that are often worn in Suriname during rituals. In the patterns of these textiles, Remy is searching for parallels with Modernism and particularly De Stijl. He draws parallels to the geometric forms employed in Modernism to, “the traditional cultural tradition in Surinam.”  De Stijl developed in the 1920s, and a lot of so-called ‘marrons’, or runaway slaves, lived in the jungle of Suriname. They created patchworks or loin clothes with big geometrical forms that were related to the woven textiles in Africa. Remy explains that weaving is based on geometry, “it’s all small squares together.”

De Stijl functions in this work as a completely different story than the Surinamese traditions. Remy uses this for inspiration and as an ‘entrance’ in the understanding of what he does in the art. He tries to make connections from cultural traditions and questions his own position as an artist.
With his art Remy tries to connect continents. He looks to the meanings of things and where those meanings come from. The fact he links Surinamese traditional rituals textiles to geometrical lines of Modernism, makes his art ‘all inclusive’ and with an extra layer. Or even better said: his own thoughts are getting an extra layer during his residency in the Marc Straus Gallery. Remy is a busy man as he is working on different  projects at the moment. In August he’ll leave for Suriname to participate and coordinate in the first triennial of Suriname ‘Moengo Festival of Visual Arts’ in his birthplace, Moengo.
Also various other international artists made sculptures for the public space in previous residencies. This makes Moengo the first sculpture park of Suriname. In 2012 Remy participated in that residency ‘Tembe Art Studio Moengo’ sponsored by the Mondriaan Fund.

Next, he will show his work in a group exhibition ‘Global Inspirations’ from June 25 – September 6, 2015 in Gallery LUMC at Leiden, The Netherlands.

Currently, there is an exhibition in the Gemeente Museum Den Haag in The Netherlands until August 16. The title is ‘Crossing the Water’ and refers to his research of geometrical forms of Modernism and crosses the perspective of the African Diaspora.

During his residency he will continue this idea. “It’s about the sharing of this geometrical form and how it crosses the Atlantic towards the New World.” The work of Remy is intrinsically related to African cultural traditions and to the tradition of the Western modernist art. His Surinamese roots play a large role in his work. The residency offers the artist the opportunity to do research in an environment which is strongly influenced by the African heritage, e.g.  the patterns of the American south Gee’s bend quilts.

“This triangle of Amsterdam, New York, Paramaribo is really important for me.”

Not your typical artist

When asked what kind of artist he is, Remy laughs and answers “a mixed media artist.” But as he already knows, it turns out that it’s quite difficult to define or explain what a mixed media artist is, precisely. Remy explains that he uses different materials to complete one image, in a way it’s a collage-like technique. He creates spatial works as well as works on the wall, but they aren’t paintings. In terms of actual work it’s close to painting, except for the fact Remy doesn’t use a brush. He uses collages, sculptures and installations to show cultural critique(s) of the local and the global, the internal and the external. Traditional materials and objects are placed in different contexts that challenge the established notions of their representation within Western society. He concludes that his work could be a new discipline: between painting and sculpture and that it’s very versatile. 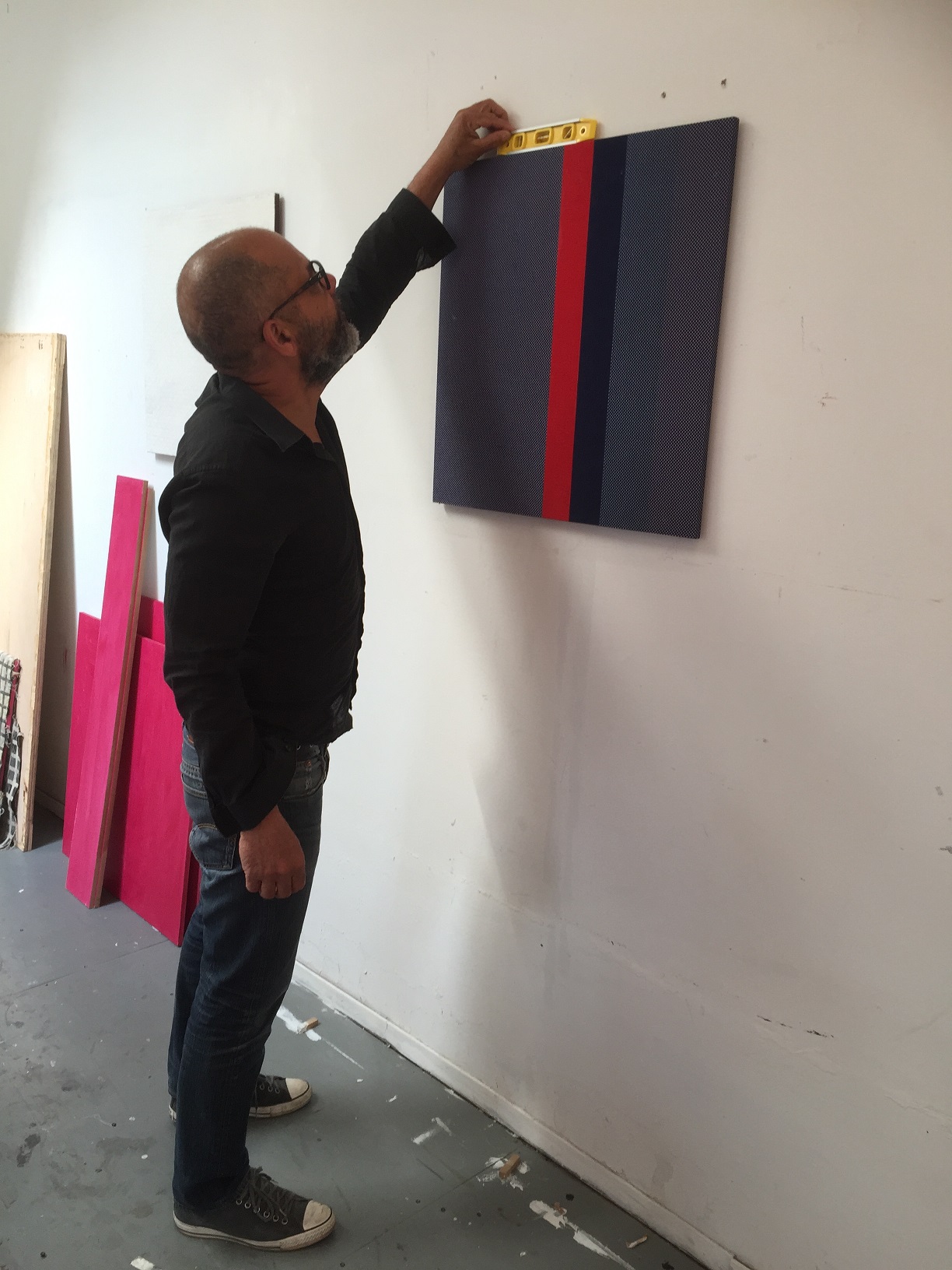 Remy Jungerman in his studio in New York

There must be more

Only a few people now that Remy studied Mechanical Engineering before attending an art academy in Suriname and the Netherlands. He had a nice job, beautiful house, good car and everything you could wish for. But all Remy could think of was: is this boring life really it? After seven years in working in the business sector, he wanted something more. “Everybody thought I was crazy,” but he went back to school and studied in the evening after his workday had ended. Attending an art academy wasn’t a logical choice, as he was raised without art or museums around. But Remy knew that to become who you truly are, you have to face some difficulties and overcome obstacles. As the steps in his journey were heavy, he finished both art academies and continues his trip in search of his position in the art. ‘You never know where you end up, but being in this studio in New York is another step on my journey.’ Remy believes you have to make big steps to accomplish big things in life.