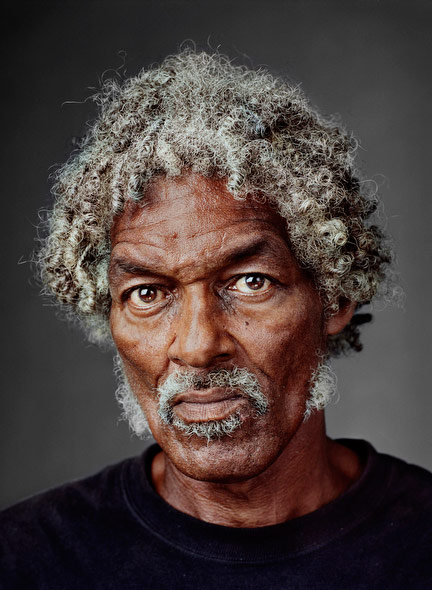 On Saturday, October 26, The Hagedorn Foundation Gallery in Atlanta, GA will be unveiling Down and Out in the South, an exhibition of Dutch photographer Jan Banning’s photographs of homeless men and women in the southern United States. The exhibition will run through January 4, 2014.

On Saturday, October 26, The Hagedorn Foundation Gallery in Atlanta, GA will be unveiling Down and Out in the South, an exhibition of Dutch photographer Jan Banning’s photographs of homeless men and women in the southern United States. The exhibition offers an enlightened approach to ideas of appearance and human dignity, even while the portraits are not the first images of modern society’s outcasts. Eschewing caricaturizing depictions, Banning places his subjects in a studio setting without their stereotypical belongings, focusing instead on their individuality — on who they are rather than what they are.  Ironically, Banning’s images resonate with the lighting and presentation of the individual that emerged with the Dutch portraitists of the 17th century, whose subjects were the wealthy upper classes of the Netherlands.

Banning studied social and economic history at the University of Nijmegen, the Netherlands and has been working as a photographer since 1981. His work always has a social focus. The social political environment is put at the fore and it often concerns subjects that have been neglected within the arts and are difficult to portray: state power, consequences of war, justice and injustice.

Several pieces from Bannings’ Bureaucratics, an earlier photo series of the bureaucracy in eight different countries all over the world: tax officers, clerks, police officers and other members of the executive, on loan from the High Museum of Art, will be shown alongside the arresting head shots of the homeless for the first week of the exhibition.

The project, the book, and the exhibition “Down and Out in the South” have been made possible with financial support from the Mondriaan Fund, the Stichting Sem Presser Archief, and photo lab De Verbeelding, all in the Netherlands. The program is also supported, in part, by public funds from the Consulate General of the Netherlands in New York. Special thanks to the 701 Center for Contemporary Art in Columbia, South Carolina.

The exhibition runs from October 26, 2013 to January 4, 2014. The artist will be talking about his work at 4pm on the opening day, with a reception following from 6-8:30 pm. Portions of the interviews that Banning conducted can be heard on his website:www.janbanning.com/gallery/down-and-out-in-the-south/#interviews. Smartphone users can scan the QR code to be taken to that webpage for the audio files. The voice recordings are anonymous to protect the individuals’ privacy.