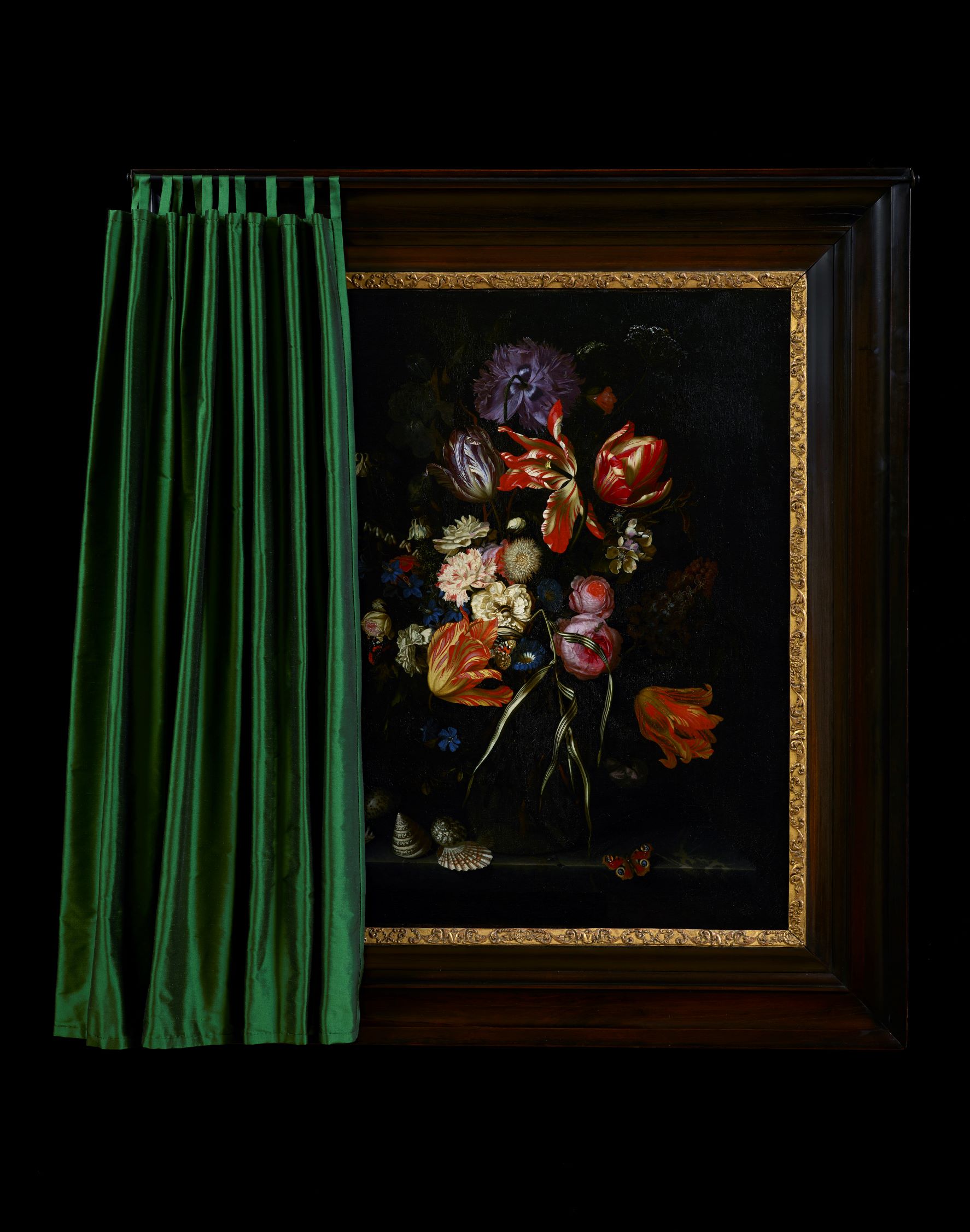 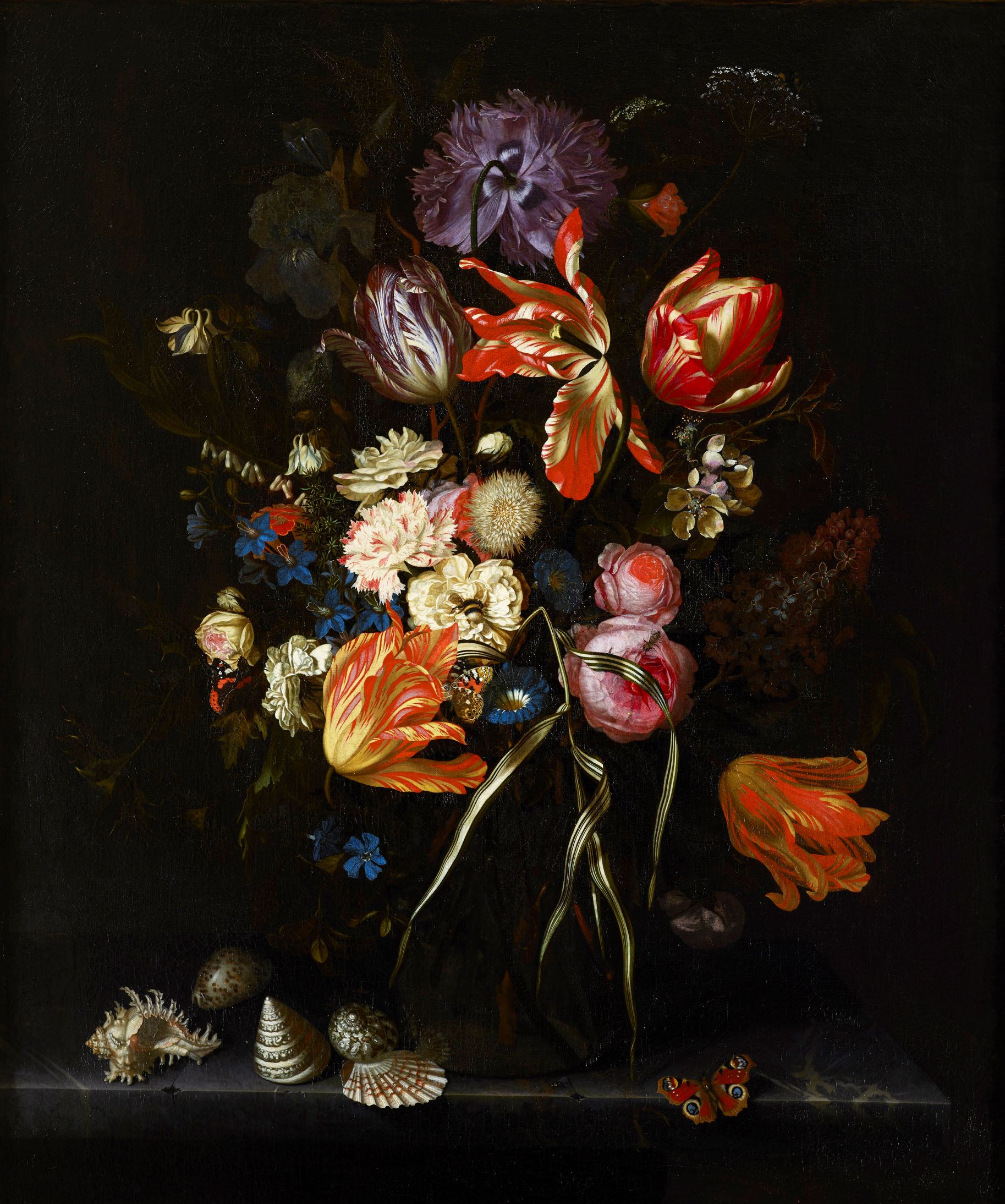 _T_he Joslyn Art Museum today announced the purchase of a seventeenth-century canvas, Still Life of Flowers in a Glass Vase (about 1685), by Dutch artist Maria van Oosterwyck (1630–1693). One of the few female painters active in Holland in the 1600s, Van Oosterwyck was a master of the floral still life. She enjoyed great success in her lifetime and counted King Louis XIV of France and King William III of England among her patrons. Her elegant floral arrangements set against dark backgrounds were especially admired for their diversity of flora, a characteristic exemplified in Joslyn’s painting. 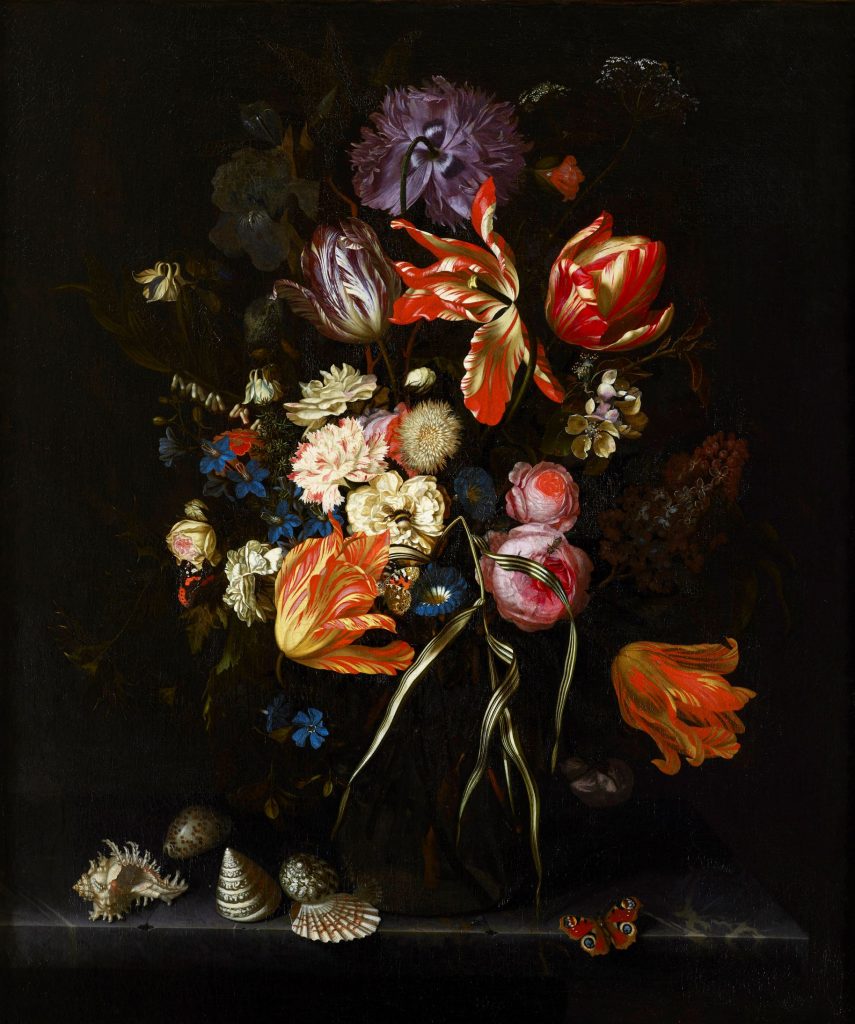 Taylor J. Acosta, Ph.D., Joslyn’s associate curator of European art noted, “Of the known works by Van Oosterwyck, this painting is one of the most significant in terms of quality and scale. The meticulous attention to detail and the great variety of blooms, as well as the inclusion of insects and shells, make this an excellent example of the genre.” The first floral still life to enter Joslyn’s collection, Still Life of Flowers in a Glass Vase represents an important step in diversifying the Museum’s collections. “Joslyn is actively working to increase the representation of women artists in its collections, and this addition marks the earliest example in the European collection,” said Dr. Acosta. Held in the same private collection for several generations, Joslyn’s acquisition of Still Life of Flowers in a Glass Vase, through Ben Elwes Fine Art, London, makes this extraordinary painting accessible to the public for the first time in over a hundred years.

Still Life of Flowers in a Glass Vase is on view at the Museum in the Scott Gallery (gallery 2) with other Dutch and Flemish paintings, including Rembrandt’s Portrait of Dirck van Os, completed around 1658. Part of the Museum’s collection since 1942, Portrait of Dirck van Os was definitively attributed to the hand of Rembrandt by Ernst van der Wetering, the leading Dutch authority on the artist, in 2014. Since that time, new acquisitions have included an interior scene by Gerard Donck and a landscape by Jan van Goyen, both dating from the early 1630s. “In the last few years, the Museum has endeavored to increase and diversify its presentation of paintings from the Dutch Golden Age,” said Jack Becker, Ph.D., Joslyn’s executive director and CEO. “The Van Oosterwyck is the latest work to build out the story of that important period in the history of the Netherlands. Exceptional in and of itself, it also allows us to better contextualize the Rembrandt and provides avenues for discussion of the work of women artists in this period, the genre of still life, the relationship between flower painting and the great tulip speculation in Holland in the seventeenth century, and the use of the picture curtain.”

Indeed, a unique feature of this painting is its frame, which is original and includes metal hooks to which a rod with a silk curtain would have been attached. In seventeenth-century Holland, curtains served to protect paintings from exposure to light, smoke, and accidental scratches. At the same time, the act of drawing back the curtain also added a sense of drama to the unveiling and underscored the importance of the work of art, as it was only to be revealed to a select audience. While the practice of covering paintings with curtains was not uncommon in Holland in the seventeenth century, finding a frame with its original metal hooks like this is rare. 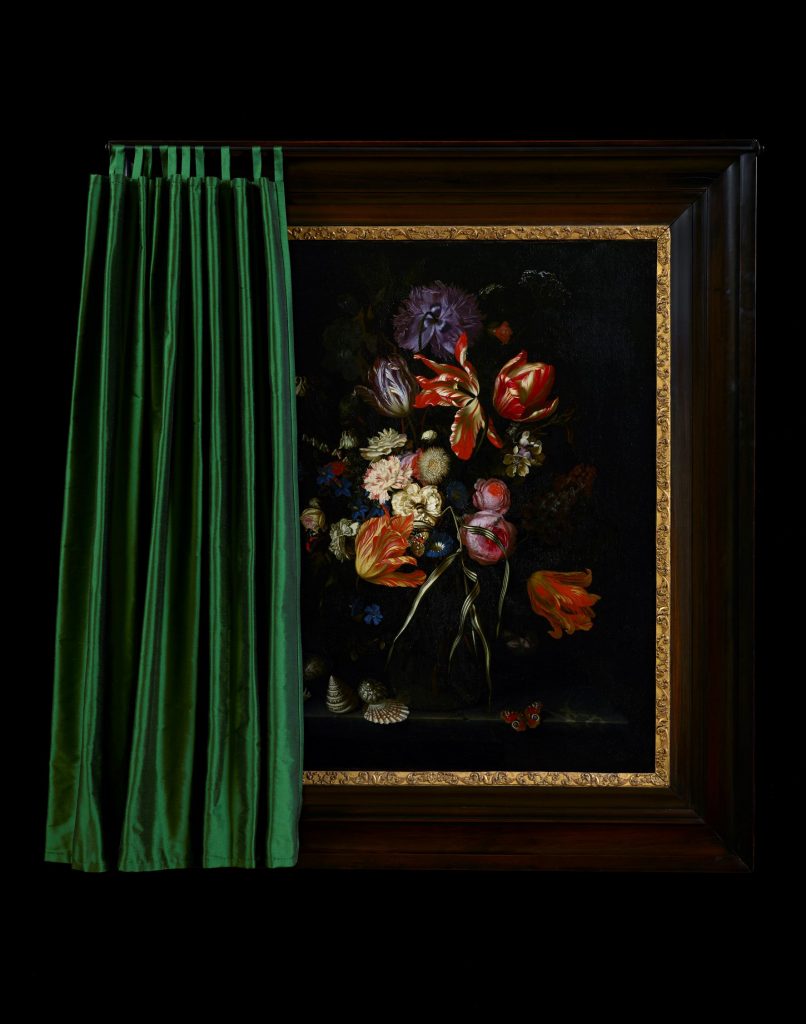 “There are only a few examples of original picture curtain rod attachments on seventeenth-century frames,” noted Hubert Baija, senior conservator of frames and gilding in the department of conservation and research at Rijksmuseum Amsterdam. “A study of Dutch frames published in 1984 identifies three such frames, and the work Joslyn purchased is the only other surviving example I have come across during thirty years of tenure at the Rijksmuseum. The Van Oosterwyck painting, which retains its original frame, is a truly unique acquisition for any art museum.”

In the case of Still Life of Flowers in a Glass Vase, a new rod and green silk curtain have been fabricated according to historical examples (pictured at right). This restoration makes it possible for a contemporary audience to experience the work as it would have originally been displayed. While the restored rod and curtain will not be part of the daily presentation of the work at Joslyn, they will be added on special occasions or for educational purposes.

Still Life of Flowers in a Glass Vase depicts a loosely arranged bouquet consisting of roses, tulips, apple blossom, morning glory, periwinkle, lilac, iris, carnation, hollyhock, columbine, and larkspur, which appear in different states of bloom in a short, reflective glass vase. Stems and long grasses are interwoven throughout; butterflies, a bumblebee, and other insects settle on several flowers; and five assorted shells and an additional butterfly appear in the foreground on a marble ledge inscribed with the artist’s name. There is a dramatic contrast between foreground and background, as the flowers emerge from deep shadow in highly saturated tones, adding to the illusion of three dimensions. 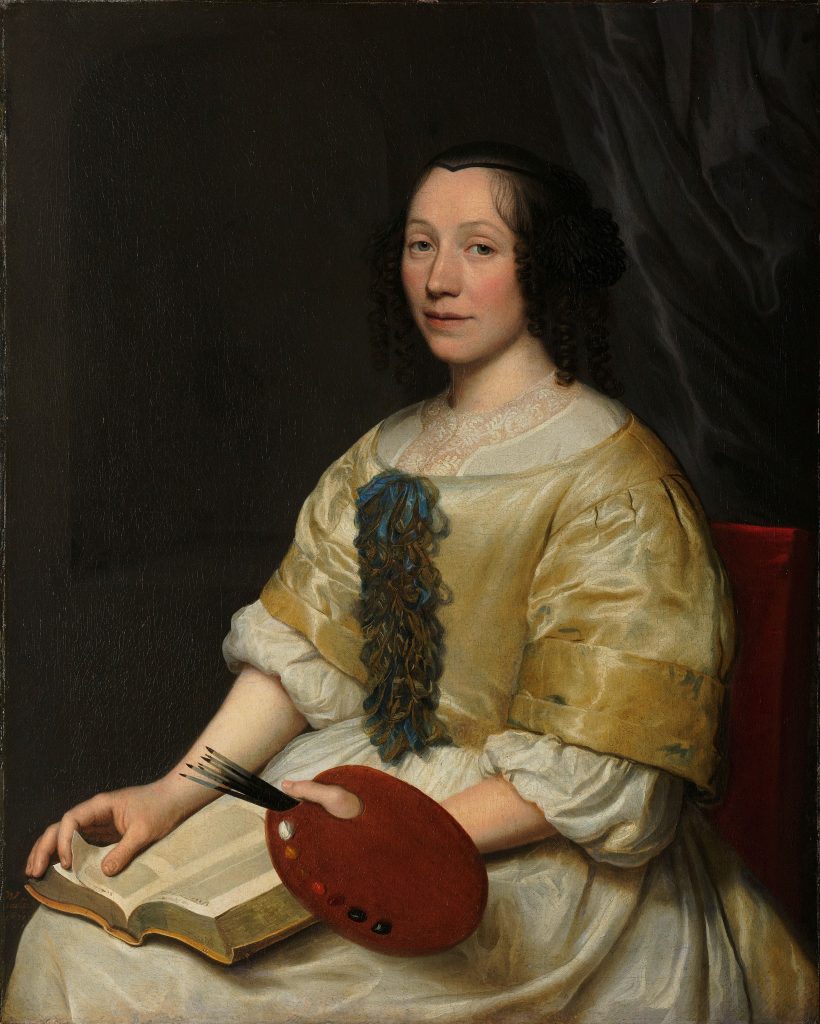 Maria van Oosterwyck was born in 1630 in Nootdorp, a village near Delft in the south of Holland, the daughter of clergyman Jacob van Oosterwyck. Little is known about her early training. In 1658, she moved to Leiden and in 1660, she relocated to Utrecht, where she likely studied with the still-life painter Jan Davidsz. de Heem (1606-1684). In 1666, she settled in Amsterdam, where she likely encountered the prominent still-life painter Willem van Aelst (1627-1683). Active from the early 1660s until about 1690, Van Oosterwyck enjoyed enormous success as a flower painter. Her patrons included Louis XIV of France, Emperor Leopold I, King Johann III Sobieski of Poland, the Elector of Saxony, and Stadholder-King William III and Queen Mary Stuart. Her work is characterized by a unique style and refined technique, marked especially by thoughtful detail, careful lighting, and fine brushwork. Never married, Van Oosterwyck died in Uitdam at age 63.

Although paintings from the mid-sixteenth century featured displays of flowers, the floral still life only gained prominence as an independent genre in the first years of the seventeenth century. Its emergence followed a broader trend of diversification of subject matter in the Netherlands that included other types of still life, landscape, animal painting, and scenes of everyday life. Such secular specialization was a response to the decrease in religious commissions following the Protestant Reformation and the increase in disposable income among the upper and middle classes. Flower paintings were very popular in the Netherlands at a time when owning rare, imported species of tulips became a status symbol. With flowers in different states of bloom and decay, the paintings also served as reminders of the transitory nature of life.

Joslyn Art Museum is the largest museum in the state of Nebraska and a cultural cornerstone of the city of Omaha. The Museum welcomes 190,000 visitors annually from all 50 states and dozens of countries worldwide. Joslyn’s comprehensive and globally-recognized art collections, from ancient to contemporary, are a significant cultural resource for the community and the region. The Museum’s education programs provide visitors of all ages with opportunities to learn from and respond to art, and to participate in many ways, including through their own creative expression. Committed to making access to art a reality for everyone, Joslyn offers free general admission to all, year-round.

The Museum was a gift to the people of Omaha from Sarah Joslyn in memory of her husband, George, who made his fortune as president of the Western Newspaper Union. The Museum’s original 1931 building is one of the finest examples of Art Deco architecture in the nation, with 38 types of marble from seven countries. The Walter and Suzanne Scott Pavilion, a 58,000-square-foot addition built in 1994, was designed by renowned British architect Norman Foster as his first U.S. commission. The Museum features galleries, a 1,000–seat concert hall, fountain court, education technology gallery, lecture hall, classrooms, sculpture garden, café, shop, and Art Works, an interactive space for art exploration. In October 2018, Joslyn announced Snøhetta has been selected to lead a physical and programmatic expansion that will be transformative for the Museum, the city of Omaha, and Nebraska.