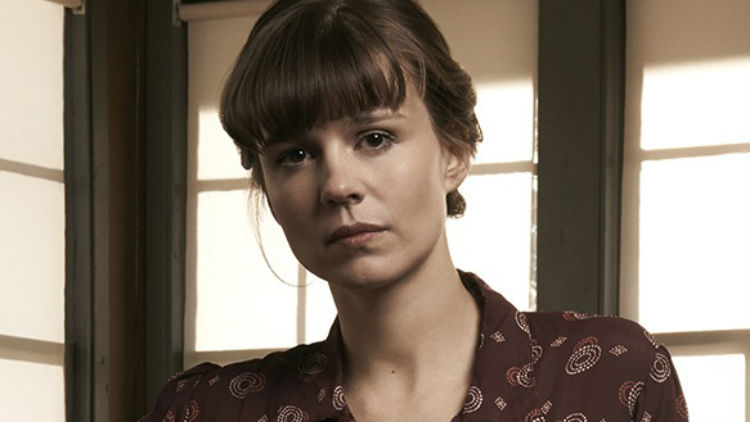 Dutch actress Katja Herbers plays one of the leading roles in the critically acclaimed WGN America series ‘Manhattan’. After the first season being a success a second season was announced. Season two will premiere in the fall of 2015 with Katja Herbers returning as Dr. Helen Prins.

Set against the backdrop of the greatest clandestine race against time in the history of science with the mission to build the world’s first atomic bomb in Los Alamos, New Mexico. Flawed scientists and their families attempt to co-exist in a world where secrets and lies infiltrate every aspect of their lives.

Katja is one of the Netherlands’ the most beloved actresses.  Treasured for the diversity of her talent, she has played major roles on screen as well as in the theatre.

After quite uniquely being accepted to both the Maastricht and the Amsterdam drama schools, she started her film career shooting PIETJE BELL, BRUSH WITH FATE during her studies at The Academy of Fine Arts in Amsterdam. She worked with director Alex van Warmerdam in the final year of drama school and had many offers to choose from after graduating. She decided to join Johan Simons’ ensemble at NTGent, where she played many different parts on stage, modern to classical, from Elfriede Jellinek to Billy Wilder to Marlowe.

She also met Ivo van Hove through Simons and worked with him on OPENING NIGHT (Cassavetes). He later asked her to play the lead in his feature film AMSTERDAM, which co-starred Marisa Tomei.

Katja comes from a family of successful classical musicians.  As both her parents travelled constantly for work Katja grew up with a Canadian au-pair and, with a German father and Dutch mother, she is now trilingual.

She played one of the leads in the Prix Europe and Emmy Awarded Television movie THE CHOSEN, directed by Theu Boermans.

They continued to work together on three plays by Arthur Schitzler, a writer of whom they both are big fans. She performed his monologue, MISS ELSE, under Boermans’ direction gaining rave reviews and shocking the Dutch Theatre establishment.

She worked with the Oscar nominated and Emmy Award winning director Ben Sombogaart on the blockbuster feature THE STORM.

Critics raved about her portrayal of the Dutch Princess Maxima in the mini-series BEATRIX. In BRAMMETJE BAAS she played a loving but tormented young mother, whose child doesn’t seem to fit in this world.

Rudolf van den Berg directed her in the feature film SÜSKIND, in which she played the right hand of Walter Süskind, who helped over a thousand Dutch children escape the Nazis during World War II