Bimhuis, the venerable performing arts center in Amsterdam, celebrates its 40th anniversary with festivities and a documentary screening at the Constellation in Chicago.

On Friday November 28 and Saturday November 29 the Bimhuis celebrates its 40th anniversary with a series of free events in the Constellation in Chicago. On November 28 duo Fay Victor & Tristan Honsiger perform and the documentary ‘Misha Enzovoort’ will have its premier screening. On November 29 Amsterdam Real Book performs. Both evenings start 9:30 PM.

The ideals that Constellation is based upon are highly influenced by the Bimhuis, the venerable performing arts center in Amsterdam. In celebration of the Bimhuis’ 40th anniversary as a center for progressive performance in jazz and improvised music, it is the Constellation’s distinct honor to officiate over celebrations in Chicago as part of the City Links program. Through sustained efforts to build an international community, the Bimhuis and Dutch jazz tradition has consistently created deep connections around the world, and this is true especially of Chicago.

This free evening of events will showcase the deep impact the Dutch tradition has had around the world, as well as the creative forces that are at the center of 40 years of concerts at the Bimhuis.

Festivities will also include a premier screening of the documentary Misha Enzovoort about the final appearance abroad by the great Dutch pianist Misha Mengleberg as he deals with dementia (view below).

The Bimhuis was founded in 1974, three decades prior to the completion of the current building. The former furniture showroom on the Oude Schans near Amsterdam’s Red Light district had been acquired by few musicians who had just become members of the recently founded Beroepsvereniging voor Improviserende Musici (BIM), such as saxophonist Hans Dulfer and pianist Misha Mengelberg. It was a time of new, enthusiastic initiatives in jazz, with a conscious choice to depart from traditional approaches. In the Netherlands this led to the formation of such progressive ensembles as the Instant Composers Pool and Willem Breuker Kollektief. 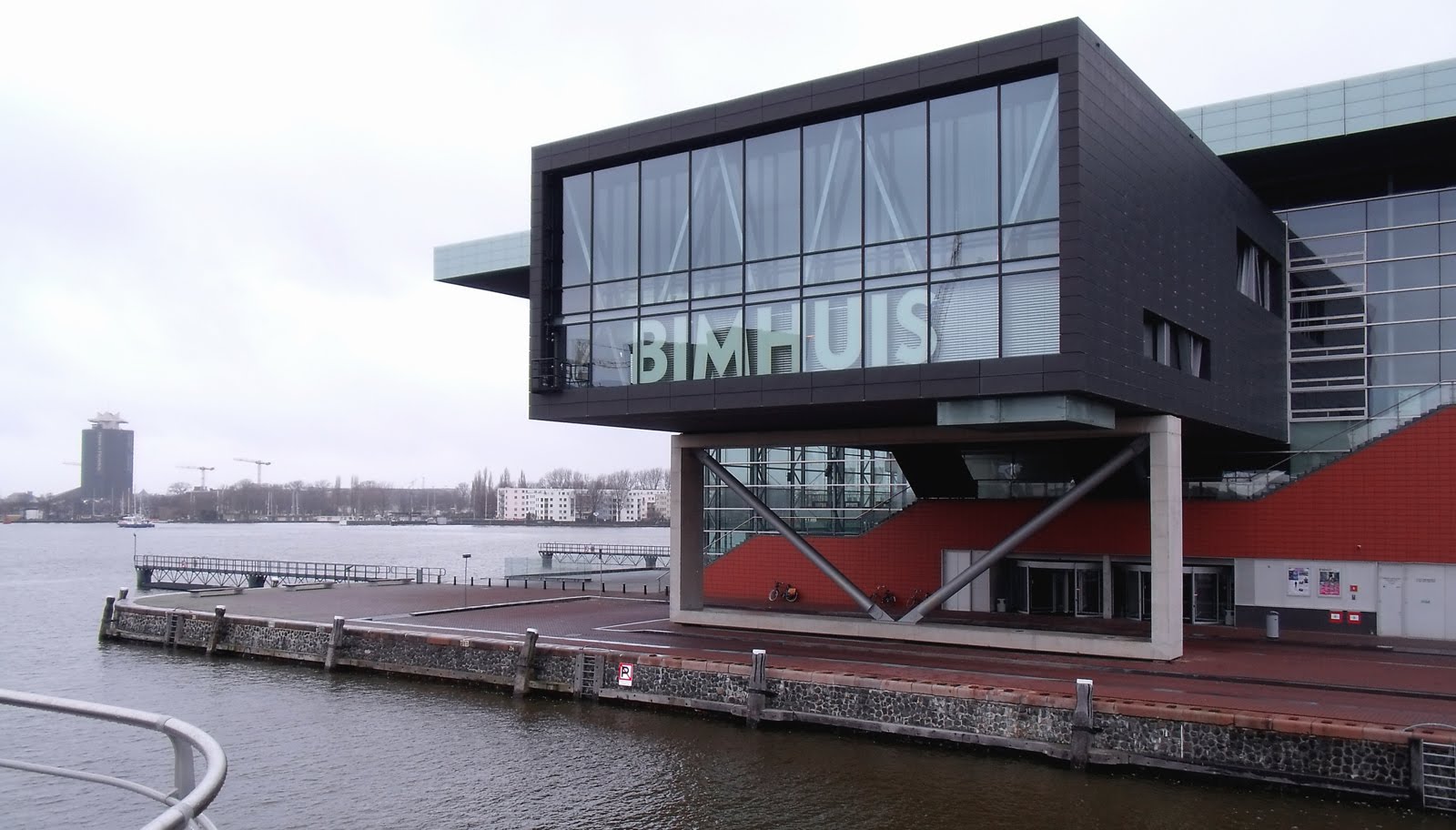 The Bimhuis quickly achieved the status of the premiere Dutch venue for improvised music and the hall became a favorite spot for such renowned international bandleaders as Charles Mingus, Archie Shepp, Cecil Taylor, Pharoah Sanders, and Sun Ra. The space was simultaneously made available to new Dutch initiatives, conservatory students, and apprentice orchestras. To this very day, the Bimhuis continues to be a spot where new bands and projects are formed in which local and international musicians collaborate.

In 1984 the building underwent drastic renovation, whose most important feature was a hall in the shape of an amphitheatre. This allowed for an intimate atmosphere near the stage, while still allowing the audience to circulate at the back of the space to the adjacent bar. A professional recording system was installed which resulted in many concerts either being recorded for LP and CD releases or radio broadcasts. By the nineteen eighties and nineties, the revolutionaries from the initial years had become internationally respected band leaders. 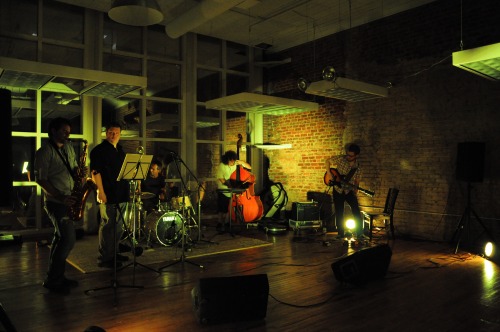 The present-day Bimhuis opened in 2005. The characteristic ‘black box’ protruding from the Muziekgebouw aan ‘t IJ, was designed with the old Bimhuis in mind. The lay-out of the stage and access to the bar have remained the same, but now everything is more spacious, comfortable, and technically advanced. The Bimhuis annually receives twice as many visitors now as the old venue did in its most successful year ever. Everyone plays there now, from stars to amateurs, from mainstream to avant-garde. In essence, the Bimhuis has basically remained the same: an important junction in the international network of improvising musicians.

The Amsterdam Real Book started off as a project to build a bridge between the new up-and-coming scene of improvisers in Amsterdam around such players as Yedo Gibson, John Dikeman and Oscar Jan Hoogland, and the internationally known New Dutch Swing scene with its roots in the instant composing of Misha Mengelberg, Han Bennink and Willem Breuker. Full on rock-based free improv meets lively jazz-based instant composing. The Amsterdam improvisers are famous all over the world for their groundbreaking treatment of composition within jazz. Cutting-edge playful and smart. 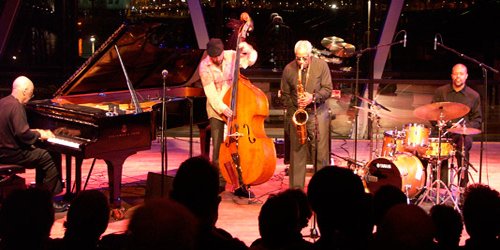 The Amsterdam Real Book project doesn’t have a fixed line up. Different players work in different constellations and settings to create, revive and sustain an oral scene-based history of Amsterdam repertoire. Past editions have included three bike tours visiting the underground stages of Amsterdam, a week long festival, and concerts at OT301, Bimhuis, Muziekgebouw aan ‘t IJ and the Amsterdam Museum.

In command, infectious, energetic and strong, Fay Victor hypnotizes audiences, whether she sings a blues, sculpts a free piece, reinvents a Herbie Nichols tune through her own lyrics, or effortlessly improvising over the harmonies of a jazz standard or her own material with lyrics that speak of universal themes in story-driven ways, running the full gamut of human emotion in an original mix of traditional song forms and free improvisation – or “FreeSong” – that has become Victor’s trademark approach to improvised vocal music.

The trademark not only applies to Victor’s own groups and original music but also to esteemed ensembles and band-leaders that have featured her unique vocal abilities, so unique in fact, that the ensembles Victor is now featured rarely, if ever, have vocalists in them. Other Dimensions in Music (ODIM), the perennial free jazz outfit going on 40 years of existence joined forces with Victor for 2012′s Silkheart Release, Kaiso Stories (which Victor also produced) that was lauded for its unique fusion of Calypso and free jazz as well as the original synthesis of Victor’s vocal approach with the groups’ dynamic range of expression. Victor has also been featured with the Misha Mengelberg/Han Bennink outfit the Instant Composer’s Pool Orkest, touring with the Dutch group in 2010 and appearing with them during their 3-day run in Philadelphia last year while on their US tour. Victor is one of the vocalists in Anthony Braxton’s Tr-Centric Orchestra, featured on Trillium E (New Braxton Records 2011) and the performance of Trillium J during the four-day Braxtonian Festival held in October 2011 at Roulette in Brooklyn, NY and Victor toured with the Dutch reedist Ab Baars celebrating 20 years with his trio. It was the first time the reedist had written material for voice and specifically for Victor.

TRISTAN HONSINGER:
Born in New England, the cellist Tristan Honsinger studied at the Peabody Conservatory in Baltimore. By the ’70s, the Trans-American had moved to Amsterdam and formed the Instant Composers Pool with drummer Han Bennink and radical pianist Misha Mengelberg. With this avant-jazz group, his music transcended the classical conservatory background he had and he began to incorporate wild, free improvisation, jazz, and European folk music into his cannon, not to mention a kinship with Bertolt Brecht theatre, which would put an edge on performances and recordings that take on experimental strategies, some of which include what could be considered violent attacks on the instrument. Here he would find a kinship with Cecil Taylor, who also liked to make small explosions inside his piano. Honsinger worked with the great pianist in Europe, with Steve Lacy, Lol Coxhill, and Louis Moholo among them in the European free jazz community — which, in the ’70s, was thriving as far away as Florence, Italy. Honsinger found a home there in 1978 for a number of years. Working with the more extreme experimental Gruppo Du Improvisazione Nuovo Consonanza (Improvisational Group for New Consonance) members Giancarlo Schiaffini and Gianluigi Trovesi. Having worked with many groups and ad hoc improvisation setting through the years, interests in theatre, dance, and opera influenced his performances considerably.