On May 3, jazz-musician Marike van Dijk releases her new album The Stereography Project Vol 2, featuring vocalists Jeff Taylor & Katell Keineg. She will also perform that night at The Jazz Gallery in New York, NY. Click here for tickets, and here to buy the new album.

New York City does not have one sound. The city of cities has millions of sounds, more than its five boroughs can hold, all of which excite musicians and the larger public. Revelations and reverberations abound. Yet sometimes it takes an outsider with a decent amount of intuition and insight to make these sounds echo around the world. Enter saxophonist & composer Marike van Dijk, who spent a half a decade living and working in New York City, developing her “Stereography Project” over that time, amongst a number of other collaborations and musical endeavors.

‘What I wanted to do with Stereography, was to bring a couple of incredible singers to Europe’, says van Dijk, the Dutch-born ringmaster behind this wild, beautiful and emotionally challenging cinematic chamber music. ‘There’s so much talent in New York, so many incredible musicians that don’t very often make it out of the city.’

Night after night, year after year, van Dijk traveled throughout the city in search of singers, stories, and songs, until she found Jeff Taylor and Katell Keineg. Both singers are also songwriters, highly praised by peers and press alike, with credits from Iggy Pop to Trixie Whitley to Donny McCaslin to Mark Giuliana. Thus it’s hard to believe each is still flying under the radar. Even more so once you listen to their songs and voices on these “Stereography” arrangements by Marike van Dijk.

Played by a rather large and unconventional ensemble, this music truly travels beyond borders and genres. “Both Katell and Jeff have a certain raw emotion that I can identify with, which touches me very deeply”, Marike says. ‘I think, knowing my own background in orchestral music, in jazz and punk, the formation of this group and this record makes sense. It’s a combination of the things I love doing and love listening to.’

Front and center are the singers and their songs. Katell Keineg, born in Brittany and raised in Wales, has been called “folksy and hypnotic” by TIME, while Rolling Stone added that it’s ‘damn near impossible to listen to her earthy and ethereal voice without feeling the spirit move you’. This has led to artists like Iggy Pop, Calexico and Sinead O’Connor featuring her. Keineg has released a dozen albums, EPs, and singles under her own name for labels from Elektra to Honest Jons.

Jeff Taylor may be best known as the singer on Donny McCaslin’s tribute to his late employer David Bowie, where he shines on a version of the Thin White Duke’s “A Small Plot of Land”. The proud New Jersey native has also toured the globe with Trixie Whitley and Sara Bareilles, played Larry the Dwarf in the Los Angeles Philharmonic’s production of Frank Zappa’s “200 Motels”, and has been a core member of drummer Mark Giuliana’s Beat Music.

The music on her sophomore Stereography Project record was recorded both in New York and in Amsterdam with separate ensembles. Van Dijk holds these musicians in high esteem, largely for their individualistic personalities. “When I put these bands together, I really thought about combining distinct, unique musical personalities, not just people who play my scores, but people who can really add something of their own voice to my music. That’s what makes this a real band. And this second “Stereography” album has a lot more space in the scores where I ask the musicians to improvise and really listen.”

Check out Taylor’s heartbreaking “Paper Thin,” or Keineg’s mystically mellow “Old Friend.” Or any other of the wonderful songs on this album, a thoroughly cohesive collection of stories in song, magnificently selected, arranged and conducted by van Dijk, in whose writing fellow arranger Gil Goldstein found “an organic quality” and “great honesty.”

‘I’ve always really enjoyed listening to very ‘real’ musicians and songs, which is what I love about Jeff and Katell’s music,’ Marike remarks. ‘It was quite challenging, however, because I felt I needed to be very respectful of their music and didn’t want to have the arrangements interfere with the songs themselves. I’m happy both singers really enjoyed the process and the arrangements.’

The listener, in turn, will enjoy this glimpse into these bizarrely beautiful sounds of New York, a sonic landscape unlike anywhere else. The music illustrates the magnetism of the island of Manhattan and its surrounding boroughs. “New York is what ties me to Jeff and Katell”, Marike says.

‘Jeff lives in Jersey City, which is across the water from Manhattan, and spent most of his musical life in New York City, so the city and its musicians are an inspiration for his songs. Katell lived in New York for a long time as well and some of her songs like “At the Mermaid Parade” are very clearly influenced by living in New York City. For me, it’s a place where I spent five formative years; where I initially conceived this band and the project. It is an important place for me, where I have a lot of friends and amazing colleagues and which continues to inspire me.’ 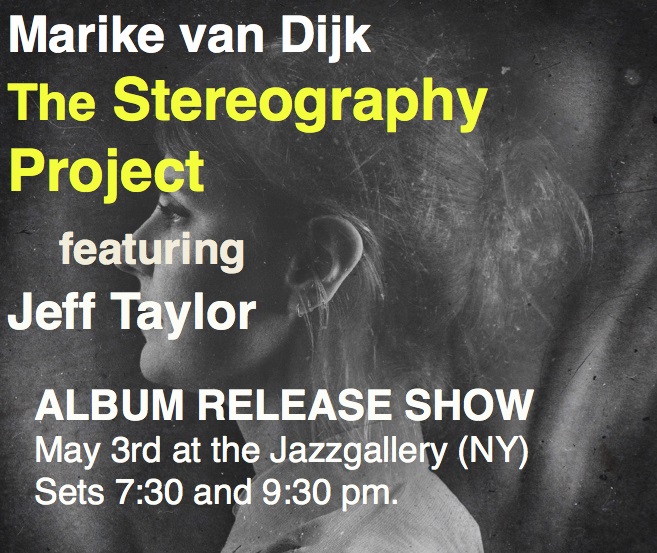