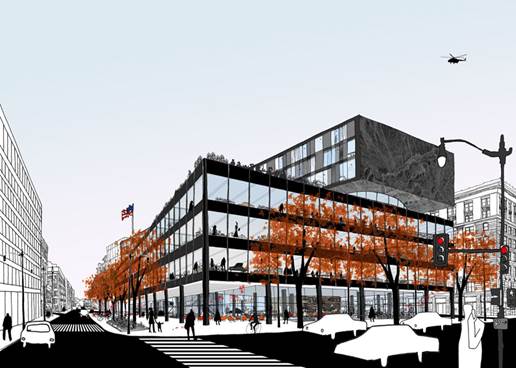 The MLK Library will be an attractive catalyst for community activity. The MLK Library, completed in 1972, is designed by one of the great 20th Century architect Mies van der Rohe and honors the legacy of Dr. Martin Luther King Jr.

The potentially $150 million project will redesign the 250,000 square foot interior of the 1970s library to modernize the building. The MLK Library is the hub of the Public Library system in Washington, D.C. It’s the only library designed by modernist Ludwig Mies van der Rohe, and opened three years after his death in 1972. The teams were asked to submit two ideas: what they would do if it was a straight library renovation, as well as possibilities for a mixed-use building with additional floors above the existing building.  Mayor Vincent Gray: “This takes us to a new stage. I am excited about the “bold vision” for the renovated library.”

Leading the design effort will be the Netherlands based firm Mecanoo. Mecanoo’s work often intervenes within existing building fabric, creating new and exciting interpretations. The practice designs public buildings that are embraced by their users, respect the social and natural environment, and consciously contribute to the quality of life in urban centers. Washington based Martinez+Johnson has extensive experience with historic renovation projects. M+J will share responsibilities with Mecanoo throughout the project. The design team will be led by Francine Houben, creative director/ architect at Mecanoo who just delivered the Library of Birmingham, the largest in Europe. Francine Houben “We will pay respect to Mies van der Rohe and research what is possible to prepare this building for the Library of the Future. But most important is bringing out the values of Martin Luther King. My dream is to make this building to reflect his ideals. “