On June 10, Blue Crime will perform their so called 'moon pop' music at Palisades, as a part of Northside festival. Meet the band in this second episodes of #meetingthebands, created by Dutch Culture USA.

This experimental four-piece monster was born in an Amsterdam bunker and is ready to take the world by storm. Playing mysterious moon pop, its show is a trip from the disarming to the wrenching. Prepare to be swept off your feet by dreamy yet sinister songs – or by a mosh pit. You can join the mosh pit! Or just stand in the crowd enjoying their talents, on June 10 at Palisades.

An experimental four-piece born in an Amsterdam bunker, their music is at once disarming and devastating. Did the wolf devour the moon? The story unfolds on their freshly released EP ‘Tyr’, out early summer of 2015 on the Meduse MagiQ label. Closing their EU tour with a show accompanying Chelsea Wolfe, BLUE CRIME traded the sun for the moon and headed back underground to craft their first full length record, because all dreams start in the dark.

Blue Crime is a haunting discharge of dark, retrogressive psych packaged in self-proclaimed ‘moonpop’. Saturated in visuals projected on their bodies, they create an experimental universe inviting the audience to join them on a voyage. Their release-tour has started in the spring of 2016 in Europe and the UK, and now continues in a Canadian/ United States tour that kicked off in Toronto. 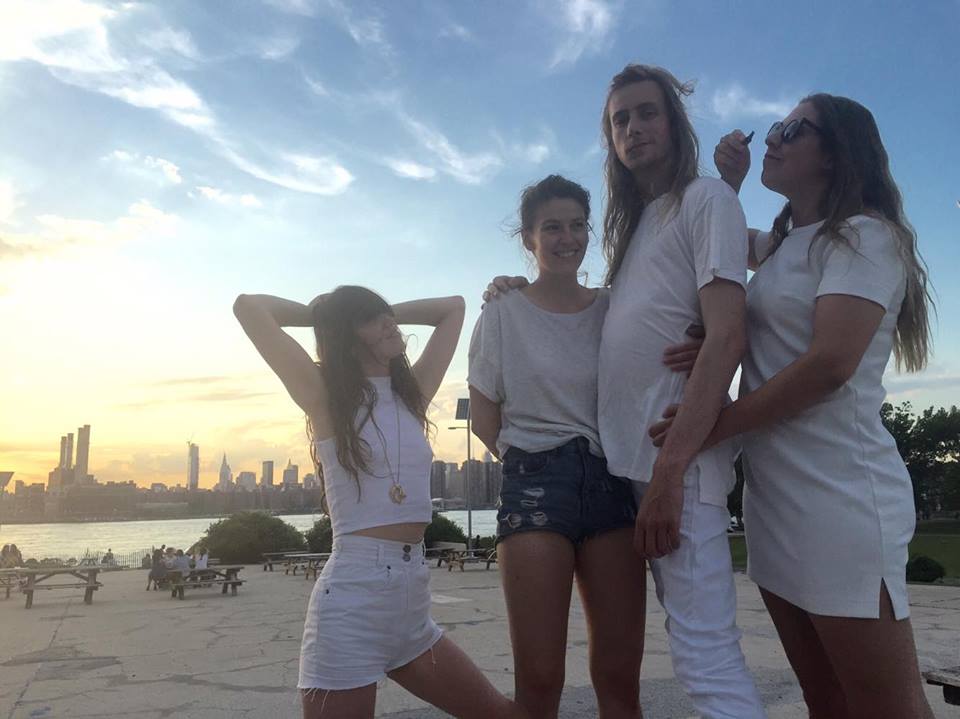 ‘Blue Crime took to De Nieuwe Anita in support of Italians Be Forest, outshining the latter – in dress and sound – for what was perhaps one of the best local performances of the year.’ – Subbacultcha

‘Their (doubtless unwitting) Star Wars stealing La Dusseldorf ’s white clothing gambit certainly made more sense on AA’s high stage, they were out to make a statement. One thing is immediately noticeable; they can play in a way that many bands don’t; they have this (aybe nascent) grandeur about their music. They like space in their tracks, demand you listen, and don’t seem to want to apologise for their presence. I really like that; a mix of Quo’s ponytailed menace and the Sun King’s chamber orchestra on a quiet, post-Baroque bender. – Incendiary Magazine