MMMMAVEN received an official proclamation from the Boston Mayor 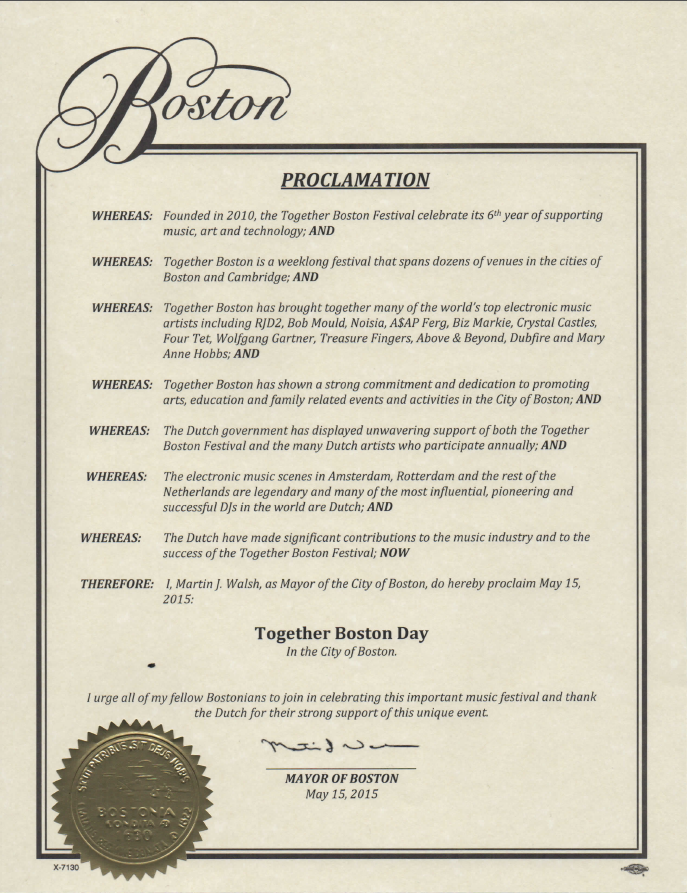 In light of the recent succesfull collaboration between Sekoia, Together Boston and Dutch Culture USA, MMMMAVEN received an official proclamation from the Boston Mayor, Martin J. Walsh, recognizing their contribution as well as the Dutch impact on Boston’s culture and electroninc music scene.

The Dutch night on May 13th with Martyn, Tom Trago, Florinsz, Cursed P and Heleen Blanken was very well attended as was the Resident Advisor Exchange in depth conversation with DJ Martyn, which soon will be released as podcast. The cherry on the pie was the proclamation issued by the Mayor of Boston, Martin J. Walsh (see below)

In the words of Together Festival’s Managing Director Alex Maniatis, the Dutch presence marked a most unique and exciting partnership, with a focus on all things Dutch electronic music, culture, and awareness: “The Dutch electronic music legacy is always growing, adapting and creating, and that’s why its fits so well with Together. It’s easy to sound the same as everyone else but we try to program forward thinking acts every year and bring something different to the table.”