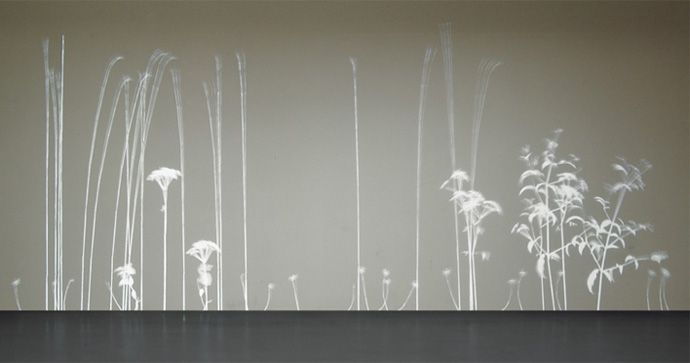 MoMA is installing Simon Heijdens' Lightweeds, which they acquired in 2008, in the Permanent Galleries 3F. The installation will be on show from February 14 until May 2015.

MoMA is installing Simon Heijdens‘ Lightweeds, which they acquired in 2008, in the Permanent Galleries 3F. The installation will be on show from February 14 until May 2015.

Lightweeds (2006) is a site responsive, living digital organism growing onto an indoor space. Uniquely generated plant families that grow up, move and behave closely depending on actual sunshine, rainfall and wind as measured live outside. On passing human traffic they bend, loose their seeds and pollenate to other walls throughout the space, to make up a constantly evolving bio system that reveals the character of the space and how its used.

Nature is becoming rare in daily life. In the way the urbanising world is generally built and planned, our everyday surroundings are increasingly perpetual and static through conditioned climates and 24 hour lighting. When unpredictable natural elements such as a lifting breeze, a sudden shower, or a setting sun are planned out of our surroundings, the timeline of our everyday is lost.

Lightweeds has been exhibited around the world in different museums and is not only part of the permanent collections of MoMA, but also of The Israel Museum Jerusalem, The Hong Kong City Council and UMNH Salt Lake City.