MVRDV breaks ground today (November 15th, 2018) on Radio Tower & Hotel, a 21,800-square-metre mixed-use high rise located at 2420 Amsterdam Avenue in the Washington Heights area in Northern Manhattan. The 22-story building, which is MVRDV’s first major project in the United States, combines hotel, retail, and office functions in vibrantly stacked blocks, reflecting the vivacious character of the neighborhood and setting a direction for the future development of the area. Completion of the building is expected in 2021. 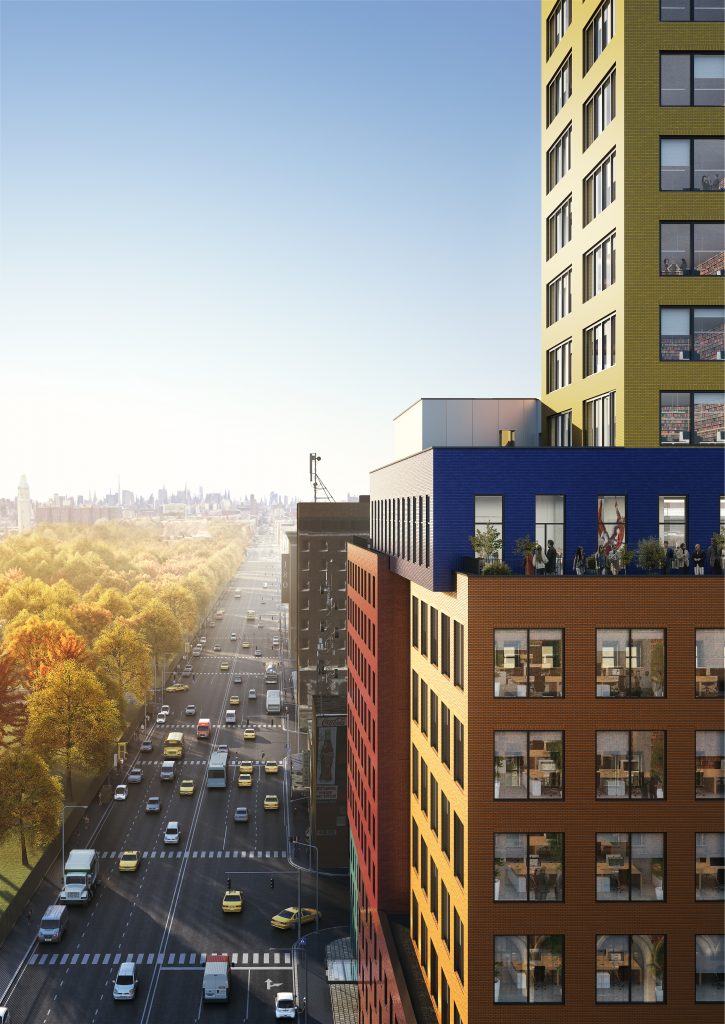 Designed for developer Youngwoo & Associates, Radio Tower & Hotel will occupy a currently underutilized lot at a crucial intersection: where Amsterdam Avenue meets the Washington Bridge, which connects Manhattan to the Bronx; and just one block away from the I-95 highway, one of the major links between Manhattan and New Jersey.

The distinctive massing of the building resolves the project’s main challenge: accommodating a large volume of program while remaining contextual. Radio Tower & Hotel takes the typical composition of a small block in Washington Heights, pulls it apart and then reassembles it into an asymmetrical stack of boxes with openings and roof terraces. These boxes are designed to appear like separate buildings: each is roughly the same size as others in the neighborhood and features its own specific window pattern inspired by the nearby buildings. The boxes also take inspiration from the vibrant colors of the shopfronts in the majority-Hispanic neighborhood, with each part of the building being finished in a different color of ceramic bricks. Combined, the elements of the building’s external appearance form a condensation of the characteristics of Washington Heights’ existing urban fabric. 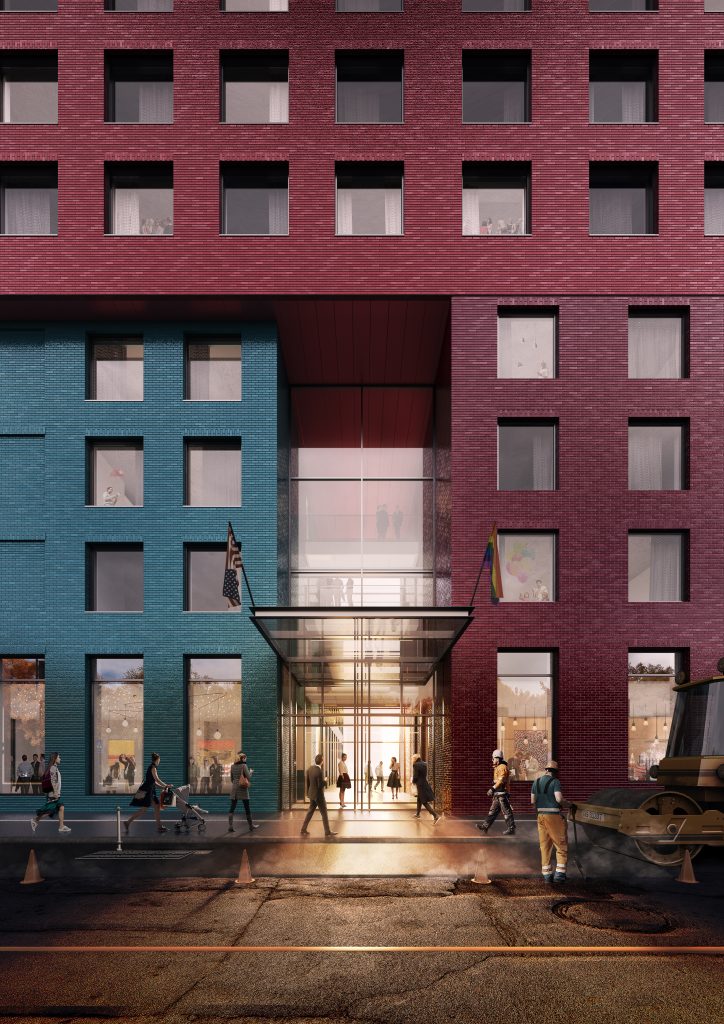 Inside, Radio Tower & Hotel provides an answer to the area’s need for a diverse range of hotel rooms, workspaces, event spaces, and retail units. Washington Heights is the 5th largest neighborhood in New York with a population of over 150,000 people, but it is currently served by just two 50-room hotels. The Hotel will therefore be an important hub for those traveling for conferences hosted by the Yeshiva University and the New York Presbyterian Hospital, both of which are located nearby. Meanwhile, the event space located in the building’s blue volume will add a facility that did not previously exist in the neighborhood, offering locals a space to host weddings and other parties with spectacular views from the adjacent rooftop terrace. 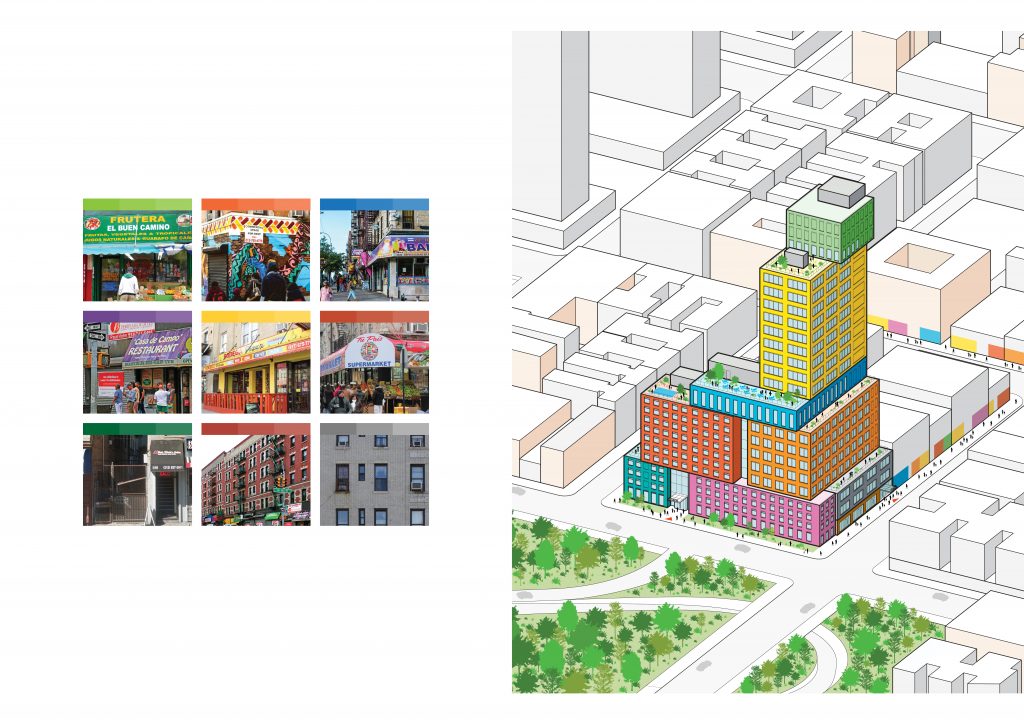 “Radio Tower & Hotel, located at the thinnest part of Manhattan Island between the Hudson and the Harlem River, is a colorful new building which will strengthen an already wonderfully mixed and vibrant neighborhood”, explains Winy Maas, principal and co-founder of MVRDV. “The building forms a ‘vertical village’ with blocks that are the same size as the surrounding buildings, thus avoiding the common drawback of large developments in which new skyscrapers overwhelm the existing character of the city. It will be a colorful, welcoming beacon for people entering Manhattan.” 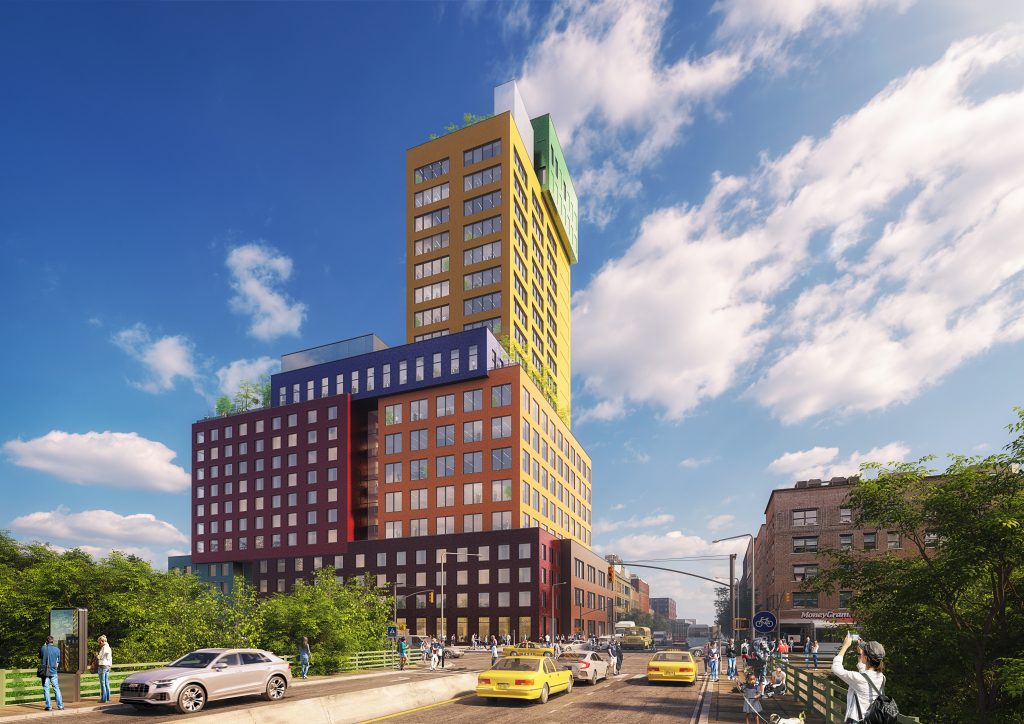 MVRDV was set up in 1993 in Rotterdam, The Netherlands by Winy Maas, Jacob van Rijs and Nathalie de Vries. MVRDV engages globally in providing solutions to contemporary architectural and urban issues. A research-based and highly collaborative design method engages experts from all fields, clients and stakeholders in the creative process. The results are exemplary and outspoken buildings, urban plans, studies and objects, which enable our cities and landscapes to develop towards a better future.

Early projects by the office, such as the headquarters for the Dutch Public Broadcaster VPRO and WoZoCo housing for the elderly in Amsterdam lead to international acclaim. 200 architects, designers and other staff develop projects in a multi-disciplinary, collaborative design process which involves rigorous technical and creative investigation.MVRDV works with BIM and has official in-house BREEAM and LEED assessors. Together with Delft University of Technology, MVRDV runs The Why Factory, an independent think tank and research institute providing an agenda for architecture and urbanism by envisioning the city of the future.