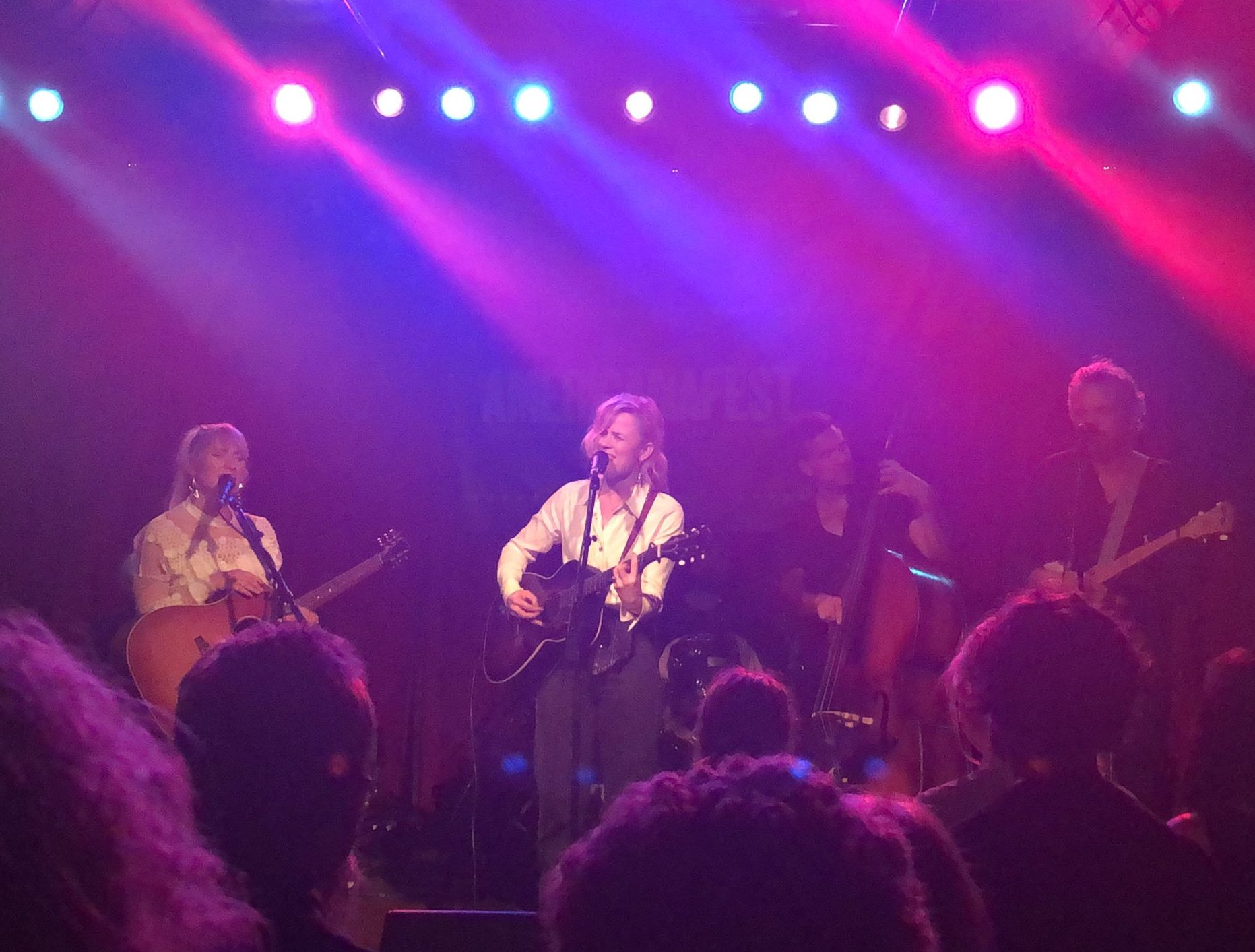 AmericanaFest is an annual event that offers six days of musical celebration through seminars, panels and networking opportunities by day and raw, intimate showcases each night. The event showcases almost 300 artists and bands throughout notable venues in Nashville. The event was held from September 10 – 15, 2019.

This year, Dutch talent was successfully introduced at AmericanaFest! Ilse DeLange, Judy Blank, and the Dawn Brothers each had their own performances on various dates and locations throughout the event. Keep reading this post for a recap of their week at AmericanaFest, including photos and videos of their performances, and to learn more about the artists and their latest work.

On the 10th of September, prior to her AmericanaFest performance that later that day, Ilse DeLange held a speech about Dutch Americana music and her personal experience and career in Nashville. Additionally, Ilse DeLange and Judy Blank both performed for music industry professionals at Ocean Way Studios. Later that evening, Ilse DeLange performed at Mercy Lounge, as part of the AmericanaFest event, where she played several songs, including “Calm After the Storm” and her song “Gravel & Dust” from her new album Gravel & Dust (more about her new album below).

The Dawn Brothers also performed at various locations during AmericanaFest and had two additional shows in Tennessee during that week. Below are photos of them in Nashville and performing at the Basement East for AmericanaFest.

Judy Blank performed at multiple locations during AmericanaFest, performed for several local radio stations and is still touring the US (for more information about her US Tour, read our previous post on Judy Blank).

In conclusion, AmericanaFest was a great success for the Dutch participants. See you next year, Nashville! 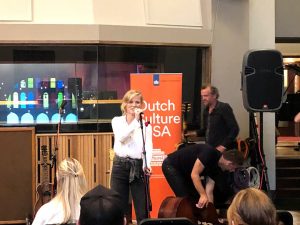 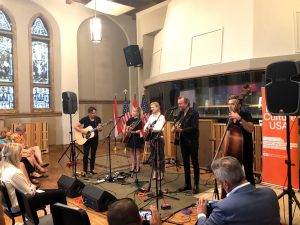 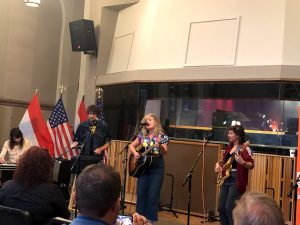 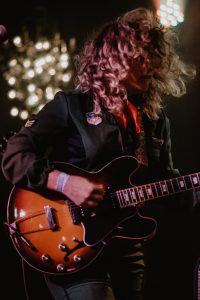 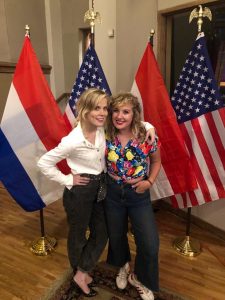 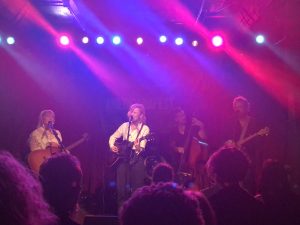 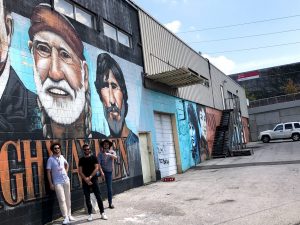 The Dawn Brothers in front of Mural of Inspiration in Nashville, TN 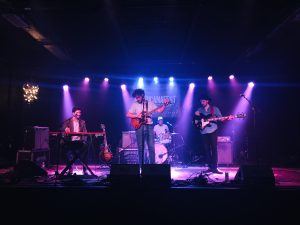 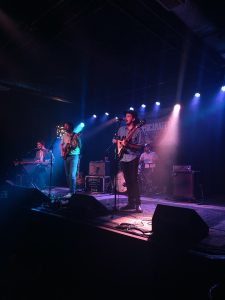 Ilse DeLange is a Dutch country and Americana singer-songwriter. Her new album “Gravel & Dust” has been released recently. The album was produced by T-Bone Burnett, a musician and producer who holds thirteen Grammy’s to his name. On the wonderful and subdued “Gravel & Dust” Burnett has captured the introverted side of Ilse DeLange in all its purity. 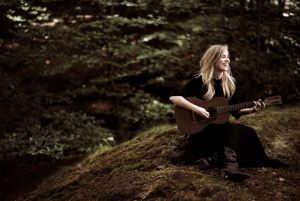 “Ilse DeLange knows you should probably never meet your heroes.
She also knows that sometimes it could be better if you do.
In that case, the best option is actually working with them.”

T-Bone Burnett is his name. He is a musician, a songwriter and probably one of the world’s most instantly recognizable and truly authentic producers. A whopping thirteen Grammy Awards stand proudly on his mantelpiece. At least two of these Burnett has won for work on albums that Dutch singer-songwriter Ilse DeLange has literally worn out. The ‘O Brother, Where Art Thou?’ soundtrack from 2000 for instance, one of those rare albums that has managed to introduce a whole new generation of music lovers to the richness of country, blues, bluegrass and folk music. And there is the 2009 Album Of The Year winner ‘Raising Sand’, by rock legend Robert Plant and country singer Alison Krauss. Produced by T-Bone Burnet, who also played guitar on the album. The list of artists Burnett has worked with is endless. From Roy Orbison and Elton John to Elvis Costello… and now an artist from the Netherlands has been added: Ilse DeLange.

Her new ‘Gravel & Dust’ album is as much of a step forward and the rekindling an old flame for Ilse DeLange as it is a return to her roots. By working together with the man that has been an essential ingredient in all music that has inspired her debut album ‘World Of Hurt’ 21 years ago, Ilse DeLange comes full circle. “Throughout my career, I have often used his work as a reference while working in the studio,” says Ilse. “When trying to explain how I thought certain songs should sound, I would point to the Robert Plant and Alison Krauss album for instance.” It was producer Patrick Leonard, who worked with Ilse DeLange on her ‘The Great Escape’ album, that acted as an intermediary. Subsequently, Ilse wrote Burnett an e-mail, explaining their mutual love for the same kinds of music. In that very same e-mail, she told Burnett how she doesn’t quite seem to fit within a specific genre as an artist. “I’d love to sit down with you over some coffee whenever you’re in Nashville,” he replied. When they eventually met, her nerves seemed to get the better of Ilse. “I was so hyped, by the time our conversation ended I had forgotten to ask him if he wanted to produce my album!” Burnett did invite her to come along with him to the House Of Blues Studios and listen to some music together. While Burnett blazed through Nashville in his car, a frantic DeLange tried to follow his trail while simultaneously calling her boyfriend and band members. “You’ll never guess whose car I’m chasing right now!” They ended up listening to all sorts of music that morning and in that very same relaxed atmosphere work on ‘Gravel & Dust’ started a few weeks later. “By creating a studio setting where he can have total control, he’s able to remain calm throughout the entire recording process.”

The end result is more than just a collection of ten songs. It is an album in the truest sense of the word. With its atmosphere of unity, ‘Gravel & Dust’ serves as an introverted, warm love letter to a soothing musical source. Of course, this will also be released on vinyl. It sounds as if T-Bone Burnett has placed Ilse DeLange with her guitar on a stool and put one spot on her, while her musicians play in the twilight glow surrounding her. Artists so good that they don’t feel the need to prove themselves. There is not a word or note that does not need to be sung or played. No virtuosity or bravado just for the sake of it. On ‘Gravel &amp; Dust’ every chord and sentence are subservient to the sounds and vibes of subdued southern American melancholy. ‘Back to the ashes and the rust / Back to that ancient rolling storm of desire that once was us / Back to the gravel and the dust’. While at work in the studio, Ilse DeLange has secretly filmed T-Bone Burnett on her mobile phone. The footage shows a man in a studio, behind a mixing desk. Totally immersed in the music he’s listening to. His eyes are closed while the sounds of Ilse Delange and her musicians fill the room. He is listening, enjoying, and does not seem to do anything else. Literally breathing the music surrounding him. That is Burnett in a nutshell, says Ilse. “Don’t force anything, go with the flow, trust on the songs. He wanted to have everything sound as natural as possible. Layered, but basic. Using only simple chords.” Ilse laughs. “He even opposed to using strings here and there, but I wanted to add those to give the songs a somewhat cinematic scope. He is a great black and white photographer, I’m one who by nature likes to add color.

At the same time, I had fallen in love with his sound for a reason. Everything breathes, the song is always the focal point. Everything, truly everything, is about feeling. That’s exactly what you see in that phone
footage, he absorbs the music.” On the wonderful and subdued ‘Gravel & Dust’ T-Bone Burnett has captured the introverted side of Ilse DeLange in all its purity. “I like pop music. In fact, I love it. It is amazing to show my exuberance through my music. But if you look deep into my heart, you’ll see that it truly belongs to rootsy songs. Pop goes outwards, these songs go inwards. Ultimately this is the music that runs deepest through my veins. This is the music that I want to grow old with. Actually, this is the music that one can gracefully grow old with!” During her headlining show at her own annual Tuckerville festival (September 7th in
Enschede, The Netherlands) Ilse DeLange will already be playing some of the ‘Gravel & Dust’ tracks. The songs from the album will truly come to life within an intimate setting when she’ll be touring theatres during the fall of 2019. This is where Ilse Delange distinguishes herself from her much-admired producer. Where T-Bone Burnett does not feel too comfortable playing live, Ilse DeLange thrives on stage. That’s where she
belongs. 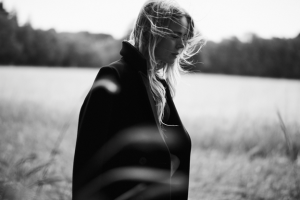 Judy Blank is a Dutch singer-songwriter whose debut album “When The Storm Hits” came out in 2014. In the following years, Blank performed at many festivals, including Lowlands, Songbird Festival, and Pinkpop. After this, Blank decided to take a different road. She travelled through the United States. Her most recent music was inspired by these travels, during which she performed in several bars and cafes throughout Louisiana and was asked to play for Louisiana’s local radio station. Blank’s new album “Morning Sun”, which features many of those songs, came out in September 2018. The album, a 70’s inspired coming-of-age confessional effortlessly mixes traditional folk and groovy Americana. From the green-eyed soul of her hit single “Mary Jane” to the jagged-edged ballad of “Tangled Up in You”, she can hit all the notes. Even living legends praise her songwriting skills; her song ‘1995’ was called a favorite by none other than Sir Elton John. It was produced by Chris Taylor (Elle King, Miranda Lambert, The Wood Brothers) in the Southern Ground Studios in Nashville. 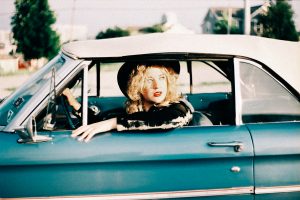 The Dawn Brothers are a Dutch band consisting of members Bas van Holt (vocals/guitar), Levi Vis (bass/vocals), Rowan de Vos (keys/vocals) and Rafael Schwiddessen (drum/vocals). The Rotterdam rockers create a vintage sound, taking musical elements of the sixties and seventies as their starting point, but turning it into their own unique, contemporary work. In their own words, they “… play the old souls from the future” (DDWD). In their first year, the band performed over 150 times on different stages throughout the Netherlands and have since been touring all over Europe. In March of 2017, they debuted with their critically acclaimed album “Stayin’ Out Late”, followed by “Classic” in October of 2018.

The Dawn Brothers released a new album on August 23, 2019. The album, “Next of Kin”, is a collaboration with the creme de la creme of Dutch Americana artists like Tim Knol en DeWolff. If you want to listen to the new album, check out the Dawn Brothers on Spotify. 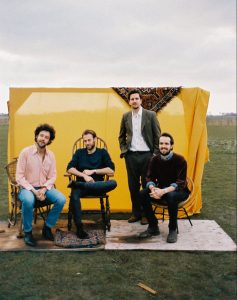