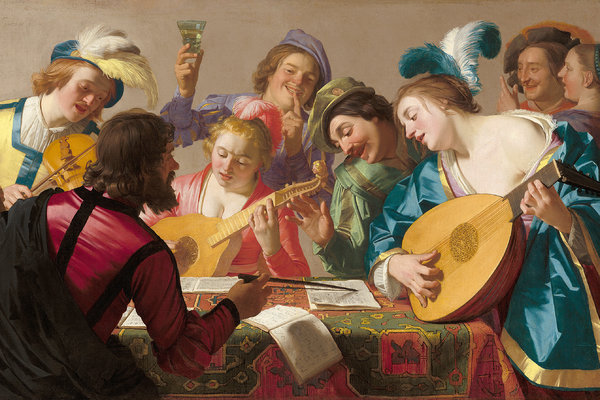 The National Gallery of Art has acquired “The Concert,” a 1623 oil by Gerrit van Honthorst, to bolster its Baroque holdings.

“The National Gallery has further enriched its collection by recently acquiring “The Concert,” a monumental 1623 painting (over 4 feet high by nearly 7 feet wide) by the great Dutch painter Gerrit van Honthorst. “We never anticipated that anything of this quality would be available,” said Mr. Wheelock, who first saw “The Concert” in a back room at Adam Williams Fine Art in Manhattan.

“The Concert” was first mentioned in a 1632 inventory of a palace in The Hague, one of several presided over by Frederick Henry, the Prince of Orange. A brightly colored canvas depicting singers and musicians in joyous harmony, “it has a wonderful dramatic flair,” Mr. Wheelock said. The style evokes early paintings by Caravaggio in which musicians are depicted at half-length against light-colored backgrounds, often gazing out at the viewer. “It makes you feel as though you’re somehow part of the party,” Mr. Wheelock said.

On Friday, “The Concert” goes on view in a special installation on the main floor of the National Gallery’s West Building, where it will remain for six months before taking its place in the adjacent Dutch and Flemish galleries.”

After training in his native Utrecht, Honthorst traveled to Italy around 1615, where he embraced Caravaggio’s theatrical style, characterized by dramatic gestures and pronounced contrasts of light and dark. As did Caravaggio, the Caravaggisti generally worked directly from posed models and brought their scenes close to the picture plane to suggest that they were an extension of everyday experiences. “Honthorst, in particular, painted with spirit and assurance, employing bright colors and strong chiaroscuro effects, painting scenes illuminated by a single light source,” said Wheelock.

When Honthorst returned to Utrecht in 1620 he was already a famous artist, and he was honored with a sumptuous feast in his native city. His enthusiastic embrace of Caravaggism had a great impact on other Dutch artists, among them Jan Lievens and Rembrandt van Rijn. His international renown also appealed to the court of Prince Maurits of Nassau in The Hague. In the early 1620s the Prince of Orange, as Maurits was known, was trying to broaden the reputation of the court by improving his residences, building gardens, presenting musical soirées, and acquiring paintings. After Maurits died in 1625, the subsequent Prince of Orange, Frederick Hendrick, continued to add to the collection to enhance the court’s international prestige.

Honthorst’s The Concert is first mentioned in a 1632 inventory of one of Frederick Hendrick’s palaces in The Hague. Although the painting may have been purchased by Prince Maurits in 1623, it may also have been a diplomatic gift to him or to Prince Frederick Hendrick from the exiled king of Bohemia, Frederick I, and his wife Elizabeth Stuart, daughter of King James I of England. The exiled royals had moved to The Hague in 1621 after Frederick’s Protestant troops were defeated by Catholic forces. Even in exile, the king and queen of Bohemia actively collected works of art and lived an extravagant lifestyle with funds partially provided by the Princes of Orange. They were great admirers of Honthorst, and he eventually became their court artist. They may have commissioned the painting and then presented it to the Dutch court in appreciation of its financial support.

“The Concert was much more than a decorative element in a courtly setting. It also had an underlying political message: harmony in society, as well as in music, exists when the guidance of its leader is followed. This adage would have been appropriate for either the Prince of Orange or King Frederick I of Bohemia,” Wheelock said.

The Concert remained in the possession of the House of Orange until it was seized by Napoleonic troops in 1795. This masterpiece, along with some 200 other Dutch paintings, was taken to France. It then entered a French private collection where it remained until acquired by the National Gallery of Art, Washington.

About the Dutch Collection

The large scale and festive character of The Concert captures the essence of Honthorst’s artistic genius, but it also reinforces the importance of Caravaggism within the Dutch collection at the National Gallery. The Concert wonderfully complements Hendrick ter Brugghen’s Bagpipe Player. Although these two masterpieces are sympathetic in subject and similar in date (1623 and 1624), they represent the differing personalities of these two great masters. Ter Brugghen’s painting is quiet and reflective and subdued in its palette, whereas Honthorst’s large multifigured composition is bright and dynamic, has powerful contrasts of light and dark, and is filled with figures engaged in momentary actions.