Watch award-winning authors Annet Schaap, Edward van de Vendel and Jef Aerts, along with translator Laura Watkinson, for a lively conversation about the joys of working with translators, Dutch cultural differences and similarities, artistic risk-taking, and what they hope young US readers will discover in their newest works. Settle in for a dynamic discussion on culture, poetry, language and imagination, moderated by Carmen Boston, Children’s Librarian, DC Public Library. The discussion was recorded on October 1st, 2020 and is available to watch through our YouTube channel.

The authors and translator will talk about their newest book publications, available in the US this fall. The event is part of the multidisciplinary focus program “Never Grow Up!” which celebrates Dutch arts and culture for young audiences throughout 2019-2020.

The following Dutch children’s books will be featured during the online event and are available to order for US readers interested in discovering new and exciting works. Click on the book title to be re-directed to the publisher’s website for (pre)order details. 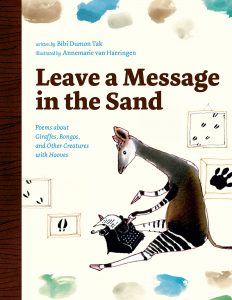 What would a boar text to a pig, a camel post on a dating site, or a goat shout from the mountaintops? In this unforgettable poetry collection, even-toed ungulates take the spotlight. Ever asked a giraffe about the clouds, read an okapi’s letter to the editor, or debated which gnu would win the race across the Serengeti? Playful poems and whimsical illustrations feature hoofed creatures from all around the world, from Siberian musk deer to African dik-diks to South American vicuñas. Weaving together humor, scientific detail, and a poignant concern for conservation, Leave a Message in the Sand introduces readers to wild creatures with even wilder things to say. 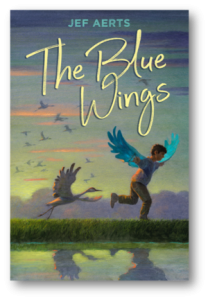 Two brothers bound together by affection and responsibility. Jadran is five years older than Josh and huge enough to be nicknamed Giant. Josh is younger, and smaller; but his sweet and stubborn brother thinks in a way that would be more typical of a small child. They are both dealing with changes to their newly blended, Muslim family. So Josh looks after Jadran and they both adjust. When the brothers find an injured young crane, Jadran wants to bring it back to their small apartment and teach it to fly at any cost. And it turns out the cost is high. Intensely moving without ever slipping into sentimentality, The Blue Wings is a warm, love-filled story about fragility, strength, and brotherhood, in all its complications.

People fear death (apparently just a tiny bit less than public speaking). We don’t know how to talk about it, especially to children, and we’re afraid to bring it up for fear of making people sadder.

Yet children, especially, have questions, and this incredibly gentle and surprisingly light story is full of both comfort and vividly imagined “answers.” The first one gives the book its title: A boy hears the voice of his sister calling him one day, a sister he’s never met because she died before he was born. The sister in the faded photograph on the wall. So that night he asks his mother what death is like and she tells him, “It’s like dreaming, only bigger.”

That’s lovely, but he still has questions, which it turns out his sister can answer! On a dreamy, carefree adventure they ride their bikes together, (not always on the ground), visiting places that were special to her when she was alive. And she talks to him in the older sister, teasing, straightforward, loving way that is exactly what he needs. (It turns out that death is not the only thing that can be Bigger Than a Dream.) Much, much more than bibliotherapy, this is a work of art that speaks with honesty and tenderness about one of life’s great mysteries. 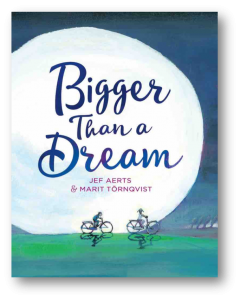 Marit Törnqvist was born in Uppsala, Sweden, and moved to the Netherlands with her family when she was five. Her illustrations of Astrid Lindgren’s work have gained her international acclaim, as has her writing. The first book she wrote, A Short Story About Love, won a Silver Pencil. 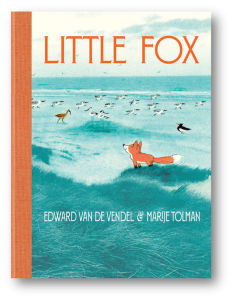 Good parents everywhere know the tension of wanting our kids to be curious, to have rich experiences and friends…but to be perfectly safe while doing it. Little Fox knows all about it! His father (in classic picture book fashion) warns him of the danger everywhere. But Little Fox still frolics with butterflies, scavenges for food, and searches for new friends. Then one day he takes a tumble, bumps his head, and starts dreaming of things that reflect both the beauty he’s seen and the scary things he’s heard. Marije Tolman’s ingenious illustrations use a fresh technique that FEELS like a movie and a dream, starring the cheerful, bright orange Little Fox on grainy mixed media landscapes of blue and green. And when Little Fox wakes up, he’s perhaps a little wiser, but still every bit as curious and full of life.

Edward van de Vendel has been a school principal, founder, and teacher. He has won many of the highest prizes for children’s literature in the Netherlands, including the Golden Kiss (an award for YA fiction), and the Silver Pencil (an award for picture books and MG). He lives in Rotterdam, and travels widely.

OF SALT AND SHORE – by Annet Schaap – Charlesbridge 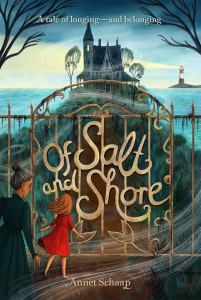 Asking herself, What if the Little Mermaid left a child behind? Annet Schaap weaves a fantastical story inspired by both the light and the dark of fairytales. As the lighthouse keeper’s daughter, Lampie must light a lantern to warn ships away from the rocks. But when a ship is wrecked, the townspeople are angry, and someone must pay. To work off her debt, Lampie is banished to the Admiral’s lonely house, where a monster is rumored to live. The terrors inside the house aren’t
quite what she thought they would be—they are even stranger. Lampie the neglected son of the admiral, a boyshe calls Fish, and after she saves him, they form a close bond.
Having been abandoned by those on land, the two children join up with other misfits, mermaids, and pirates for a daring maritime adventure. Lampie must muster the courage to fight for friendship and the freedom to be different—both on land and in the sea.

Annet Schaap is one of the Netherland’s best-loved illustrators. Her debut novel, Lampje (called Lampie and the Children of the Sea in the UK, and now Of Salt and Shore in the US), won four prizes, including the best Dutch children’s book of the year for 2018.

Laura Watkinson translates from Dutch, Italian, and German into English. Her projects range from children’s picture books to adult novels and comics. She lives in Amsterdam and founded the Dutch chapter of the Society of Children’s Book Writers and Illustrators. Watkinson’s publishers won the American Library Association Mildred L. Batchelder Award three times in four years from 2012 to 2015. Thus the Association for Library Service to Children annually recognizes the most outstanding children’s book newly published in the U.S. in English translation. All three were picture books translated from Dutch.