The website, designed by IBM, has been created to provide teachers nationwide with resources to highlight women’s experiences and contributions throughout American History.

On March 8, International Women’s Day 2019, the New-York Historical Society launched the “Women & the American Story” (WAMS) website, a free curriculum guide designed to connect educators with resources that illuminate women’s contributions to the American past. At a time when only 13 percent of the historical figures in American history textbooks are women, the site is the first comprehensive, digital women’s history resource for schools across the country. Developed in collaboration with IBM, the new site—wams.nyhistory.org—features primary sources, historical background essays, engaging biographies, and classroom activities that cover the roles women played during early encounters in American history (1492–1734) and the Progressive Era (1889–1920) with additional units to be added on an ongoing basis until it covers the full scope of U.S. history. Designed for teachers and students, the web resource is freely accessible and relevant to anyone interested in learning more about women across the spectrum of US society and history. 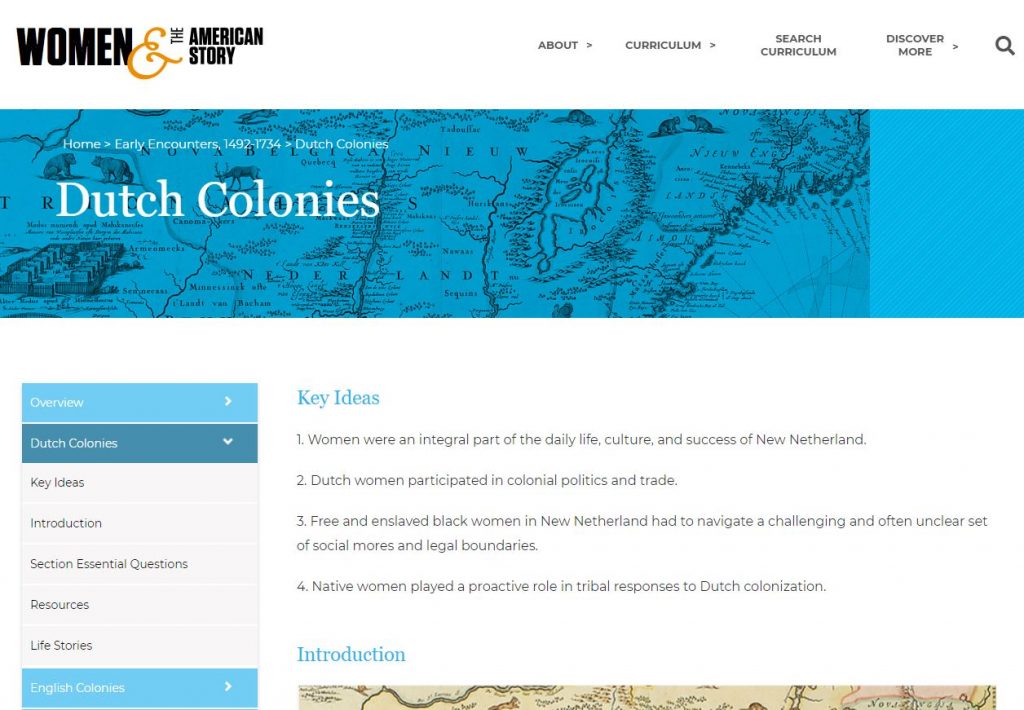 “Although scholars have made great strides in establishing the critical role that women have played over the course of American history, women are still relatively absent from textbooks and curriculum standards—bracketed but not integrated into the American historical narrative,” said Dr. Louise Mirrer, president and CEO of the New-York Historical Society.  “With its long and successful record providing professional development in American history to teachers, as well as social studies enrichment for students, New-York Historical is ideally positioned to bridge the gap between scholars’ research and classroom lesson plans, providing a rich array of resources through WAMS that will help teachers tell the important but often overlooked stories of American women and their achievements.”

“Representation matters in the social studies classroom,” said Mia Nagawiecki, New-York Historical vice president for education. “With WAMS, we are providing teachers with resources that highlight the diversity of American history—from the very beginning to today—with the hope that women will be included in instruction every day. We believe that when students see themselves reflected in the curriculum and our collective past, they better appreciate their own agency and are inspired to be engaged citizens. Including the experiences and contributions of women in the history classroom provides context and role models to today’s young women. It also communicates to students that women’s voices, actions, and opinions are valuable and fundamental to American life.”

The WAMS curriculum is an integral part of New-York Historical’s Center for Women’s History and its mission to explore and celebrate women’s central roles in U.S. history. Utilizing the curriculum’s flexible digital platform, teachers, students, and the public can access information about the myriad ways women shaped the nation’s past. Organized in chronological and thematic units that track with national curriculum standards, the curriculum—accessible online for free—provides teachers with resources that can be easily incorporated into pre-existing history lesson plans that cover the complete U.S. history survey:

The resources for Early Encounters and Modernizing America are currently available online. Two additional units will be added each fall until the project is complete in 2022, when it will span the full sweep of American history. Grounded in New-York Historical’s object-focused pedagogical approach, the curriculum connects teachers and their students to a trove of historic resources that illuminate women as history makers, and provides historical context drawn from cutting edge scholarship.

Each interactive unit will include:

These biographies are of particular importance to teachers, who report that students are best able to relate to the past through the stories of real people, while adaptable resource descriptions and suggested activities recognize that every educator, classroom, and student has different needs.

WAMS is the latest venture from New-York Historical’s Education Division. Over the last 15 years, using the Museum and Library collections, curatorial and educational expertise, and technological capacity, the Education Division has developed expansive, standards-based curriculum materials that help teachers across the country share lesser-known but vitally important histories with their classrooms—from “Slavery in New York” to “Chinese American: Exclusion/Inclusion.” The Museum’s education initiatives serve as national models for the alignment of innovative arts and humanities learning with mandated curriculum and education standards.

With the launch of the website, New-York Historical is also providing a series of programs for and the general public to bring these important, relevant stories into classrooms and living rooms. A robust menu of teacher professional learning programs this spring and summer include a program on March 9 focused on women’s work and labor at the turn of the 20th century as well as sessions on enslaved women in New York and Native American women’s responses to colonization over the summer. A three-week summer institute for teachers sponsored by the National Endowment for the Humanities will bring together teachers and historians to explore women’s roles in the American Revolution and the Civil War, during which participants will preview content in upcoming WAMS units, including “Settler Colonialism and Revolution,” due out in November 2019.

In March “What the History?!” public program series entitled “Women You Wish You’d Heard About” will feature one workshop per week, highlighting undertold stories in the first two units of WAMS: the early colonial period and the Progressive Era.

A planned podcast, presented in partnership with Columbia University Teachers College and launching at the end of March, will bring together New-York Historical educators with women’s historians and practicing teachers to discuss the importance of and strategies for effectively deploying women’s stories in the social studies classroom and the impact of inclusive curricula on today’s students.

Major support for “Women and the American Story” provided by Deutsche Bank, the Robert and Mercedes Eichholz Foundation, and the Institute of Museum and Library Services. The curriculum website and learning experience have been made possible through a grant from IBM. Additional support provided by the Consulate General of the Netherlands. Lead support for teacher programs provided by the Stavros Niarchos Foundation, with additional support from the New York City Department of Cultural Affairs in partnership with the City Council. Lead support for the scholarly programs of New-York Historical’s Center for Women’s History provided by The Andrew W. Mellon Foundation.

About the New-York Historical Society

The New-York Historical Society, one of America’s preeminent cultural institutions, is dedicated to fostering research and presenting history and art exhibitions and public programs that reveal the dynamism of history and its influence on the world of today. Founded in 1804, New-York Historical has a mission to explore the richly layered history of New York City and State and the country, and to serve as a national forum for the discussion of issues surrounding the making and meaning of history. New-York Historical is also home to one of the oldest, most distinguished libraries in the nation—and one of only 20 in the United States qualified to be a member of the Independent Research Libraries Association—the Patricia D. Klingenstein Library, which contains more than three million books, pamphlets, maps, atlases, newspapers, broadsides, music sheets, manuscripts, prints, photographs and architectural drawings.

New-York Historical’s Center for Women’s History is the first of its kind in the nation within the walls of a major museum. Its work explores the lives and legacies of women who have shaped and continue to shape the American experience. As a hub for scholarship and education, the Center demonstrates how women across the spectrum of race, class, and sexuality exercised power and effected change. Guided by a committee of distinguished historians and informed by the latest research, the Center features permanent installations, temporary exhibitions, and a vibrant array of talks and programs, enriching the cultural landscape of New York City and creating new opportunities for historical discovery.