From January 14 until February 11, Marc Foxx Gallery will exhibit ‘Nummer Zeventien: Killing time attempt one: from the deepest ocean to the highest mountain’ Guido van der Werve. In work, physical exertion and sport once more play a central role. Van der Werve’s creative language continues to develop alongside his sporting activity: since 2007 he has been competing at an international level in a number of marathons. 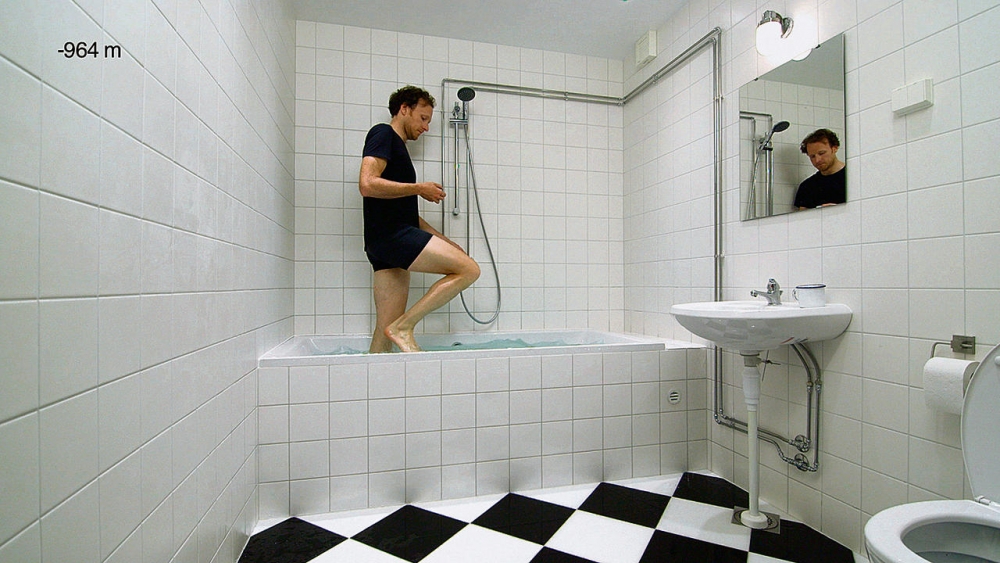 In the work presented here, van der Werve aims to emulate two extreme sporting achievements: the climbing of Mount Everest (mt. 8848) and the descent into the deepest ocean abyss 11040– two feats that contrast both starkly and ironically with the domestic surroundings chosen for the filming. In this sense Nummer zeventien is a continuation of van der Werve’s previous works Nummer dertien, emotional poverty, 2011, particularly the one entitled ‘You’re always only half a day away’ in which he performed cool down (what does that mean? I was running around the house) exercises for several hours. Compared with the conflicting sentiments that emerged previously, the nature of the sporting performance in Nummer zeventien is decidedly more psychological, as if the artist were showing that he has attained a level of greater stability, an interior equilibrium. This emerges clearly in a comparison between the feature length film Nummer veertien, home (2012) – in which the strongly autobiographical ‘house (home rather)’ was a subtitle alluding to the intention of completing a more mature, grounded work – and Nummer zeventien in which it becomes the physical space in which the action is played out, as well as the time frame of the entire piece. The ascent of Mount Everest has always been considered a metaphor for each individual’s striving to reach “the highest peak” in his or her lifetime. Here van der Werve has created his own, ‘absolute’ version of that metaphor, despoiled of the gruelling physical preparation but spatially and temporally open to the mental dimension of the action. This is an act of endurance that has been transposed into everyday life, without its tougher or more spectacular traits but still capable of confronting the viewer with the feeling that a noteworthy task has been accomplished.

Van der Werve was born in the Netherlands in 1977. He studied industrial design, archaeology, music composition, and Russian language and literature before enrolling at Amsterdam’s Rijksakademie van beeldende kunsten to study art. Although he began his career as a performance artist, van der Werve found that he preferred the aesthetic flexibility and freedom of film, which could document his actions in even the most remote sites without the need for a live audience. He has shown his works widely in Europe and the United States, where they were recently in exhibitions at the Museum of Modern Art and The Hirshhorn Museum and Sculpture Garden.