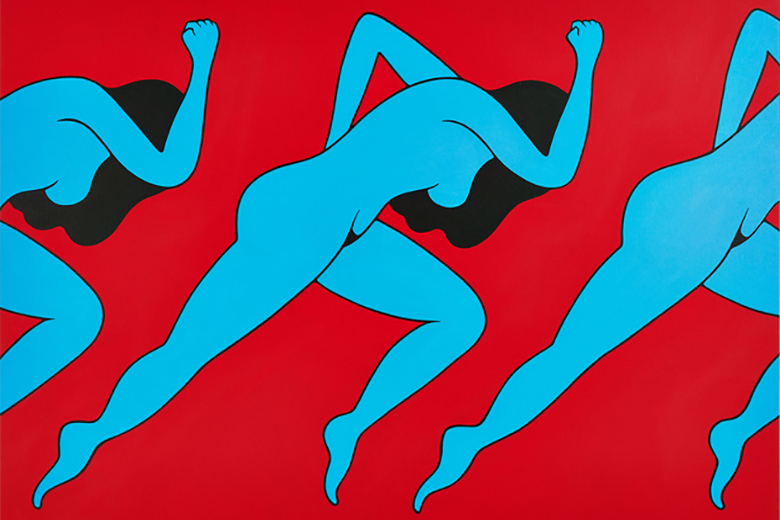 From January 7 through February 8 Dutch artist Parra's solo exhibition 'Yer So Bad' is on view at Jonathan LeVine Gallery.

Jonathan LeVine Gallery is pleased to present Yer So Bad, a series of new works by Amsterdam-based, Dutch artist Parra, in what will be his second solo exhibition at the gallery. The exhibition is on view from January 7 through February 8. In conjunction with Yer So Bad, the artist will release a limited edition zine that will be available for purchase at the gallery and Printed Matter, Inc. located at 195 Tenth Avenue.

Yer So Bad showcases a continuation of Parra’s witty and salacious post-pop imagery. Titled after the Tom Petty song, Yer So Bad, which tells the story of a girl who marries a “yuppie” and takes him for all he’s worth, this exhibition features the artist’s signature hybrid figures and freeform typography in works on canvas and paper. With an aesthetic rooted in Pop Art and the experimental graphics of the 1960s, Parra’s multi-disciplinary work spans cohesively across drawing, painting and animation.

Parra uses “the everyday and the awkward” as his source of inspiration, creating pieces that he describes as fast and freestyle. His flat compositions are accented with graphic lines and reminiscent of works by Keith Haring and Roy Lichtenstein, both of which attempted to challenge the traditional norms of painting through their depiction of popular culture. Similarly, Parra derives his content from the modern world and produces bawdy scenes that range from sarcastic and introspective, to daring and nonsensical.

The esoteric characters Parra creates are curvaceous, nude subjects with bird-like features. Portrayed in a variety of suggestive circumstances, the artist creates this provocative species with a comic-like sensibility. For his works on canvas he uses a bold color palette of highly saturated red and blue while his ink on paper drawings reinforce the graphic quality of his compositions using black and white simplicity.

Parra (Pieter Janssen) was born in 1976 in The Netherlands and is currently based in Amsterdam. The largely self-taught artist began his career drawing flyers and posters for music venues in Amsterdam in the 1990s. In 2012, he was commissioned by the San Francisco Museum of Modern Art (SFMoMA) to create Weirded Out, a 60-foot indoor mural, currently part of their permanent collection. His signature hand-drawn approach to illustration and design led to collaborations with brands such as Nike, Pendleton and Case Studyo. Parra’s paintings, drawings and sculptures have been exhibited in galleries across Europe, Japan and North America. He also co-founded the apparel label Rockwell by Parra and is a member of electronic music group Le Le.