On December 26, the University Press of Mississippi released ‘Paul Verhoeven: Interviews’ in its ‘Conversations with Filmmakers’ Series. After a robust career in the Netherlands as the country’s most successful director, Paul Verhoeven built an impressive career in the United States with such controversial blockbusters as RoboCop, Total Recall, Basic Instinct, Starship Troopers, and Showgirls before returning home to direct 2006’s Black Book. After a recent stint as a reality television judge in the Netherlands, Verhoeven returned to the big screen with his first feature film in a decade, a highly anticipated French-language production, Elle, starring Isabelle Huppert.

Verhoeven, who holds a PhD in mathematics with a concentration on the theory of relativity, boasts a fascinating background. Traversing Hollywood, the Dutch film industry, and now French filmmaking, the interviews in this volume reveal a complex, often ambiguous figure, as well as a director of immense talent. ‘Paul Verhoeven: Interviews’ covers every phase of the director’s career, beginning with six newly translated Dutch newspaper interviews dating back to 1968 and ending with a set of previously unpublished interviews dedicated to his most recent work. He experimented with crowd-sourced filmmaking for the television show The Entertainment Experience, which resulted in the film Tricked, as well as his latest feature Elle. Editor Margaret Barton-Fumo includes “Sex, Cinema and Showgirls,” a long out-of-print essay by Verhoeven on his most controversial film, accompanied by pages of original storyboards from this and some of Verhoeven’s other films. Finally, Barton-Fumo allots due attention to the director’s little-known lifelong fascination with the historical Jesus Christ. Verhoeven is the only non-theologian member of the exclusive Westar Institute and author of the book Jesus of Nazareth. 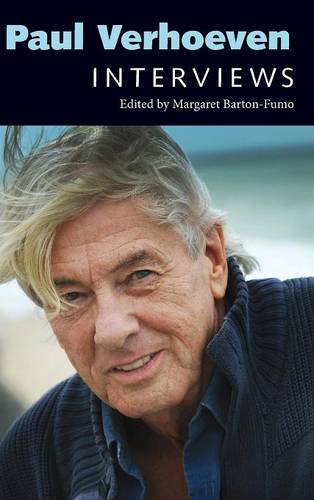 Paul Verhoeven was born in 1938 in Amsterdam. In 1955 he started studying at the University of Leiden, where he graduated from with a double degree in math and physics. He made his first documentaries when he was in the Royal Dutch Navy. He mad his TV debute in 1969, with the Dutch TV series, Floris. With the release of his popular movie Turkish Delight in 1973, Verhoeven became a well known director in the Netherlands. He went on to made films such as Soldier of Orange and The 4th Man, and eventually moved to the United States, where he directed the succesful movies RoboCop in 1987 and Total Recall in 1990. After twenty years in the United States, Verhoeven returned to the Netherlands and produced Black Book. Elle is his first French production.