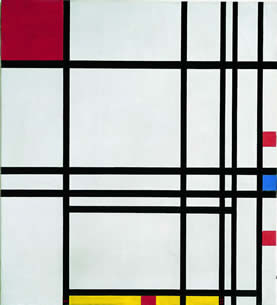 Until December 23, the Allen Memorial Art Museum of Oberlin College presents ‘Piet Mondrian: Realism and Abstraction’. The AMAM collection is known for works by artists made early in their careers. One outstanding example is Piet Mondrian’s ‘Brabant Farmyard’ , created in 1904 during the time when the artist was highly influenced by the naturalism of the nineteenth-century Dutch artists of the Hague School. Mondrian, however, is certainly best known for his later, iconic, abstract works made up of rectangular fields formed by black, white, and the primary colors red, yellow, and blue. The generous loan of Abstraction from the Kimbell Museum of Art, Fort Worth, Texas allows for museum visitors to better appreciate two distinct phases of the artist’s career. In each, Mondrian worked alongside his countrymen – at first the artists of the Hague School and later those of the De Stijl movement – while formulating his own particular approach both to realism and to abstraction.

A sense of geometry and balance is apparent in ‘Brabant Farmyard’, with its tight composition and simplified forms. The work’s pastoral subject, muted colors, and fluid brush strokes reflect the naturalistic landscape painting prevalent at the time, while the planar quality of the roofs, and the strong horizontals and verticals that demarcate earth, buildings, and sky, lend it an air of modernity. In 1912 Mondrian moved to Paris, and in the ensuing years his work became progressively more abstract. ‘Abstraction’ was started in London in 1939, where Mondrian had fled from Paris the year before, and finished in New York, where he arrived in 1940 to escape the dangers of World War II. Painted in abstract grids of straight lines and their resulting shapes, using black, white, red, yellow, and blue, the work is an expression of the “dynamic equilibrium” he sought to achieve through abstraction. 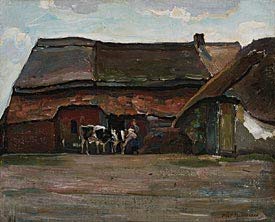