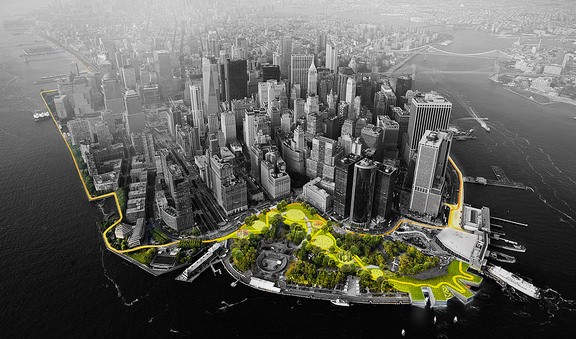 On April 3rd, Rebuild by Design’s innovative proposals to rebuild communities across the Hurricane Sandy affected region were revealed.

April 3rd was D-Day! In this case the “D” stands for Design. The ten finalist teams (elected earlier this year) had an opportunity to present their final thoughts and ideas after many months of hard work. If anything, the designs that have been put forth have given the post-Sandy momentum another boost and the expectations are that any or all of these fin al designs will make a significant contribution to the region’s resiliency planning.

The Dutch were well-represented with input in 6 of the 10 finalist teams. The Interboro team – focusing on the Long Island Coastline was loaded with Dutch expertise (Deltares, IMG Rebel, Palmbout, Bosch Slabbers, TU delft and H+N+S Landscape Architects. HasKoningDHV had partnered with Rem Koolhaas’ OMA to provide a urban waterfront solution for Hoboken, NJ. The Big “U” team – envisioning a protective waterfront around Manhattan that can be developed in many individual pieces over time, led by Bjarke Ingels, was reinforced by Mathijs Bouw and One Architecture and Arcadis. The most ambitious – both in scale as well as timeline – project came from the WXY Team (with Arcadis & West 8) – restoring barrier islands off the coast to protect the region. The New Meadowlands project enjoyed the collective minds of MIT, ZUS, Urbanisten & Deltares and analysed the region through multiple lenses, while building on existing vision plans developed in previous 50 years.

Finally, honorary Dutchman David Waggonner and the Unabridged team (including Arcadis) developed a new future for Bridgeport, CT and a potential blueprint for the future development of coastal communities everywhere.

As teams go through final presentations today and tomorrow, the jury deliberations and final announcements are expected in the course of april / may. The Dutch involvement in the process has been supported by many and the process has been lauded as a new innovative way to bring brilliant minds to the table to think about regional planning in years to come.