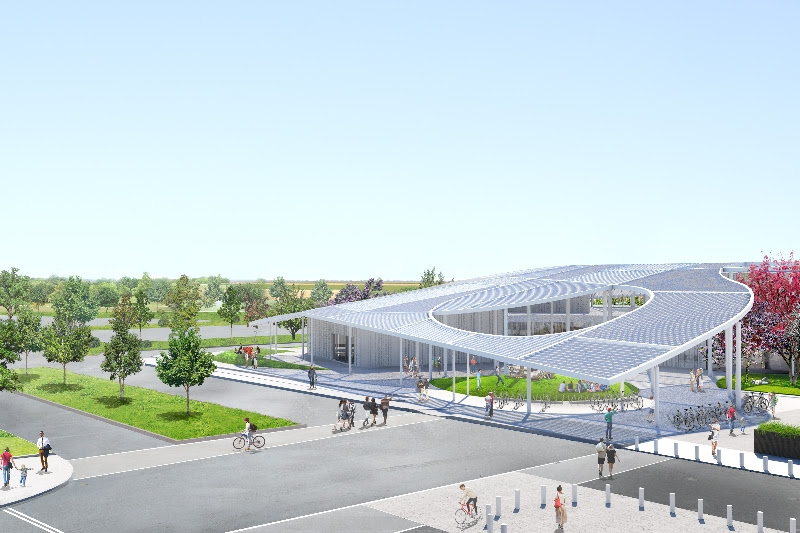 New York-based architectural design firm SO – IL announces the groundbreaking on March 1, 2014 for the new Jan Shrem and Maria Manetti Shrem Museum of Art at the University of California

New York-based architectural design firm SO – IL announces the groundbreaking on March 1, 2014 for the new Jan Shrem and Maria Manetti Shrem Museum of Art at the University of California, Davis in Davis, CA. Designed by SO – IL, in a design-build partnership with Bohlin Cywinski Jackson and Whiting-Turner, the design advances the fundamental notion of the art museum in the 21st century.

The new Shrem Museum of Art is designed to heighten an awareness of place, by combining exhibition, education, and event spaces under a 50,000 square foot smooth permeable veil, the “Grand Canopy.” The design offers a dynamic and informal portfolio of experiences, activities, and places for collaboration and reflection, both inside and outside alike. The shaded landscape created by the canopy will become a new platform for the University, a place for the active production of cultural experiences and a new symbol for the arts on campus. This forward-looking museum design conceives the art museum of the future as flexible and open; not a static shrine, but a constantly evolving public event.

“It is with enormous excitement that we break ground on the Jan Shrem and Maria Manetti Shrem Museum of Art,” said Florian Idenburg, Principal, SO – IL. “Our passion lies in making public space where people come together. It is a treat to be working on the Davis campus, and the sublime landscape of the Central Valley. The Shrem Museum is a key project for our office. We believe it captures accurately the spirit of the place and the energy of its inhabitants. We are excited to see it become a reality.”

The Shrem Museum of Art is part of SO – IL’s growing focus on work for innovative cultural institutions. Currently under construction is SO – IL’s design for a collaborative workspace for next generation thinkers and makers, NEW INC, for the New Museum of Contemporary Art in New York with Gensler. Earlier this year SO – IL, in collaboration with Architectuurstudio HH, released their design for ArtA, a new public arts center for film and visual arts along the Rhine River in the inner city of Arnhem, The Netherlands. The design was created after the team was shortlisted for the architecture competition in December 2013, along with Kengo Kuma and Associates, BIG | Bjarke Ingels Group, NL Architects, and Office for Metropolitan Architecture (OMA).

SO – IL is an idea-driven design office that brings together extensive experience from the fields of architecture, academia, and the arts. A creative catalyst involved in all scales and stages of the architectural process, SO – IL approaches projects with an intellectual and artistic rigor fueled by a strong commitment to realizing ideas in the world.

SO – IL has worked on an array of projects ranging in scale from the master plan of a cultural campus in Shanghai, China to a series of prints for the Guggenheim Museum. Projects include the flagship store for Benetton in NYC, student housing in Athens, Greece, the presence of the Frieze Art Fair in NYC, and Kukje Gallery in Seoul.

The work has received numerous awards, including the MoMAPS1 Young Architects Program, the AIA Young Practices Award and the Emerging Voices award by the Architectural League. SO – IL has been widely featured in international publications such as The New York Times, The Wall Street Journal, Fast Company and Domus, and in exhibitions at the Guggenheim Museum and the Museum of Modern Art in New York, the Los Angeles Forum for Architecture and Urbanism, Studio-X in Beijing and Kunsthal KAdE in The Netherlands.