SO-IL Working On Architectural Proposal For The Manetti Shrem Museum

Dutch company SO-IL is currently working on an architectural project for the Jan Shrem and Maria Manetti Shrem Museum of Art, in collaboration with the San Francisco office of Bohlin Cywinski Jackson. This project will be completed on November 13th. Dutch photographer Iwan Baan recently made some pictures of the work in progress, which are exposed in this article for Archpaper.

In their architectural proposal they try to capture the spirit of the California Central Valley—the sense of empowerment from being able to cultivate and grow freely—a spirit of optimism, imagination and invention. As an overarching move, we propose a 50,000 square-foot permeable cover—a ‘Grand Canopy’—over both site and building. The distinct shape of this open roof presents a new symbol for the campus. The Canopy extends over the site, blurring its edges, and creating a sensory landscape of activities and scales. Like the Central Valley, the landscape under the Canopy becomes shaped and activated by changing light and seasons. Its unique form engenders curiosity from a distance, like a lone hill on a skyline. 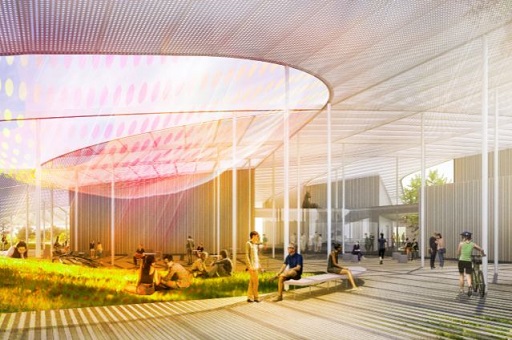 SO–IL is an award winning architectural design firm that envisions spaces for culture, learning and innovation. From their offices in New York, SO–IL partakes in the production of buildings, interiors, furniture and landscapes around the world. As a collective of diverse thinkers and makers, the office engages with the ever changing social, economic and natural environment through active dialogue that considers context, function, and opportunity. SO–IL believes that physical structures have the power to offer a sense of wonder and place. They serve as platforms of exchange, and create generous, sensorial and visceral experiences.

Florian Idenburg is a Dutch architect and co-founder of the award-winning architectural design firm SO-IL in New York City. Idenburg studied architecture at the Delft University of Technology in the Netherlands, receiving a master’s degree in 1999. From 2000 to 2007, Idenburg served as Associate at SANAA, where he was in charge of the design and realization of two internationally acclaimed museums.

About the Shrem Museum

Born of a distinctive legacy, the Manetti Shrem Museum is committed to the interdisciplinary experimentation that makes UC Davis a leading university. The museum’s dedication to impactful education is evident in every aspect, from programming to architecture. On November 13, 2016, the museum opens as a fulfillment of UC Davis’ rich legacy of education and innovation. The museum has taken shape because of the incredible support of the UC Davis community.