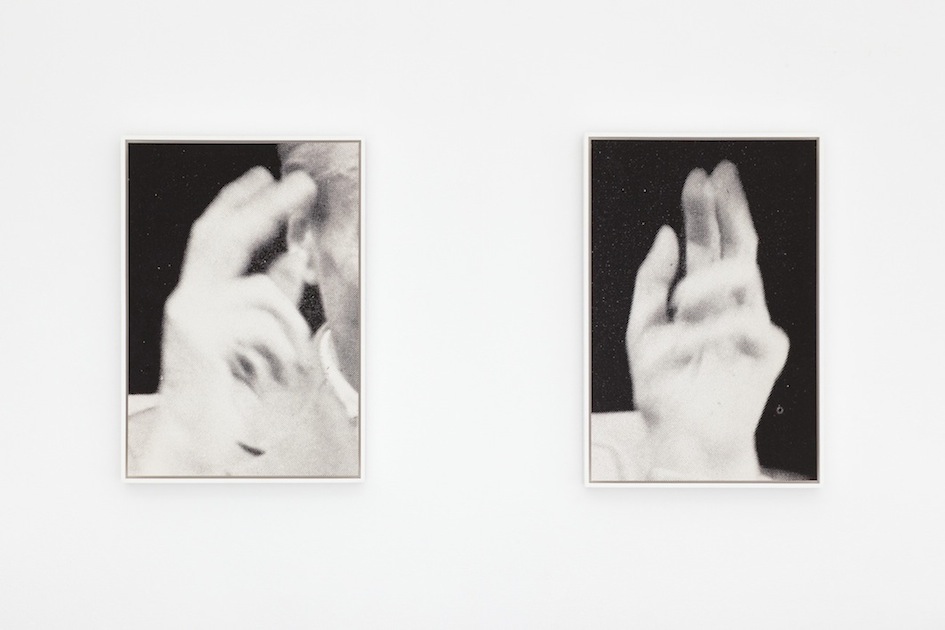 “In order to read what has never been written, look deeply onto a blank wall, an obscured face or a glimpse of human form. Every perception is fertile with meaning–even a perceived absence provokes a search for a hidden piece or illusory presence. Images of two hands, hung closely apart, will guide the eyes towards the unseen arms of the body that binds them together. While a keyboard spacebar inputs distances between characters, this spacing also unifies words in the structure of a sentence. Legibility is found in the perception of what is real, what is present and what is possible.”

In this new series of work, Dicke interrogates the language of visual culture through breaks, spaces and intervals of absence. Each item used by the artist is a quotation of an existing structure, an artifact of a previous visual or material identity culled from print media, archived photography or found studio materials. Dicke’s work interrogates these existing visual mediums through sandpaper abrasions, selective framing, cropping and other deviations.

Expanding on her “corrected artwork” series, Dicke’s new body of work introduces pairings between similar formal elements taken from varying sources and materials. A pair of crossed women’s legs echo one another in two photographs, yet are differentiated by each figure’s skin tone and background color—black and white become inverted notions. Another pairing shows two sets of hands gesturing at a quotation mark, but are subtracted from the male figure lurking invisibly between the frames. Dicke’sSplit Self is composed of two images that remove the center of a female face, yet, through this removal, open up her identity to an infinite number of possibilities. A further elaboration of the unwritten is explored in two mosaics of meticulously arranged crayons.

In rooting her work between the threshold of presence and possibility, Amie Dicke actively engages in the sequences and contingencies that structure visual language and human perception.

Amie Dicke (b. 1978) lives and works in Amsterdam, Netherlands. She received her masters at the Willem de Kooning Academy of Fine Arts in Rotterdam. Dicke has shown internationally at galleries and institutions including the Gemeente Museum, The Hague, Stigter van Doesburg and Castrum Peregrini, Amsterdam, Peres Projects, Berlin and Hiromi Yoshii Gallery, Tokyo. Her work is included in collections including Gemeentemuseum The Hague, Collection Rob Defares, Direct Art Collection, the Zabludowicz Collection, Collection Rik Reinking, Takashi Murakami and the City Collection of Rotterdam through the Museum Boijmans van Beuningen. Upcoming exhibitions include her solo show Important Souvnirs at Looiersgracht 60, Amsterdam.

Anat Ebgi Gallery was founded in 2012 as a platform to promote the work of young artists based in the Los Angeles area. The gallery has since grown to encompass an international roster of emerging talents that embrace new, distinct forms of production across a wide array of mediums. Represented artists have shown work at MoMA, the KW Institute for Contemporary Art, the Palais de Tokyo and the Seattle Art Museum. Works by gallery artists are part of the collections of MoMA, the Julia Stoschek Sammlung and the Yale University Art Collection. The gallery has participated in fairs including NADA, The Armory, (OFF)IFICIELLE, Miart and Art Los Angeles Contemporary.