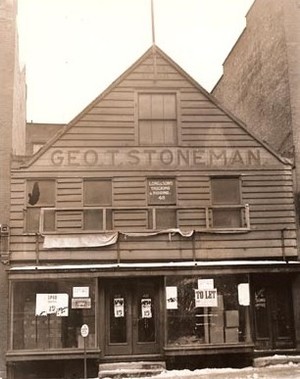 “This Place Matters” Project includes the creation of graphic, fabric “scrims,” installed on 48 Hudson’s north and east facades. The official opening will be announced soon.

The “This Place Matters” Project includes the creation of graphic, fabric “scrims,” installed on 48 Hudson’s north and east facades. Working together, preservation architects, historians, and artists designed the north scrim to depict the building’s north side in trompe l’oeil, as it likely appeared when it was constructed, ca. 1728. The east scrim will be a large sign that will call attention to 48 Hudson from the eastern view in historic Downtown Albany. The purpose of the “This Place Matters” Project is to attract support for the stabilization and restoration of 48 Hudson. The friendship between Dutch Culture USA and several local cultural institutions aims to make New York’s Dutch heritage accessible to the public, promote international exchange between artists and organizations, and offer opportunities for educational exchange.

Historic Albany recently acquired the Van Ostrande-Radliff House at 48 Hudson Avenue in Albany, New York.  Built in 1728, it is documented to be the oldest surviving building in the city. It has been vacant since the 1990’s and is in immediate need of roof repairs. Water was cascading through the east wall through a leak in the roof and is causing substantial damage to this precious resource. Historic Albany launched a 30-day Indiegogo crowdfunding campaign in August 2013 to raise $10,000 for critical repairs to the roof and met their goal in 22 days.

The Van Ostrande-Radliff House is one of only a handful of North American urban Dutch houses to survive into the twenty-first century, but even greater rarities exist within its construction. The modified anchor beam framing for the side jambless fireplace is the only surviving example of this construction type in the United States, and represents a type of construction that was common in both New York City and Albany throughout most of the period of Dutch cultural dominance. In addition, the molded anchor beam that adorns the front of the building is one of only two in this country to survive in situ. Additional material of particular importance and extreme rarity include the original un-tapered weather board siding, which exists on the west side of the building, and survives in much the same condition as it did when the neighboring structure was built in the early years of the nineteenth century.

The Van Ostrande-Radliff House was built in 1728 during Albany’s culturally Dutch period beginning in 1624 that extended long after the official end of Dutch rule in the region in 1664. The house’s date of construction has been ascertained through documentary sources and corroborated by tree ring dating, or dendrochronology, performed on its framing members. Careful inspection of the building, coupled with its canted front wall, built to conform to Albany’s meandering post-medieval street pattern, leave little doubt that the Van Ostrande-Radliff House was originally built on its current site outside of the stockade as it then existed.

While it is not known exactly how the Van Ostrande-Radliff House appeared during the Dutch cultural period, it is known that the first substantial alteration to the exterior of the house was an enlargement that occurred after the Revolution around 1790. These modifications coincided, as is typical, with the marriage of one of its occupants.

It was at a time of great change in the region, that Albanian Jared Holt purchased the then 100-year-old Van Ostrande-Radliff House and moved his residence there in 1835. Two years later, Holt moved his wax-making business there from another location nearby, and enlarged his new building around 1838 with a masonry wing for his manufacturing process added to the south. This company, which lasted into the 1990s, specialized early on, in making stitching wax to sell to shoe makers in the immediate vicinity. The company left the Van Ostrande-Radliff House in 1892 to another location just outside the core of the city.

In 1848, a substantial area of the Albany riverfront was wiped out in a fire, but 48 Hudson was spared. After the departure of Holt’s company in 1892, a variety of commercial establishments were housed in this building, and in 1935, the building was sold to members of the Saul family, who operated a restaurant supply store in the building until the 1990s, at which time it became vacant.  Historic Albany Foundation acquired the building in June 2013.

The official opening will be announced soon.