From January 12 until February 11, Dutch painter Toon Kuijpers presents recent paintings in ‘Still Life: Homage to Vincent’ at the Howard Scott Gallery. This exhibition was inspired by Vincent van Gogh’s Irises and Roses paintings at the Metropolitan Museum, New York exhibited in 2015. Toon Kuijpers’ paintings are structural in a manner to equate the flat tabletop site of traditional still life painting with not only the considerably more vast space of depicted landscape, but also with the rectilinear field of abstract canvas. The ephemeral and the eternal touch in his paintings. This places Kuijpers’ work firmly within the heroic tradition of modern art that originated with the achievements of the impressionists. The enduring images are lineage and relevance of this realist tradition includes Kuijpers’ own Dutch heritage. His distinctly modern paintings hearken back to Dutch artists’ traditional efforts to connect physical and metaphysical concerns. Kuijpers paintings are part of a historical chain that stretches back through Vincent van Gogh (which Kuijpers in this exhibition brings a still life homage) to the Seventeenth-century masters. Like many of the grand Dutch precedents, Kuijpers’ art attempts to honor injunction to “distill the eternal from the transitory”. His curious and very individual approach to color remains a distinctive aspect of the work. In these new paintings, his affection for a realm of grays interspersed with a range of earth tonalities (extending into deep browns) is evident. Smokey blues of medium and darker values dominate several paintings. 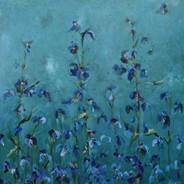 Toon Kuijpers’ works are in many private and public collections in the United States and Europe including IBM (NY), the Prudential Insurance Company of America (NY), Phillips Research Eindhoven, Gemeente Museum Den Haag, and The Netherlands Rijksmuseum Twenthe.