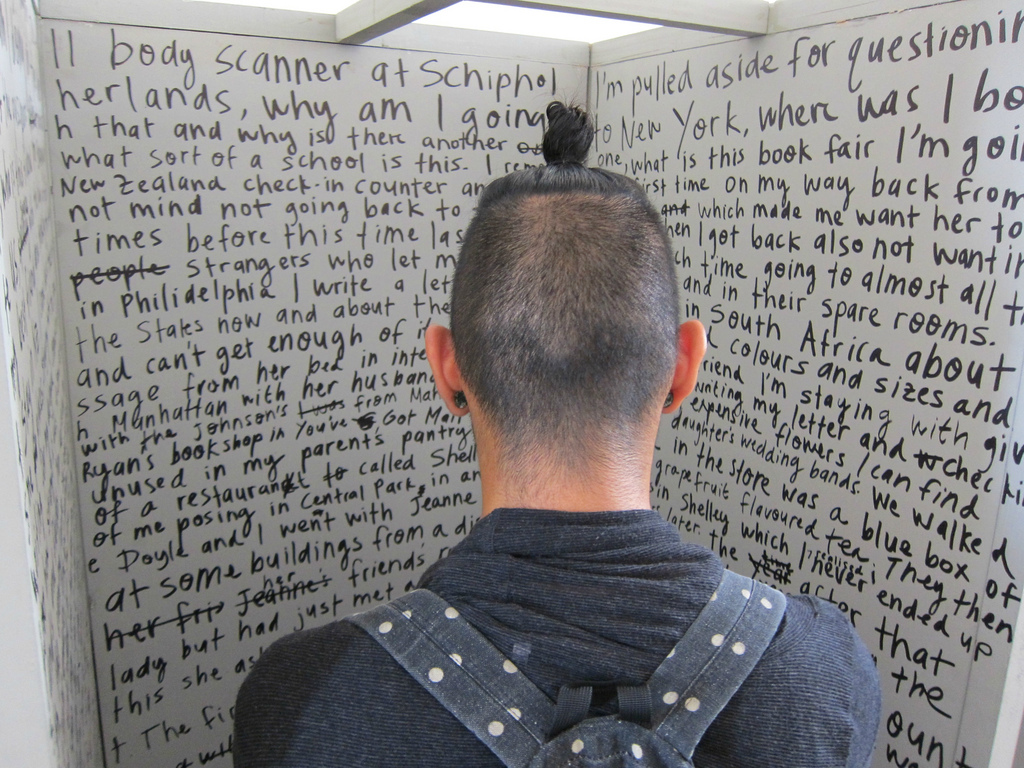 The eighth annual NY Art Book Fair takes place at MoMA PS1, Long Island City, Queens. Various Dutch publishers are exhibiting at the fair, which is free and open to the public.

The eighth annual NY Art Book Fair takes place from September 20 to 22, at MoMA PS1, Long Island City, Queens. Various Dutch publishers are exhibiting at the fair, which is free and open to the public.

The NY Art Book Fair is the world’s premier event for artists’ books, catalogs, monographs, periodicals, and zines. Last year, the fair featured 283 booksellers, antiquarians, artists, and independent publishers from twenty-six countries, and was attended by more than 25,000 people.

Werkplaats Typografie, a fair favorite, presents a collaborative project by its student body for the fifth year running. The Dutch school, brings its entire student body to design, produce, and sell books while you watch.

This year the Werkplaats Typografie’s contribution to the Fair begins with the display of an object that is an integral part of the offset printing process. This object is rarely seen by the public (and even the designer) because it doesn’t need to be. It is an in-between object that hosts an uncompleted image – usually a recording from a digital file – towards its final destination as printed matter. This object is a Computer To Plate [CTP] printing plate. Each student of the Werkplaats Typografie will display a CTP plate produced by Drukkerij Raddraaier, a printing shop set up during the Amsterdam squatters movement in the late 70s. During the fair the students will explore and make use of the surroundings and resources of New York City to ‘print’ or ‘realise’ the content of their plate.

11:30 am–12:30 pm
Signing of Sources in the Air by artist David Maljkovic and designers Armand Mevis & Linda van Deursen. Presented by JRP|Ringier and Metro Pictures.

4:00-5:00 pm
Storytelling with vernacular photographs, by Erik Kessels
Over a period of 10 years Erik Kessels has made many books out of the passion for vernacular and amateur photography. He will highlight his latest publications and give an insight in collecting and editing the photographs often found online or on flea markets from all over the world. Another subject of the lecture is the role of images in the time we live in and how you can look at these in other ways than simply consuming them. Presented by KesselsKramer.

5:00 pm, Erik Kessels from KesselsKramer with be launching and signing copies of Useful Photography #011. Presented by Printed Matter, Inc.

7:30 – 8:30pm, Q51 Signing of The Lost Cent by Serge Onnen, Launch of Who told you so?! accompanied by Freek Lomme. Presented by Onomatopee.

5:00-6:00 pm
WdW Review
Billie Holiday once made a simple, yet prescient observation: when she was coming off drugs, she didn’t like to watch television. Although this could be seen as a passing comment, such an association ties imagery to narcotics as twinned devices that can both stimulate and anesthetize. Building off such a conflicted prescription, WdWReview (wdwreview.org) continually tasks various writers to dig deep into the means and ways of mediating vision. Join Chief Editor Adam Kleinman, writer Kate Zambreno and another mystery guest for a public elicitation drawing imagery from images. WdW Review is a new online platform organized around several international Desks; a series of framed debates; critical essays, and speculative image readings, published by Witte de With Center for Contemporary Art.

brings its entire student body to design, produce, and sell books while you watch.

brings its entire student body to design, produce, and sell books while you watch.

The following other Dutch exhibitors will be present at this years art fair:

For more info on events during the fair to go: http://nyartbookfair.com/events