Vermeer and the Masters of Genre Painting: Inspiration and Rivalry

From October 22 through January 21, there will be an exhibition on Vermeer at the National Gallery of Art in Washington

From October 22 through January 21, there will be an exhibition on Vermeer, “Vermeer and the Masters of Genre Painting: Inspiration and Rivalry”, at the National Gallery of Art in Washington.

This landmark exhibition examines the artistic exchanges among Johannes Vermeer and his contemporaries from 1650 to 1675, when they reached the height of their technical ability and mastery of depictions of domestic life. The exhibition brings together some 65 works by Vermeer and his fellow painters of the Dutch Golden Age, including Gerard ter Borch, Gerrit Dou, Pieter de Hooch, Gabriel Metsu, Frans van Mieris, Caspar Netscher, and Jan Steen. Juxtaposing paintings related by theme, composition, and technique, the exhibition explores how these artists inspired, rivaled, surpassed, and pushed each other to greater artistic achievement. The paintings also reflect how these masters responded to the changing artistic climate of the Dutch Republic in the third quarter of the 17th century, particularly in Amsterdam, Delft, Leiden, and The Hague. The exhibition features 10 paintings by Vermeer (many of which have not been seen in the United States since the Gallery’s legendary 1995–1996 exhibition Johannes Vermeer), including The Lacemaker (c. 1669–1670, Musée du Louvre, Paris) and The Love Letter (c. 1669–1670, Rijksmuseum, Amsterdam). A fully illustrated catalog features essays by the curators and essays and entries by a team of international scholars. 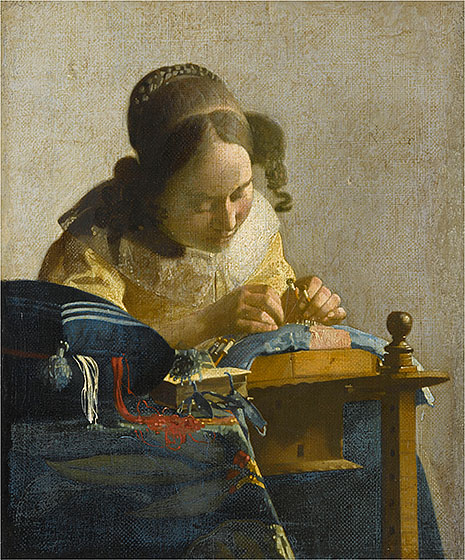 Dutch Burghers and their Wine: Nary a Sour Grape
November 14 at 2:00
West Building Lecture Hall

Virtuous Rivalry in the Age of Vermeer
December 12 at 2:00
West Building Lecture Hall

Johannes Vermeer: An Artist of His Time Yet Timeless
January 7 at 2:00
East Building Auditorium

Shown in conjunction with the exhibition Vermeer and the Masters of Genre Painting: Inspiration and Rivalry, Vermeer, Beyond Time focuses on the artist’s family life, his artistic contemporaries, his conversion to Catholicism, and the wider world of the seventeenth-century Dutch Golden Age. The filmmakers explore specific paintings, looking for what has come to be known as the Vermeer style: the representation of light, the interplay of color, and the effects of perspective across the same themes, places, and objects. (Jean-Pierre Cottet and Guillaume Cottet, 2017, 86 minutes)