The Philadelphia Museum of Art will host the exhibition through January 22, 2017

The Philadelphia Museum of Art celebrates West and Central African fashion and culture in an exhibition exploring the classic and contemporary looks of Vlisco, the oldest international textile brand that specializes in Dutch wax fabrics. From the earliest designs and most recognizable patterns, continuing through a selection of iconic styles that have been re-interpreted in a contemporary way, the exhibition will highlight a selection of the thousands of patterns Vlisco has produced for the African and diaspora markets. The exhibition will run through January 22, 2017. 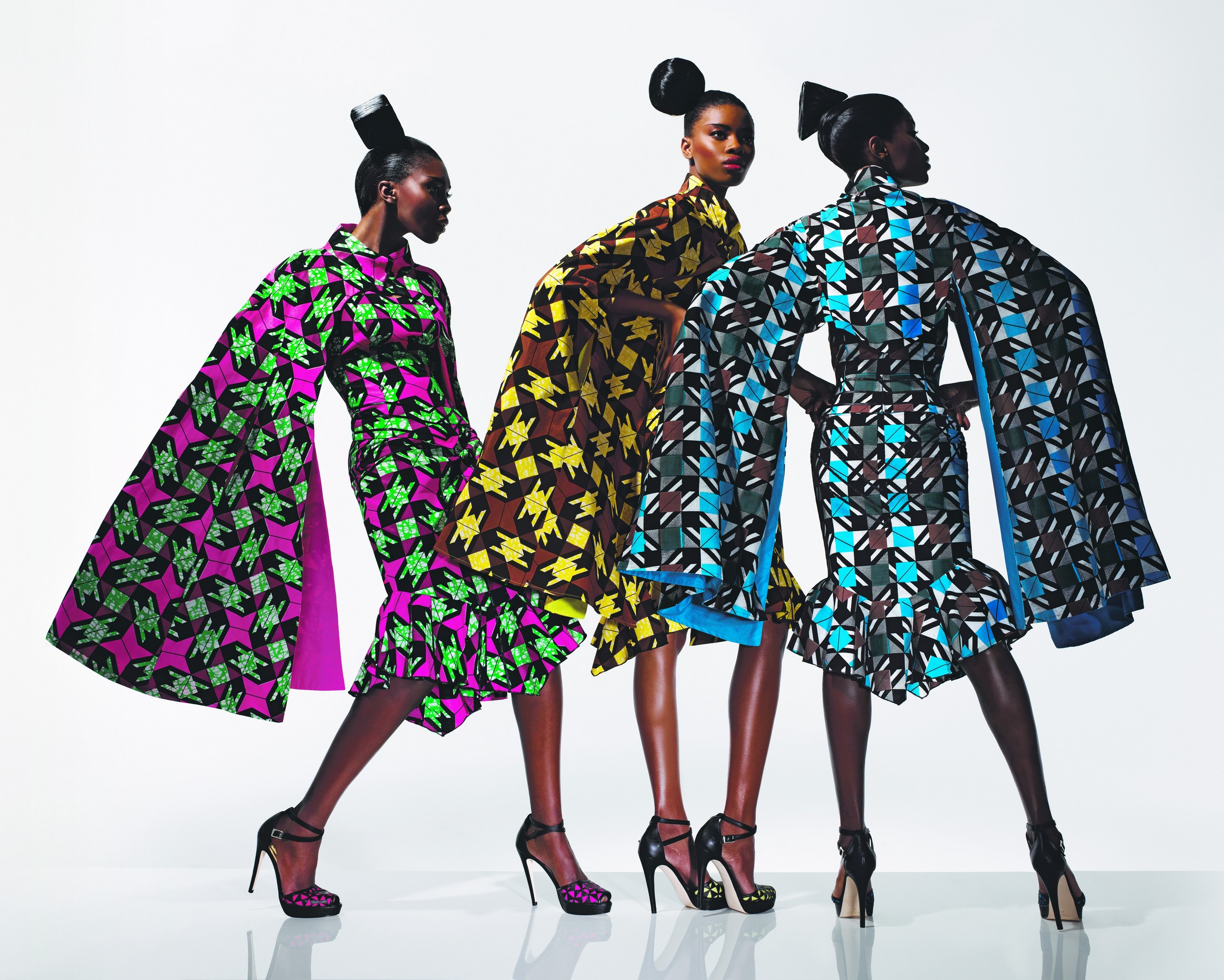 Vlisco, founded in 1846, began exporting factory printed cloth to West Africa around 1876. Over the years Vlisco absorbed several Dutch textile manufacturers that also produced wax prints for the market prior to World War I. Today it is the last surviving European wax-resist textile manufacturer. The Vlisco brand is manufactured in Helmond, Netherlands and is the premier brand of the Vlisco group which includes three other brands, GTP and Woodin made in Ghana and Uniwax produced in Cote d’Ivoire. Each brand caters to a distinct segment of the market.

When cloth leaves the factory it is generally identified only by a stock number. The women who trade in the open-air markets in African cities, and their customers, assign the patterns names inspired by current events, politics, religion, and material culture. The exhibition explores the ways in which such patterns acquire social meaning, status, and value and become culturally assimilated into African society, and examine how designs can have many interpretations depending on where they are used. 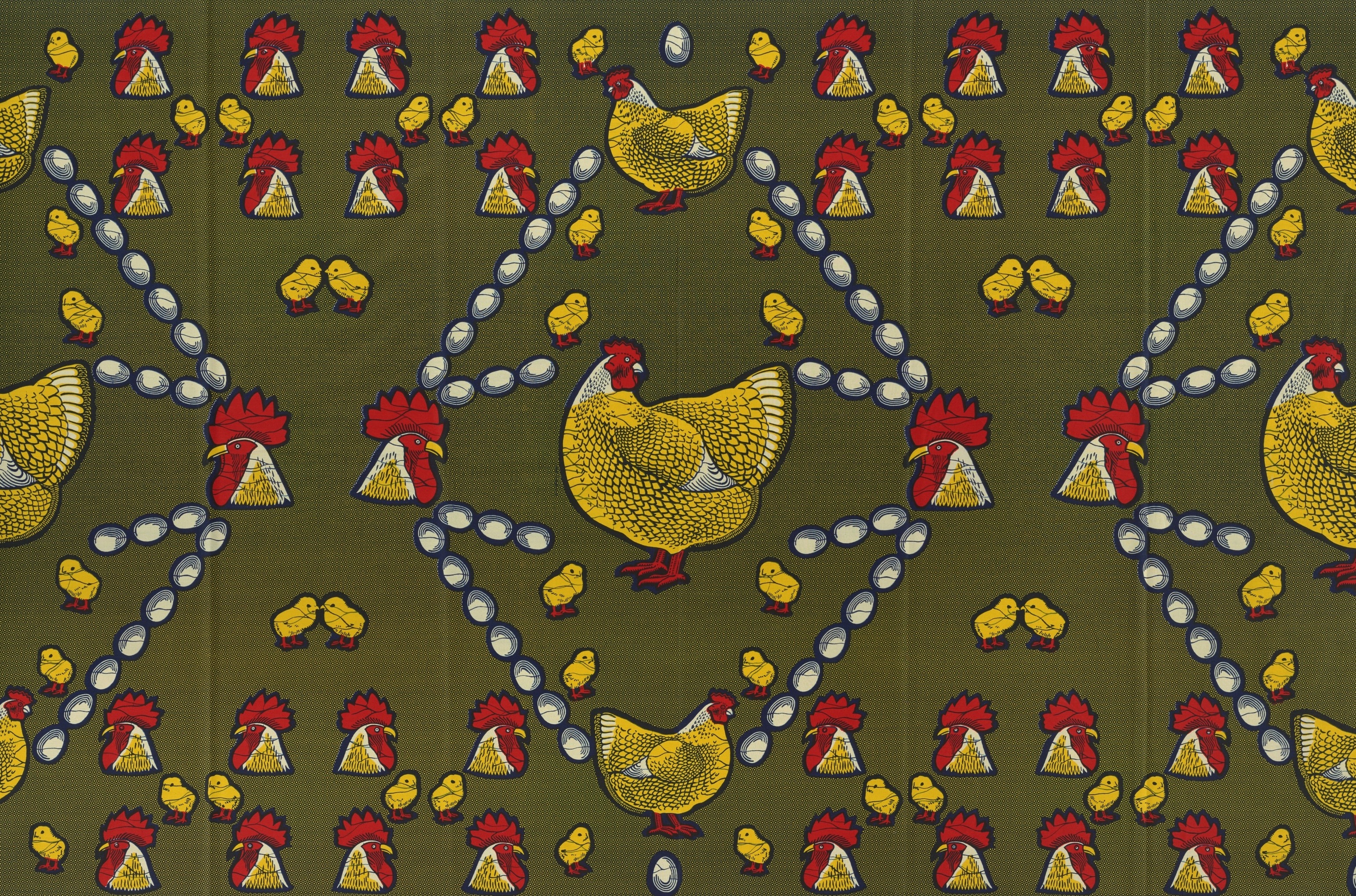 Among the classic patterns represented are the “Happy Family” egg motif, featuring an image of a hen surrounded by her chicks and chicks-to-be referencing the importance of family, and the “Fallen Tree” pattern that acts as a visual substitute for a proverb that teaches unity and strength in Ghana. The “Alphabet” design symbolizes the value that Africans place on education, and “Swallows”, a symbol of good luck, refers to the transience of riches. The classic “Swallows” pattern was worn by flight attendants for Air Afrique in the 1970s. The display will show how this particular pattern has been reinterpreted to include airplane imagery, a symbol of globalization. 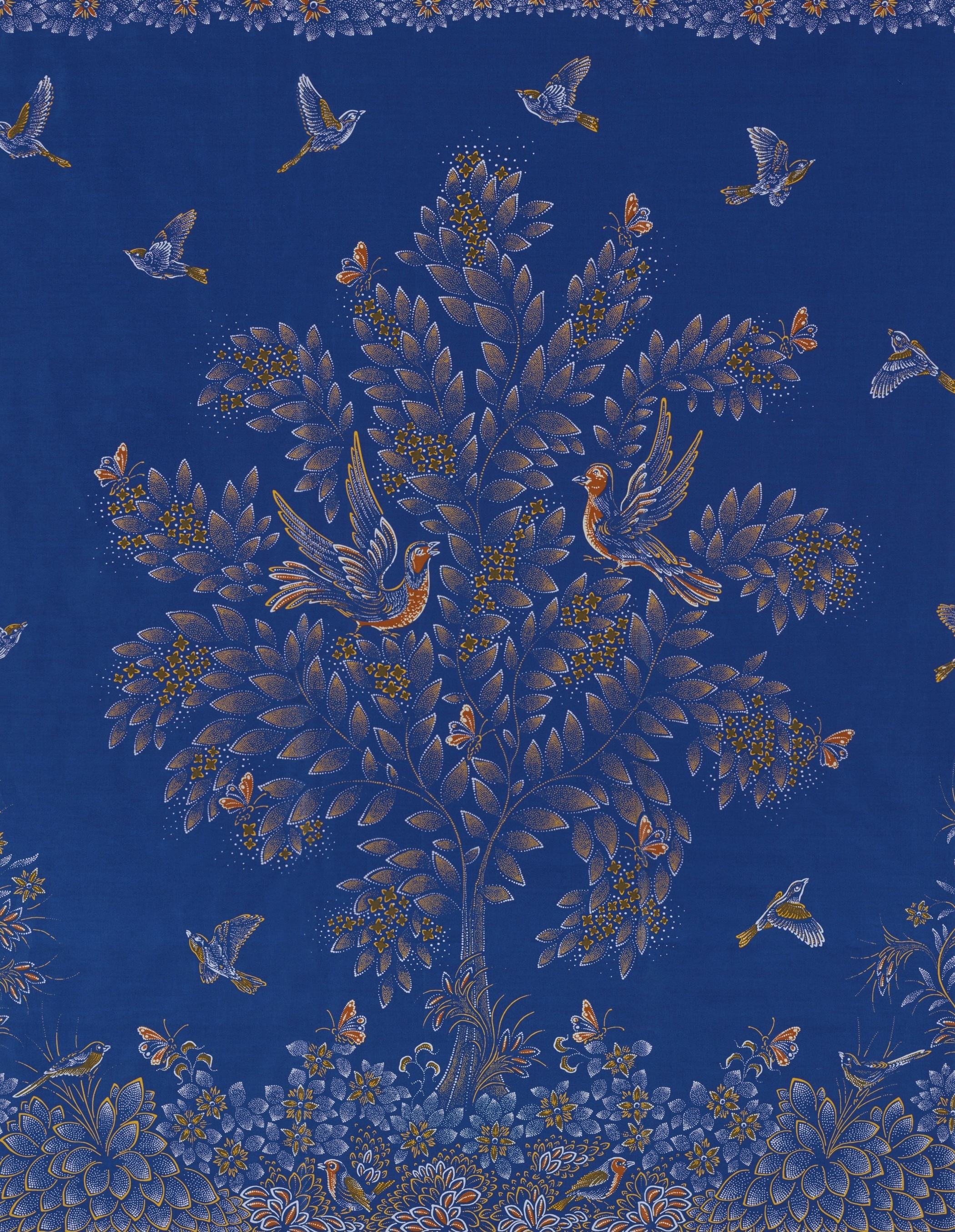 The exhibition will touch upon the rise of the most successful market women in Togo, called the Nana Benz, who traded in wax prints beginning in the 1930s. The Nana Benz were essential to the success or failure of the designs.  Wholesalers to other market traders, the women provided Vlisco agents with information on customer preferences. In return, the women were often given exclusive access to certain designs.  A playful design featuring the Mercedes-Benz three-pointed star logo pays homage to these traders, as this was their car of choice and became a symbol of their success.  In another design, the Vlisco logo on the radiator grill replaces the car’s original trademark. 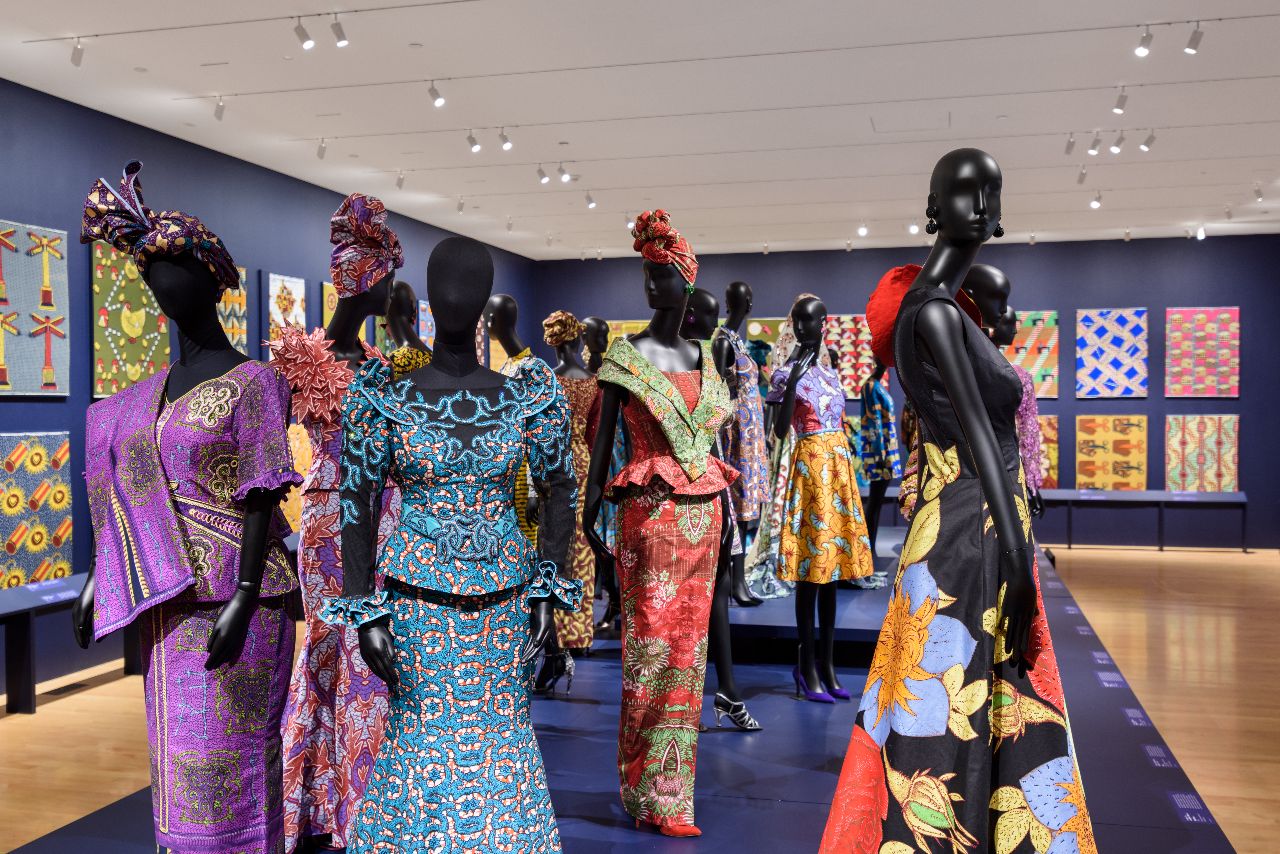 Displayed on mannequins in the center of the gallery is an installation of contemporary designs using the wax fabrics as created by African, diaspora and other international designers.

The exhibition features ensembles by Vlisco’s senior fashion designer from 2008 to 2016, Inge van Lierop, who was responsible for translating each seasonal concept into stylish ensembles used for marketing. A strapless, two-piece wedding dress made from two color ways of the same design is embellished with beads, as is the veil, which was embroidered in India. Deconstructed and made into a late 1960s-style mini dress that pays homage to the decade when the design first achieved popularity, the classic “Angelina” pattern associated with the dashiki —a loose tunic worn by men and women— is updated and re-colored in luminous pastels for a more contemporary look. 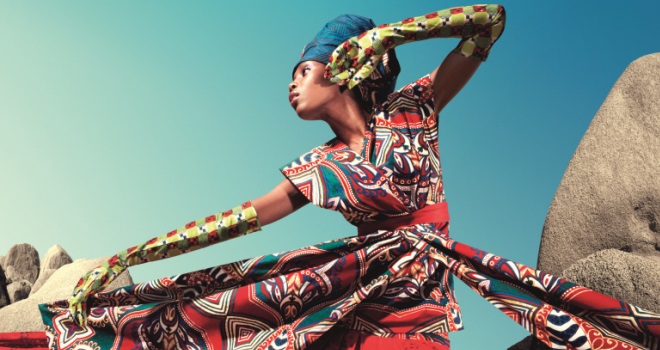 The fashions of Manish Arora, one of today’s most inspiring designers, fuse his Indian roots, global style, and contemporary popular culture.  This year, Arora has collaborated with Vlisco for his ready-to-wear collection shown recently in Paris and inspired by the American West.  For his ensemble on display, he has re-interpreted wax prints into knit fabrics.

Ikiré Jones of Philadelphia, led by Nigerian-American menswear designer, Walé Oyéjidé, shows how the designs can be creatively cut and mixed together for unique looks.  His  hand-tailored trousers, and a jacket made of Vlisco fabric, are accessorized with a storytelling scarf.