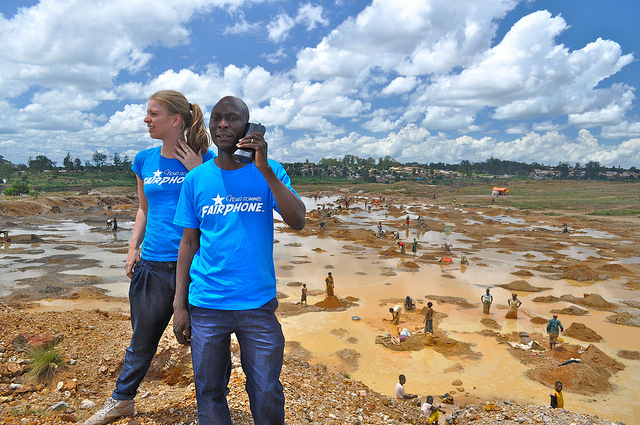 Let’s bring Fairphone to the US and vote today for CEO Bas van Abel to talk at SXSW 2016.

Fairphone is a social enterprise that is building a movement for fairer electronics. By making a phone, they’re opening up the supply chain and creating new relationships between people and their products. They’re making a positive impact across the value chain in mining, design, manufacturing and life cycle, while expanding the market for products that put ethical values first. Together with their community, they’re changing the way products are made.

One of the main areas where Fairphone aims to create social impact is design:

Consumer electronics are often viewed as semi-disposable objects and consumers are increasingly losing the ability to modify, repair and truly understand how their devices are made. Designing their phone enables us to influence the supply chain as well as the lifecycle of the product, addressing factors such as the longevity and the repairability of the device. They’re using design to change the way people relate to their products with the aim of empowering buyers to have more control and ownership over their phone.

For the Fairphone 2, they invested in an original design to take our ambitions for fairness even further. This approach gives them more oversight of their supply chain, increases transparency and lets them build deeper relationships with (sub) suppliers. It also allows us to incorporate their values directly into the phone itself, especially ownership and longevity. The Fairphone 2 is built around a modular architecture, making it easy for owners to open and repair their phones by themselves. This repair model, combined with carefully selected components, will lead to a longer lasting device and give owners more responsibility for keeping their phone in working order.

They’re working to bring more fairness to software. In line with our overall design objectives, their software strategy focuses on openness, transparency and ownership with which they aim to achieve greater product longevity. They’re using open source methods to help them achieve our goals. This includes striving to make their operating system (OS) source code and development environment available for anyone to use, review, modify and improve. They are also in discussions with organizations that build alternative operating systems to give their users more choice.

For this project, they created 3D-printable case designs using ideas from our community and partnered with 3D Hubs to print them on demand. This project is an experiment in distributed production – eliminating the need for long-distance shipping and producing excess stock. It also gives buyers the opportunity to interact with their local community and gain a deeper understanding of where their products come from.

A Life Cycle Assessment (LCA) is a quantitative tool used to assess the environmental impact of a product or service. They completed our first LCA in April 2014. This analysis helped us identify hotspots for reducing our environmental impact, and will help shape future decisions regarding shipping methods, component suppliers, materials, recycling and more.

Fairphone started in 2010 as a campaign to increase awareness for the use of conflict minerals in consumer electronics. In 2013, Fairphone formally transitioned from a campaign to a formal company. Over the past two years, Fairphone has produced and sold 60,000 first edition Fairphones using a pre-order model to maintain its financial independence. At the same time, the company has built an active community to expand the movement for fairer electronics. These achievements have recently earned Fairphone multiple awards, including “fastest growing tech startup in Europe” from The Next Web and ProSiebenSat.1 Accelerator Startup prize from GreenTec. In June 2015, Fairphone was officially certified as a B Corporation, making it the first mobile phone manufacturer to earn this certification.

Social enterprise Fairphone is using crowdfunding to maintain its independence and kick-start production of the first phones. The Fairphone 2 is available in Fairphone’s online shop. Customers can now pre-order the latest Fairphone to show their support for the company’s mission to create a fairer electronics supply chain and help finance the initial phases of Fairphone 2 production. The social enterprise’s upcoming phone features game-changing modular architecture for increased longevity and repairability.