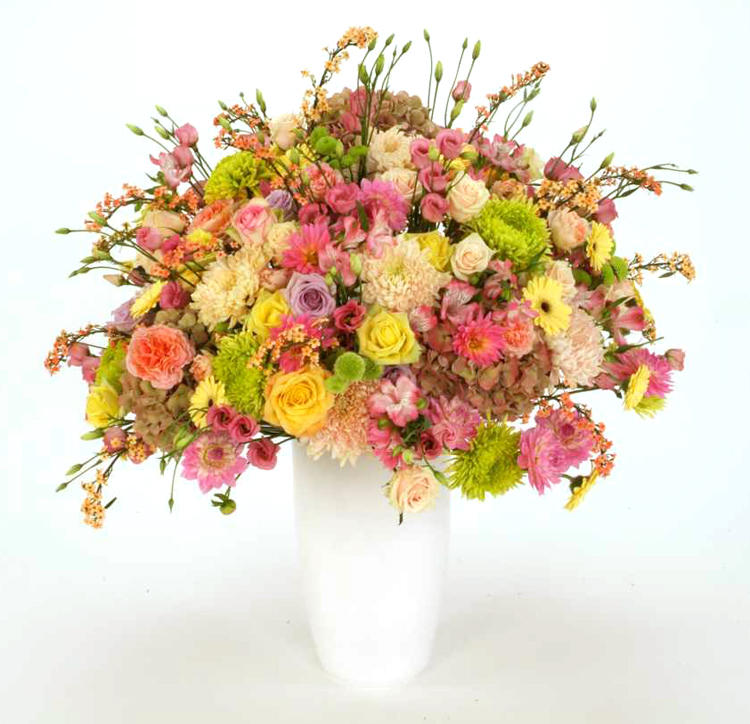 From October 31 through April 20, the Jewish Museum's lobby will feature a floral sculpture by Dutch artist Willem de Rooij..

From October 31, 2014 through April 20, 2015, the Jewish Museum’s lobby will feature a site-specific foral sculpture by Dutch artist Willem de Rooij titled Bouquet XI. The artist’s first solo presentation at a New York museum, Bouquet XI is a nearly ten-foot-tall floral sculpture comprised of colorful and diverse Middle Eastern flora. This work is the third iteration of Using Walls, Floors and Ceilings, a series showcasing new works by artists from around the globe in the Skirball Lobby. The series builds on the Museum’s 1970s program called Using Walls, which featured the work of 14 up-and-coming international artists of the time such as Richard Artschwager, Sol Lewitt, Richard Tuttle, and others. Now, nearly 45 years later, the Museum is revisiting this moment in its history by showcasing new work by emerging artists from around the globe.

Placed prominently in the entrance lobby, Bouquet XI may be confused with grand arrangements often found in public reception areas, but its grand stature and wildly varedm all-over composition reveals its uncommon status. Created in collaboration with floral designer Bella Meyer, each species contributes to a sensory experience that is both visually lush and physically impactful.

In 2002, de Rooij began collaborating with Jeroen de Rijke (1970-2006) on the Bouquet series, a group of floral sculptures with distinct thematic conceptions and arrangements Bouquet XI is comprised of floral species indigenous to the Middle East – inspired by the fact that Israel, like de Rooij’s native Netherlands, is a major flower exporter. Bouquet XI is comprised of allergenic flowers that may interrupt a pleasant viewing with sneezes, snuffles or a stuffed nose. The drifting pollen alludes to the conflicts and harmonies that arise when borders are traversed and cultures collide, while the display of Middle Eastern flora, thousands of miles from their native habitat, hints at other global forms of movement, such as trade and commerce. To maintain this experience, the flowers of Bouquet XI will be replaced weekly.

Based in Berlin, Willem de Rooij is a Dutch artist who has worked in a variety of mediums including film, photography, and textiles. Much of his work emphasized its own inherent material qualities and mechanism of production in an effort to question contemporary art’s reliance on external cultural, historical and personal references. De Rooij’s art has been prominently exhibited in Europe, including in the Dutch pavilion at th 2005 Venice Biennale. The Jewish Museum’s presentation is the artist’s first solo installation at a New York museum. Bouquet XI will be realized in collaboration with noted flower designer Bella Meyer, who is the founder and creative director of the New York flower shop and design studio Fleurs Bella in Greenwich Village.