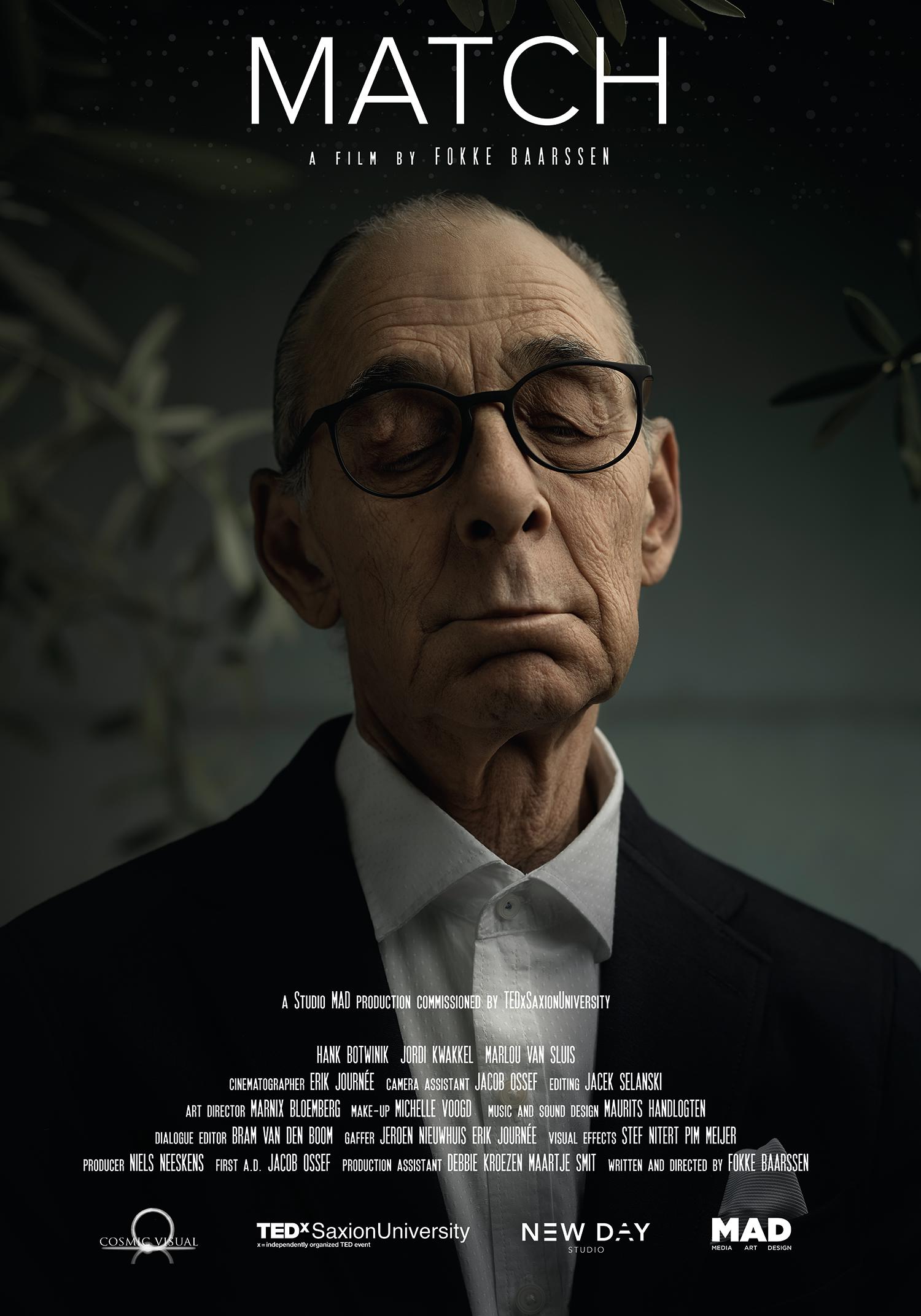 From April 27 until May 1, four Dutch films will be screened at the annual NYC Independent Film Festival.

From April 27 until May 1, four Dutch films will be screened at the annual NYC Independent Film Festival. “Match,” a short film by Fokke Baarsen, will explore the struggles between eternal love and technology, while documentary “See No Evil” of Jos De Putter portrays the daily life of three formerly famous elderly apes. In the music department, “The River Man” captures a real-life lovestory between a man and his river, featuring sound design by Niels den Otter, and “Waiting” portrays the struggles of three Italian immigrants under a score by Mark de Wind.

The festival generously offered a 20% discount for all our followers. When purchasing tickets, fill in the code DUTCH2016 to receive a reduced ticket fare.

In the distant future, lovebirds David and Rachel test their love for each other by using gene cards. The cards prove them to be a match, but eternal love and technology don’t necessarily have to go hand in hand. Years later, an elderly David looks back on his life, revealing that the gene cards were unable to predict everything correctly..

“Match” is a co-production by Studio MAD, NEW DAY studio, and Cosmic Visual. The film is directed by Fokke Baarssen.

Baarssen is an engaged filmmaker, who has previously won two awards at the Garden State Film Festival. He continues to develop himself as an all round filmmaker, switching from directing, writing and producing to editing and cinematography. His latest short film “Match” is being submitted to numerous film festivals in the world. Fokke is developing another short fiction film and a feature documentary, both projects aiming for a 2017 release.

“See No Evil” portrays the daily life of three famous elderly apes who spend their days in retirement homes; a movie-star, a scientist and a cripple. We have watched and taught them for many years, as they have watched us. A sometimes bitter, poetic recapturing of the intriguing relationship between Chimp and Man, as ‘remembered’ by the protagonists.

“See No Evil” is directed by Jos De Putter.

After working as a film critic, De Putter has been making films since 1993.  For example, “Dans, Grozny dans” (2002) has won eight international festivals and was sold to numerous countries. In 2005, Jos de Putter was honoured with a presentation of all his films in the National Gallery of Art (Washington), the Brooklyn Academy of Music (NY), and the Berkeley Art Museum and Pacific Film Archive in California. Most of his films have also been shown in The Museum of Modern Art (New York) and on numerous festivals all over the world.

Connie Corcoran is one of Ireland’s great fishing guides. But, if the salmon stocks continue to decline at their current rate, he may be one of its last. He has dedicated his life to the mighty Blackwater river and, over the years, its currents have shaped him. The River Man is a portrait of Connie and the Blackwater. It is a love story between a man and his environment.

“The River Man” is directed by Richard Gorodecky, but the sound design and still photography are by Niels den Otter.

Niels den Otter is a young musical professional. He started playing violin at an early age, and ended up smashing records with two turntables. This broad musical background formed the basis for starting of as a composer/producer and sounddesigner. Having worked his way up from intern to candidate-partner at the renowned soundstudio FC Walvisch, he switched in 2007 to the fresh music company called Sizzer. Late June 2010 the big moment was there and the decision was made to start his own company: Audentity.

“Waiting” is a documentary about a longing for validation as a modern settler. It follows three Italian immigrants that aim for a second chance in life in New York City. Floriano Pagliara is a professional boxer looking for self-validation. Paolo Buffagni is a former actor without any musical instruction, who reinvents himself as an opera singer at 30. Paolo Inferrera ultimately wants to open a restaurant in New York. The men all try to redeem themselves in order to find their true Identity.

The film is directed by Cristian Piazza, while Dutch composer Mark Wind was responsible for its score.

Mark Wind is a film composer and producer, and works from his studio in the Netherlands. He started composing only in February 2013, and immediately took the international stage with the celebrated symphonic and synthesizer score to the British horror movie The Apostate (2014). “Waiting is his second score.

The NYC Indie Film Festival provides a showcase for the best in independent cinema, including short films, feature films, music videos, and animated works. With panels, parties and a week-long gathering of fellow indie filmmakers, the 7th Annual New York City Independent Film Festival is the place to be April 27 – May 1, 2016. The festival strives to promote an open and nurturing environment for artists, writers, actors, film-makers and fans. They will be screening the best indie films and offering panels, classes, seminars and discussion groups as well as opportunities for the filmmakers and fans to mingle and network.