A New Look at a Van Eyck Masterpiece

January 25 - April 24, the Met has a focus exhibition presenting a recent study on Van Eyck’s "Crucifixion" and "Last Judgment."

From January 25 until April 24, the Metropolitan Museum has a focus exhibition presenting the findings of a recent study on Jan van Eyck’s “Crucifixion” and “Last Judgment.” 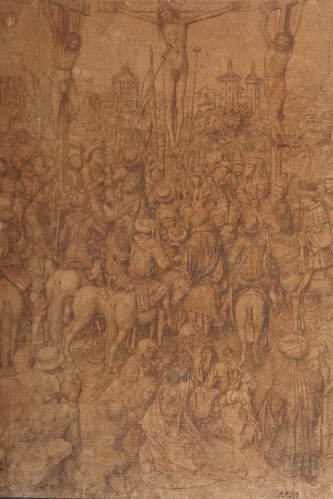 In a collaboration at the Met between Maryan Ainsworth, a Curator in the Department of European Paintings, and the Department of Paintings Conservation, these paintings and their frames have undergone technical investigations in an effort to solve long-standing mysteries about them. Whether the paintings were always intended as a diptych, or whether they were originally the wings of a triptych whose centerpiece has long disappeared, has been in question. The answer may be found not only in a closer look at the frames, but also in the relationship of the Metropolitan’s Crucifixion painting to a recently rediscovered drawing of the Crucifixion attributed to Jan van Eyck (ca. 1390-1441) that has been acquired by Museum Boijmans Van Beuningen in Rotterdam, and will also be on view in the Met’s exhibition.

New infrared reflectography now affords an opportunity to compare the underdrawings of the “Crucifixion” and “Last Judgment” paintings with the Rotterdam drawing. In addition, X-radiography of the paintings’ frames has revealed another text, albeit very damaged and fragmentary, on the flat part of the frame beneath the gold overpaint. The text is in Flemish, in Gothic miniscule script, as opposed to the Latin pastiglia (raised lettering) on the interior cove of the two frames. This introduces new clues regarding the original form and function of the two paintings, as the exhibition will demonstrate. 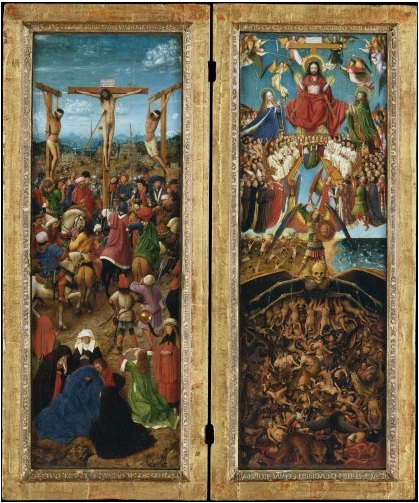 An accompanying publication, “An Eyckian Crucifixion Explored: Ten Essays on a Drawing,” will present the views of leading scholars on the newly discovered “Crucifixion” drawing and its relationship to the Met’s painting. It will be published by Museum Boijmans Van Beuningen. Additional objects drawn from the Metropolitan’s Museum’s collection will be presented as contextual material and will include paintings by Fra Angelico and Pietro Lorenzetti, prints, a rosary bead, boxwood and ivory diptychs, illuminated manuscripts, enamelwork, and portrait medals.

The technical investigation of the Metropolitan’s “Crucifixion” and “Last Judgment” is part of a longer ongoing study of Van Eyck’s works, including the cleaning and restoration of the Ghent Altarpiece, one of the seminal works of Western European art, and a comprehensive study of the artist’s oeuvre through the Verona Project at the Institut Royal du Patrimoine Artistique (KIK/IRPA) in Brussels. A Sunday at the Met program on April 17, 2016, will present the findings of these groundbreaking investigations.